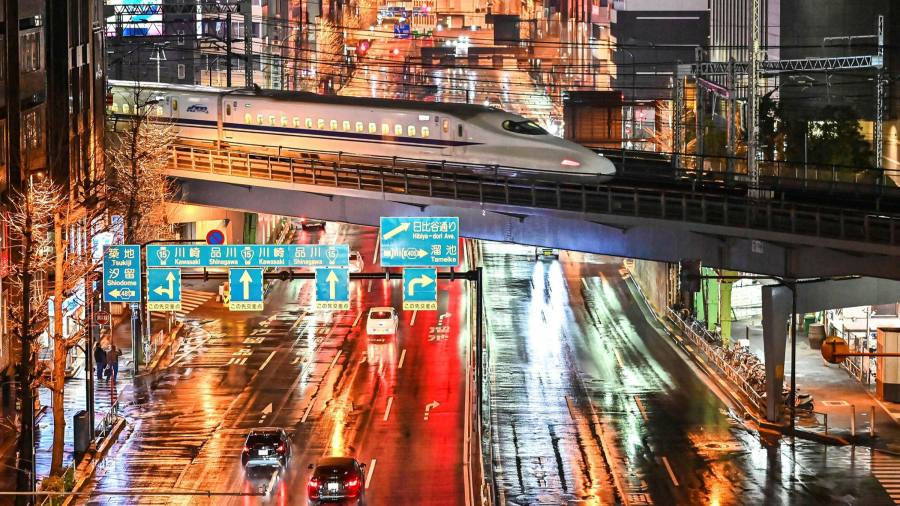 Petty. Embittered. Absurd. There are plenty of words that have been applied to the legal skirmish centring on an unnamed bullet-train driver, a slightly overdue arrival at a depot in western Japan and the ¥43 ($0.37) his employer docked from his wages.

The word that feels glaringly absent in all this, though, is “bargain”.

Because this case, vehemently fought on the narrowest of financial battlegrounds, teetering on the cliff-edge of human redundancy and deeply revealing of the modern Japanese workplace, has also provided the country with an unusually accurate price for one of the great national intangibles.

That ¥43 — both miserable and misery-causing — stands as a measurable token of sloppiness in a segment of the transport industry that runs on absolute precision. Viewed in those terms, ¥43 has emerged as the molecularly small cost for Japan of having a high-speed rail network whose punctuality and frequency is the envy of the world.

The case, whose implications have been hotly debated in recent weeks, arose from an incident that took place in June last year, and which (some argue crucially, others say irrelevantly) caused absolutely no inconvenience to any passengers.

A driver on the West Japan Railway Company (JR West), whose job that day was to take an empty train from platform to depot, realised he was waiting on the wrong platform. On sensing the crisis, it took him a minute to race to the correct platform and the delayed transfer prompted a knock-on lateness of an additional one minute arriving at the depot.

JR West, which operated 378 bullet trains a day in fiscal 2020 with an average lateness across the year of 12 seconds, withheld ¥85 from the driver’s salary to pay for the two minutes that, in the company’s view, he was not technically working. The driver, citing human error and arguing that he was never absent from work, appealed to the local labour standards bureau and saw this penalty reduced to ¥43 for the unworked minute he was running between platforms and adjusting for his alleged mistake.

But the driver, still unhappy, is suing JR West not only for the ¥43, but an additional ¥13 overtime and a heftier (though arguably pretty modest) ¥2.2m damages for the emotional torment of the whole affair.

Many features of the tale stand out. It is highly noteworthy, in a work culture that tacitly expects (or bullies) many to work unpaid “service” overtime, that JR West has chosen to measure work, or its absence, in increments of single minutes. How far down that same road might the rest of corporate Japan decide to press if a prolonged mishandling of a printer jam or mistaken lift journey to the wrong floor were judged and fined as time unworked? And if minutes are judged big enough to be units of punishment, why are they still deemed too small as units of overtime reward?

Far more interesting, despite the driver’s protests and the online howls of corporate cruelty, is the question of why JR West dealt with a mistake with such a modest punishment. The facts appear to be that the driver charged with driving a vehicle built to run at 320km/h and to the strictest of schedules made a mistake. This mistake happens to have come without serious consequence but was made in a realm where, clearly, others might not.

If JR West were revealed to keep its staff error-free with an iron-fisted system of fines — say a month’s pay for an incident like this — we might conclude that the famed punctuality was built on a regime of fear. That regime may well exist, but this incident suggests it requires only the tiniest of punishments to instil the appropriate levels of terror.

That leaves the more nebulous issue of incentive — which may be explained by the fact that, in the land of robot manufacturers, JR West (in common with its counterparts in central and eastern Japan) consistently ranks high among Japan’s most desirable employers for school and university graduates. There is a sense that Japanese railway companies have long converted that desirability into obsessive perfectionism among staff.

For the past few weeks, the rail companies have been able to double-down on the implication that staff should feel grateful to be working for them. Last week, JR East tested an autonomous bullet train on a commercial track and it was deemed “almost equal” to a human.

All that may explain how ¥43 fines ensure that average annual lateness is measured in seconds. The extreme rarity of the driver’s noisy public protest suggests the financial micro-punishments — perhaps with a few existential threats of being replaced by robots — are quietly doing the trick.