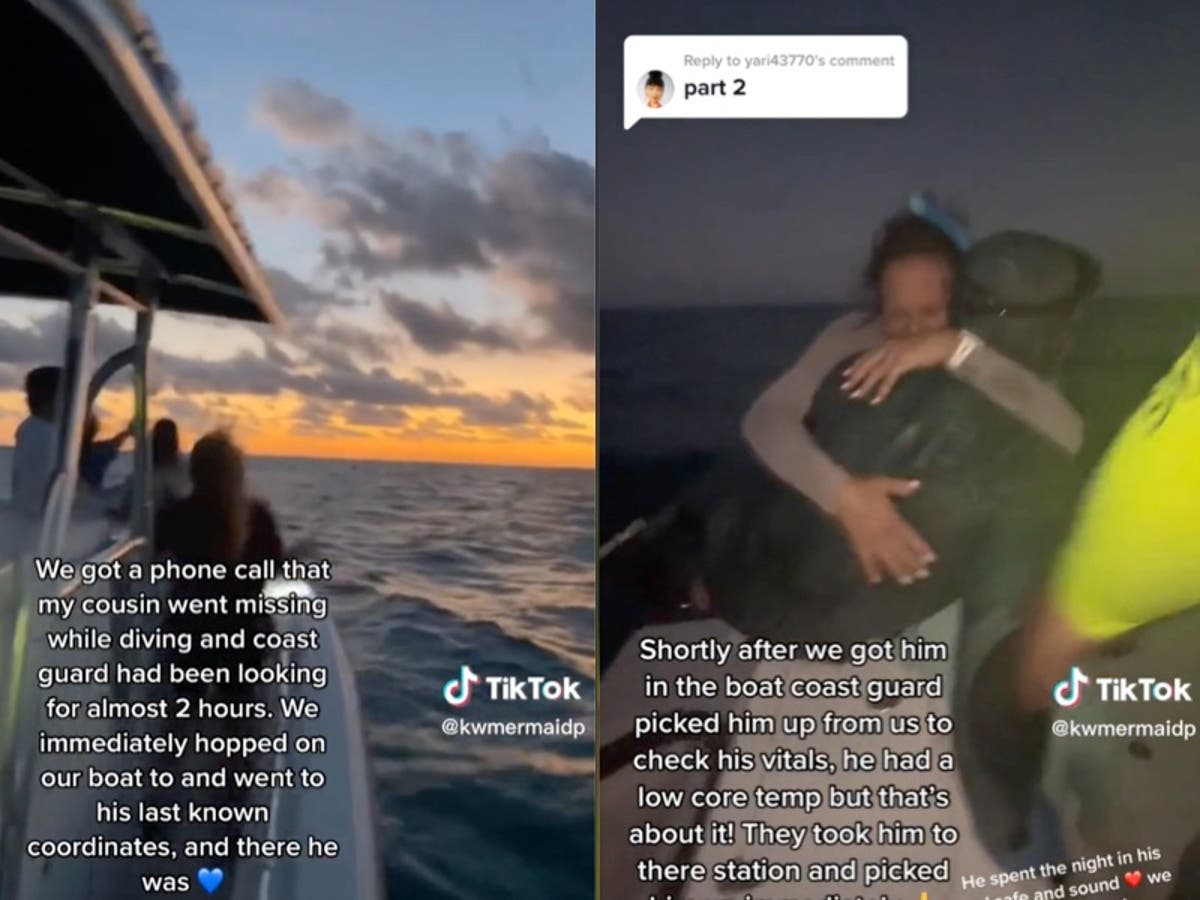 A family has recounted the emotional moment they rescued their 22-year-old family member from the sea after he’d been missing for hours.

Priscilla Gartenmayer posted a video on TikTok of the rescue, which took place in Key West, Florida, and reflected on her family’s quest to save her cousin, Dylan Gartenmayer. Dylan had been spearfishing and freediving with a group of friends when he got separated from the boat.

In the video, which was filmed aboard a boat belonging to Dylan’s grandfather, the Gartenmayer family could be heard shouting excitedly as they first spotted the 22 year old drifting in the shark-infested waters.

“We got a phone call that my cousin went missing while diving and the Coast Guard had been looking for almost two hours,” Priscilla wrote in a text caption on the video. “We immediately hopped on our boat too and went to his last known coordinates, and there he was.”

In a follow-up video, which was taken at dusk, Priscilla shared more footage from the emotional reunion during which her family, including Dylan’s parents, helped the 22 year old out of the water and onto the boat.

Immediately after Dylan was lifted onto the boat, his mother could be seen hugging him tightly.

“Shortly after we got him in the boat, the Coast Guard picked him up from us to check his vitals. He had a low core temperature but that’s about it!” Priscilla wrote in the text caption on the video, adding: “They took him to their station. “He spent the night in his bed safe and sound. We are so grateful.”

In the caption of the video, Priscilla reiterated her relief, writing: “We’ve lived in Key West for many generations and we have fallen family members who we let to rest at sea, and we really feel like they protected him.”

In the comments, viewers have shared their own emotional responses to the videos. “Crying for strangers on TikTok is my new hobby. What a miracle!” one person wrote, while another said: “What a gift. So happy for you all.”

“This is not the usual outcome of these situations and I’m beyond happy for you guys it is,” someone else wrote.

The viral videos of the rescue also prompted interest in Dylan’s story, with many urging Priscilla’s cousin to share additional details about the incident.

In follow-up videos, Priscilla handed the camera to her cousin, who shared his version of the story. According to the 22 year old, he got separated from his group due to a “mix of conditions.” He noted that the Gulf Stream was contributing to the current, and that he made a dive longer than he’d usually make.

“When I resurfaced, they’d never seen me resurface,” he explained, adding that the current took him away quickly and he got to a point where the boat had “disappeared”.

Dylan went on to say it was at that point that he realised his situation was serious, so he removed the weights in his pockets he’d been using to freedive with. He also recalled how he’d already become cold and had started to shiver, but that he’d gotten “lucky” because a piece of bamboo big enough for him to use as a raft drifted by shortly after.

During his time in the water, which he speculated was 150-feet deep, Dylan attempted to steer himself in the right direction.

“I’d seen the sun disappear, I knew things were starting to get a little more dire at that time,” he recalled, adding that, although he lost his bamboo raft, he was able to create a new one for himself by tying mooring balls together. As he waited to be rescued, he encountered a sea turtle and a reef shark, and noted that he could sense activity below him.

Dylan recalled that while he waited in the darkness, he could see the lights of the Coast Guard’s boats and helicopter searching for him.

However, he said that, “by some miracle,” his parents and everyone else on board his grandfather’s boat ended up finding him first.

“I’d heard a boat coming up from behind, from the distance … and I was finally able to turn around … Seeing a bow light, I could hear the engines running and I just knew right from there that that was my grandfather’s boat,” he recalled, adding that his family had stopped and begun randomly searching the horizon for him, at which point his friend Joel spotted him.

In one video shared to TikTok by Priscilla, it showed the moment a neighbor’s camera had captured her and her family speeding down the canal in their boat to rescue Dylan.

In another follow-up video, Dylan expressed his gratitude to both his family and the US Coast Guard for their help.

Of his emotional reunion with his family aboard his grandfather’s boat, Dylan told NBC News that his mother grabbed his dive gear and “just started hugging and crying”.

Priscilla also reflected on the moment Dylan was rescued, telling the outlet that it was “really emotional” for her because she and her cousin had grown up diving together.

“So, you know, we know how lucky we are to still have Dylan here,” she said.

On TikTok, the videos of Dylan recounting his experience have each been viewed hundreds of thousands of times.

“I’m crying, this is so freaking scary and beautiful,” one person commented, while another said: “I don’t even know Dylan and I’m crying. What an amazing family.”

Jeremy Ruehlemann dead: Model dies aged 27 as Christian Siriano pays tribute to ‘one of my muses’