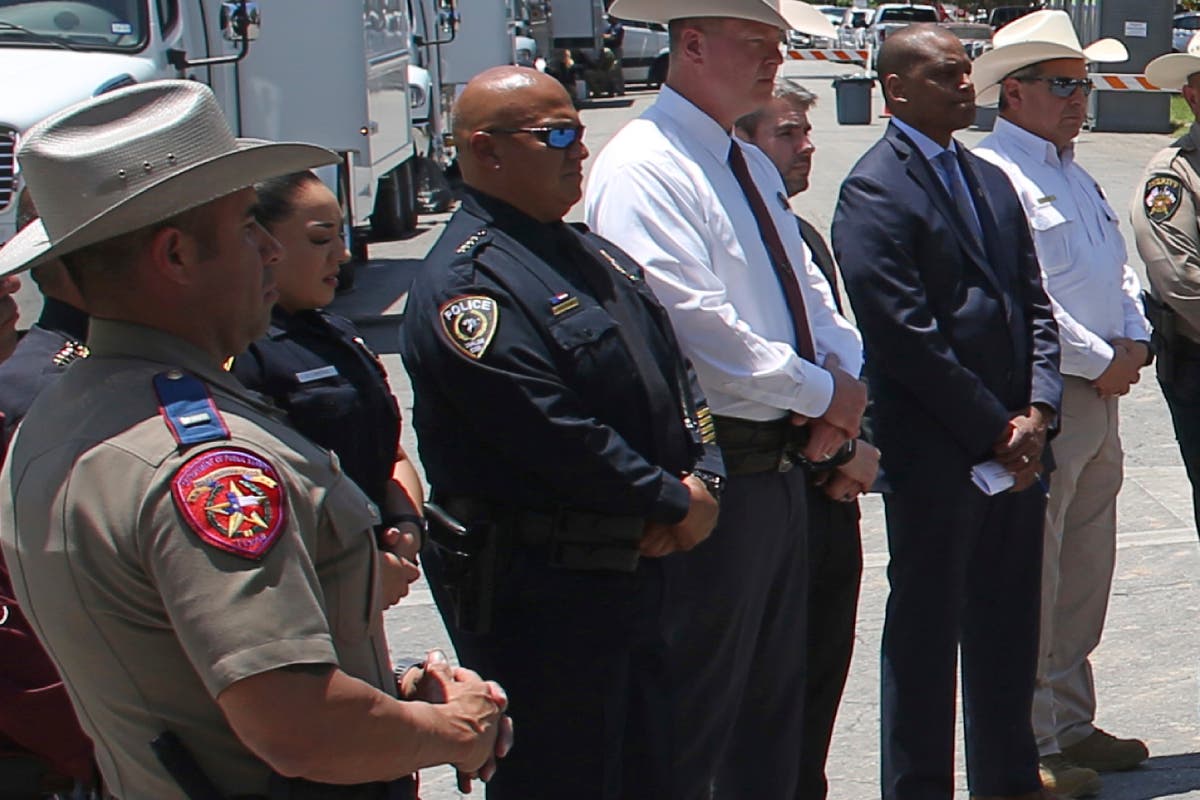 The Uvalde school district police chief criticised for his handling of the massacre that unfolded at Robb Elementary School last month defended the officers’ delay in confronting the teenage gunman.

Pete Arredondo, 50, provided one of the first public accounts on the police response to the elementary school shooting in a wide-ranging interview with the Texas Tribune, making it the first time the officer has given extensive comments on the incident since the deadly mass shooting occurred on 24 May that left 19 children and two teachers dead.

In the wake of the massacre, law enforcement officials in Texas, particularly Chief Arredondo, have come under intense scrutiny for their handling of stopping 18-year-old Salvador Ramos.

One of the key criticisms that have been levelled at the 50-year-old police officer was his apparent decision to downgrade the 24 May incident to an “active shooter” situation to a “barricaded suspect” standoff, as was stated by Steve McCraw, the head of the Texas Department of Public Safety, in a press conference last month.

The resulting delay of nearly an hour has been criticised by numerous victims’ parents and Texas officials.

Mr Arredondo, speaking to the Tribune through his lawyer, George E Hyde, told the news outlet that he never considered himself the scene’s incident commander, nor did he provide any instruction that police should not attempt to breach the school.

“I didn’t issue any orders,” he told the Tribune. “I called for assistance and asked for an extraction tool to open the door.”

“Those are people who just don’t know the whole story that are making their assumptions on what they’re hearing or reading,” he said, noting that the whole experience has been “difficult”.

When responding to the critique about poor radio communications, one of the chief concerns raised about how police handled the May emergency, Mr Arredondo said his reasoning to leave behind his only way to remain in contact with the scores of agencies and officers outside the school was logical one. He wanted to keep his hands free to confront the gunman with his own gun.

The police chief also believed that carrying radios into the building where an active shooter was slaughtering children en masse would only slow him down and waste vital time as he entered the school. He also noted to the Tribune that police radios are known to not always work inside some school buildings.

When confronted with a question about the 911 calls lodged by desperate children inside Robb Elementary School, Mr Arredondo said that he was not aware of the dispatches because, as he noted earlier, he didn’t have his radio on him at the time of breaching the school hallway.

Additionally, Mr Arredondo and the other officers in the hallway reportedly went to great lengths to keep their location from being made known to the gunman.

Mr Hyde, Mr Arredondo’s attorney, defended this position, noting that even if there were police radios present in the hallway, they’d likely have been turned off so as to avoid giving away their location. Information, he added, was instead shared by whispers between the nearly 20 officers stationed outside the fourth-grade classroom while they waited for 77 minutes as the gunman, armed with a semi-automatic rifle, remained holed up with dozens of students.

“Not a single responding officer ever hesitated, even for a moment, to put themselves at risk to save the children,” Mr Arredondo said, rejecting the negative characterisation of his colleagues’ response, which is now under review by the US Department of Justice, as requested by the city’s mayor.

“We responded to the information that we had and had to adjust to whatever we faced,” he said. “Our objective was to save as many lives as we could.”

The police chief’s defense of his actions on that brutal day arrived just as new disturbing details about the delayed police response in the Uvalde school shooting were revealed in an investigative report, described by the New York Times on Thursday.

In the report, it states that “more than a dozen” of the 33 children and three teachers inside the two classrooms targeted by gunman Salvador Ramos in the 24 May massacre were still alive in the one hour and 17 minutes between when shooting began and officers eventually entered to take him down.

Investigators are now working to determine whether any of the victims killed could have been saved had they received medical aid earlier, an official with knowledge of the probe told the Times.

The newspaper noted body-camera video in which a man believed to be Mr Arredondo can be heard saying: “People are going to ask why we’re taking so long. We’re trying to preserve the rest of the life.”

About a week after the shooting, department of public safety officials told reporters that Mr Arredondo was no longer cooperating with the agency and had failed to respond to follow-up interview requests from the Texas Rangers, the agency’s investigative unit.

Mr Hyde, however, countered this claim by stating that his client was unable to do an interview on the day the Rangers asked because he was covering shifts for his officers, adding that Mr Arredondo is willing to cooperate with the investigation but would like to see a transcript of his previous comments.

“That’s a fair thing to ask for before he has to then discuss it again because, as time goes by, all the information that he hears, it’s hard to keep straight,” the lawyer said.

With files from the Associated Press

How cannabis-fed chickens may help cut Thai farmers’ antibiotic use