Europe are facing the prospect of a heavy Ryder Cup defeat as Team USA claimed a share of the afternoon fourballs to take a commanding 11-5 lead into the final day at Whistling Straits.

Steve Stricker’s side followed their largest opening-day lead in 46 years by extending their advantage by winning three of the four points on offer in the foursomes, with the hosts retaining their six-point cushion by claiming two matches in the fourballs session.

Team USA take their biggest lead into the Sunday singles in the modern Ryder Cup era and require just 3.5 points on the final day to regain the trophy on home soil, while Europe need to produce the biggest singles comeback in history if they are to claim an unlikely title defence.

Padraig Harrington’s side showed their fighting spirit in the fourballs and ended a run of three straight sessions lost, with world No 1 Jon Rahm continuing his unbeaten partnership with compatriot Sergio Garcia to defeat Brooks Koepka and Harris English 2&1 in the top match.

Shane Lowry claimed the first point of his Ryder Cup career when he teamed up with Tyrrell Hatton to see off Tony Finau and Harris English, while Rory McIlroy suffered his third defeat of the week when he and Ian Poulter were despatched 4&3 by Dustin Johnson and Collin Morikawa.

The prospect of Europe winning the session and closing the gap to four points – the same margin they overcame in the ‘Miracle at Medinah’ in 2012 – seemed a possibility when Tommy Fleetwood and Viktor Hovland moved ahead in their match, only for Bryson DeChambeau and Scottie Scheffler to claim four consecutive holes and register a 3&1 victory.

Rahm made a tap-in birdie at the first and responded to Spieth making a 15-foot eagle at the par-five second by winning the third with a par, before holing a 45-foot birdie at the next to move Europe two ahead.

The pairs exchanged pars at the fifth, where Spieth and Rahm’s caddie were involved in a dispute where the world No 1 should drop his ball after finding water off the tee, with the Spaniard then making a 25-foot birdie the seventh to extend Europe’s lead.

Koepka rolled in a 15-footer at the eighth and converted from half the distance at the 10th to get within one, before the four-time major champion birdied the 13th to level the contest. 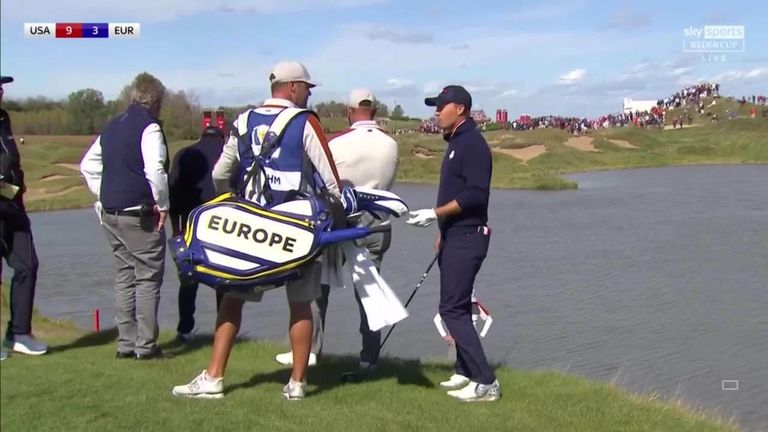 Europe took control of the match when Rahm followed a birdie at the 15th by holing a 30-footer at the par-five next to win the hole, with Garcia making an impressive up and down from the thick rough at the par-three next to win another point for the Spanish pair.

English holed a 20-footer to match Lowry’s tap-in birdie at the first and both players took advantage of the par-five next, with the Irishman nailing a 25-footer at the third and then exchange birdies with Finau from eight feet at the par-four sixth.

Lowry made a 20-foot birdie at the 10th to stay one ahead, where English rolled in from eight feet, before Hatton doubled their advantage when he holed from 15 feet at the 12th but saw Finau respond with a birdie at the next.

Hatton nailed a 35-footer at the 14th to match English’s birdie at the next and keep Europe ahead, with the two teams exchanging birdies at the par-five 16th before Lowry silenced the home crowd by holing a 12-footer to save par at the last and earning the point.

DeChambeau looked angered by being made to hole his two-foot putt for par at the first, with Scheffler and Hovland exchanging birdies at the second before the Norwegian made a 15-foot birdie at the fourth to move ahead. 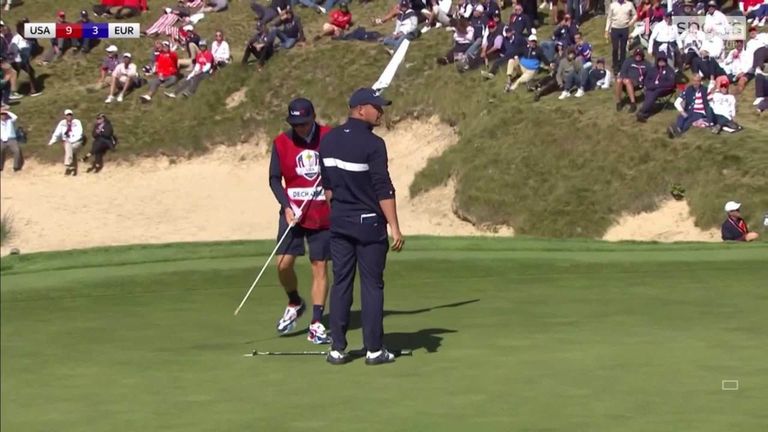 A 25-foot birdie by DeChambeau levelled the match at the fifth and Scheffler matched Hovland’s birdie at the next, before Scheffler made a tap-in birdie to win the seventh but lost the eighth when both American players made bogey.

Europe reached the turn ahead when Hovland birdied the ninth, only to lose to a 30-foot DeChambeau birdie at the next but move back into the lead when Fleetwood made a two-putt par to win the 12th.

DeChambeau birdied the 14th and Schauffele slotted in from 15 feet to birdie the next, with Scheffler adding another at the par-five 16th and winning the point with a par at the 17th.

Johnson converted from 12 feet at the first, where Poulter opened with a 25-foot birdie, with a two-putt gain at the par-five next moving Team USA ahead. McIlroy had to take a drop after a wayward drive at the fourth, as Poutler halved the hole with a par before levelling the contest with a 30-footer at the fifth.

Morikawa drove the par-four sixth green and rolled in from 12 feet to eagle the sixth, with the two-time major champion birdieing the seventh and claiming a winning par at the eighth to give the American pair a three-hole advantage at the turn.

Poulter almost hold his approach into the 10th and halved the hole with a birdie, with the Englishman matching Morikawa’s birdie at the 14th before the American completed a convincing victory with a 20-foot birdie at the par-four next.

Can Europe make a historic comeback and retain the Ryder Cup? Watch ‘Live from the Ryder Cup’ from 2pm on Sky Sports’ dedicated Ryder Cup channel on Sunday, ahead of full coverage of the singles from 5pm.