The US signalled that it was close to a deal with Germany to resolve a longstanding dispute over the Nord Stream 2 pipeline, including a pledge to punish Moscow if it were to use energy as a weapon against its neighbours.

The likely agreement comes in the wake of a bilateral meeting last week at the White House between US president Joe Biden and Germany’s chancellor Angela Merkel.

“The Germans have put forward useful proposals, and we have been able to make progress on steps to achieve that shared goal, again that shared goal being to ensure that Russia cannot weaponise energy flows,” Ned Price, the state department spokesperson, said during a briefing on Tuesday.

“We don’t have any final details to announce yet but I expect we will be able, in a position, to say more soon,” he added.

The Nord Stream pipeline connecting Russia with Germany has long been a sore point between Washington and Berlin. US officials consider it Vladimir Putin’s geopolitical project to keep Europe dependent on Russian energy while jeopardising the security of central and eastern European countries such as Poland and Ukraine.

According to the prospective agreement between the Biden administration and Germany’s government, which was first reported by Reuters, Berlin would pledge to threaten to impose sanctions on Russia if Moscow’s energy policies endangered US allies in the region. US officials have been consulting with Warsaw and Kyiv as they negotiated the pact with Germany. 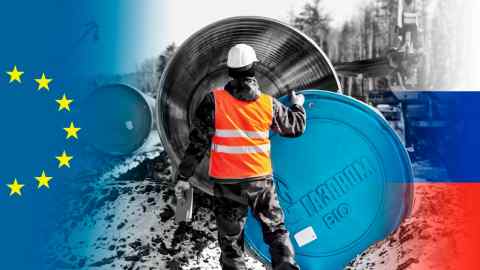 A possible deal with Germany comes as Biden is trying to patch up transatlantic relations after Donald Trump’s tumultuous four years in office, which were marked by tensions with many European capitals.

Biden’s move earlier this year to impose new sanctions on Russians connected with the Nord Stream 2 pipeline — while waiving punitive measures against the European operator of the pipeline — opened the door to the negotiations that are being finalised.

Biden has said he still disagrees with Merkel on the merits of the pipeline, but his administration had to accept that it was almost fully completed by the time he took office in January.

“It made more sense to work with the chancellor on finding out how she’d proceed based on whether or not Russia tried to, essentially, blackmail Ukraine in some way,” Biden said last week.