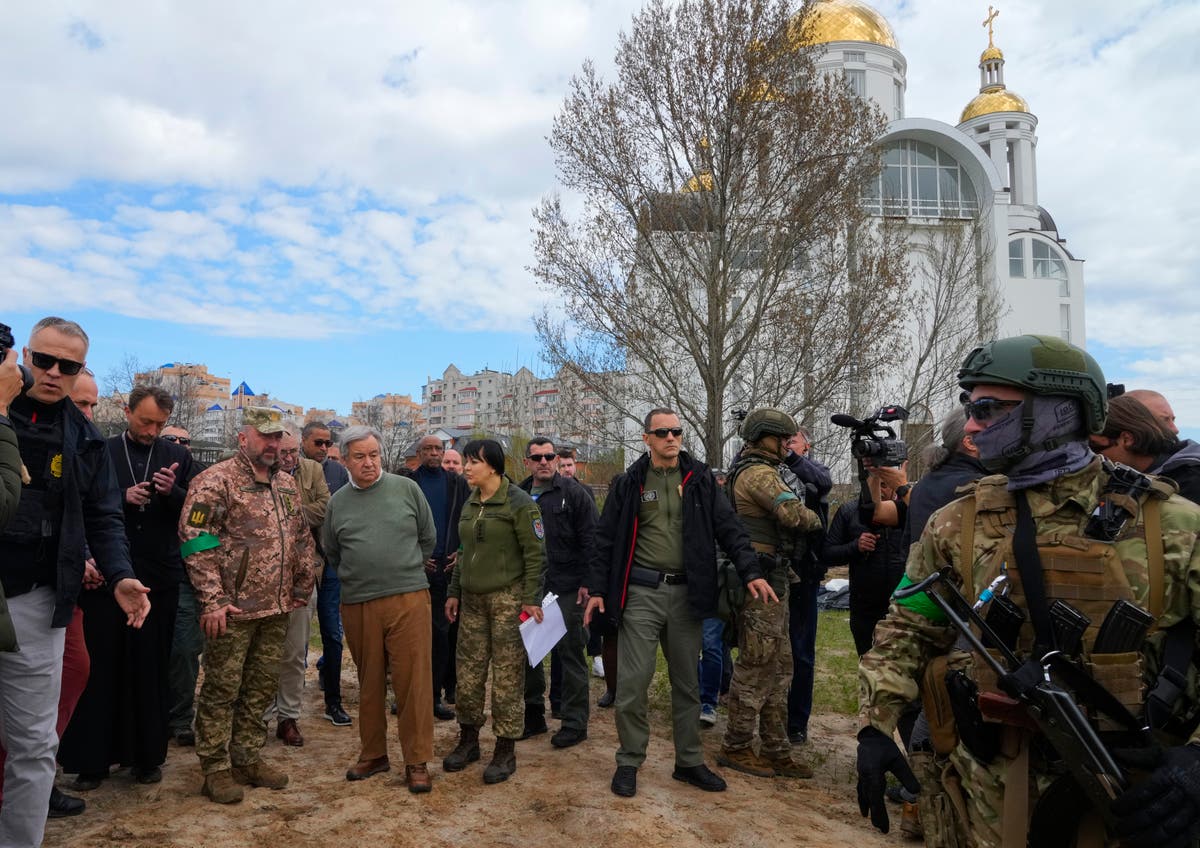 The United Nations has condemned Russia’s attack on Ukraine as “shocking” after secretary general Antonio Guterres’ visit to the destruction-hit areas in and around capital Kyiv amid renewed bombardment from Moscow’s troops on Thursday.

Kris Janowski, UN spokesperson in Ukraine, said in a statement that it had been “a sad and shocking experience to visit these places, they are very damaged, and the people traumatized by what has happened to them”.

Ukrainian rescue workers on Friday recovered a corpse from the rubble of a building in Kyiv that was hit by a missile, mayor Vitali Klitschko said. The death was the first reported in Thursday’s attack in which two Russian missiles struck the capital, Ukrainian officials said.

Russia has not commented on the incident.

His visit came as Russia renewed attacks on Kyiv with bombardment which also struck a residential high-rise and another building and wounded 10 people, including at least one who lost a leg, according to Ukraine’s emergency services.

Explosions were reported across the country, in Polonne in the west, Chernihiv near the border with Belarus, and Fastiv, a large railway hub southwest of the capital.

Mr Guterres said that the “horrific scenario demonstrates something that is unfortunately, always true: civilians always pay the highest price”.

He also surveyed destroyed buildings in Borodianka, northwest of Kyiv, the Secretary-General and called the war “an absurdity”.

The visit comes nine weeks since the Russian invasion began.

“When we see this horrendous site, it makes me feel how important it is [to have] a thorough investigation and accountability,” he said in Bucha.

Earlier this month the Ukrainian government said that mass graves with civilians tied up and “bullet holes at the back of their heads” were found in Bucha where Russian troops were pulling back.

The UN had then raised concerns about the mass graves and possible war crimes.

“Reports emerging from this and other areas, raise serious and disturbing questions about possible war crimes as well as grave breaches of international humanitarian law and serious violations of international human rights law,” UN rights chief, Michelle Bacheletthe High Commissioner had said in a statement.

Mr Guterres urged Russia “to accept to cooperate” with the ongoing investigation launched by the International Criminal Court.

The Independent has a proud history of campaigning for the rights of the most vulnerable, and we first ran our Refugees Welcome campaign during the war in Syria in 2015. Now, as we renew our campaign and launch this petition in the wake of the unfolding Ukrainian crisis, we are calling on the government to go further and faster to ensure help is delivered. To find out more about our Refugees Welcome campaign, click here. To sign the petition click here. If you would like to donate then please click here for our GoFundMe page.

The world should not turn its back on Belarusians