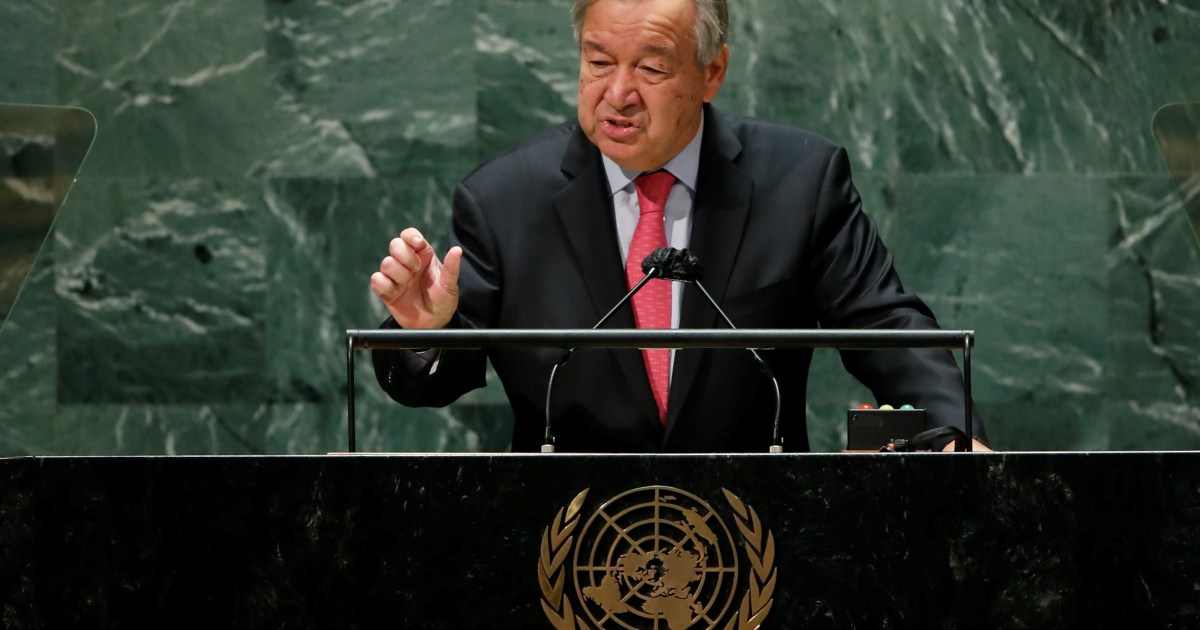 UN Secretary-General Antonio Guterres also urges the world to inject cash into Afghanistan in order to prevent its economic collapse.

UN Secretary-General Antonio Guterres has slammed the Taliban’s “broken” promises to Afghan women and girls, and urged the world to inject cash into Afghanistan in order to prevent its economic collapse.

“I am particularly alarmed to see promises made to Afghan women and girls by the Taliban being broken,” he told reporters on Monday in New York.

“I strongly appeal to the Taliban to keep their promises to women and girls and fulfil their obligations under international human rights and humanitarian law.”

Millions of teenage girls across Afghanistan still await to return to school, while the Taliban allowed boys to attend classes last month. The move has raised concerns about the future of female education under the Taliban, who have pledged to uphold the rights of girls and women in the country when they took over power in August.

The exclusion of girls at this time has aggravated fears that the Taliban could be returning to their hardline rule of the 1990s. During that time, women and girls were legally barred from education and employment.

The group has also named an all-male cabinet, and said that women could be included later.

Guterres said he is “alarmed” to see promises “be broken”, adding that gender equality is a priority for him.

“Broken promises leads to broken dreams for the women and girls of Afghanistan,” the UN chief said. “Women and girls need to be in the centre of attention,” he added.

In his address, Guterres also urged the international community to “inject liquidity into the Afghan economy to avoid collapse”.

“We need to find ways to help the economy breathe again … And this can be done without violating international laws,” he said.

Guterres’s remarks came as a Taliban delegation was set to meet European Union representatives in Doha on Tuesday, according to acting foreign minister Amir Khan Muttaqi.

The meeting will follow the Taliban government’s first face-to-face talks with the United States.

“Tomorrow, we are meeting the EU representatives. We are having positive meetings with representatives of other countries,” Muttaqi said in the Qatari capital.

The group’s diplomatic push followed their return to power as the US ended its 20-year occupation of Afghanistan.

On Saturday and Sunday, they held their first in-person talks with US officials since returning to power. The American side stressed that the meetings did not amount to recognition of the Taliban government.

Muttaqi said the focus of the Afghan delegation was humanitarian aid, as well the implementation of the agreement the Taliban signed with Washington last year which paved the way for the final US withdrawal.

The minister said the Afghan delegation had asked the US to lift its ban on the reserves of Afghanistan’s central bank. He added that the US would offer Afghan people vaccines against COVID-19.

Afghanistan’s economy is teetering on the brink of collapse, with international aid cut off, food prices rising and unemployment spiking.

The Taliban’s efforts to consolidate their rule have also been undermined by a series of attacks by the Islamic State in Khorasan Province, ISKP (ISIS-K), who claimed a bombing of a Shia mosque that left more than 60 people dead on Friday.

US officials to probe whip-like cords used against migrants

Cuba begins vaccinating children as young as two against COVID-19