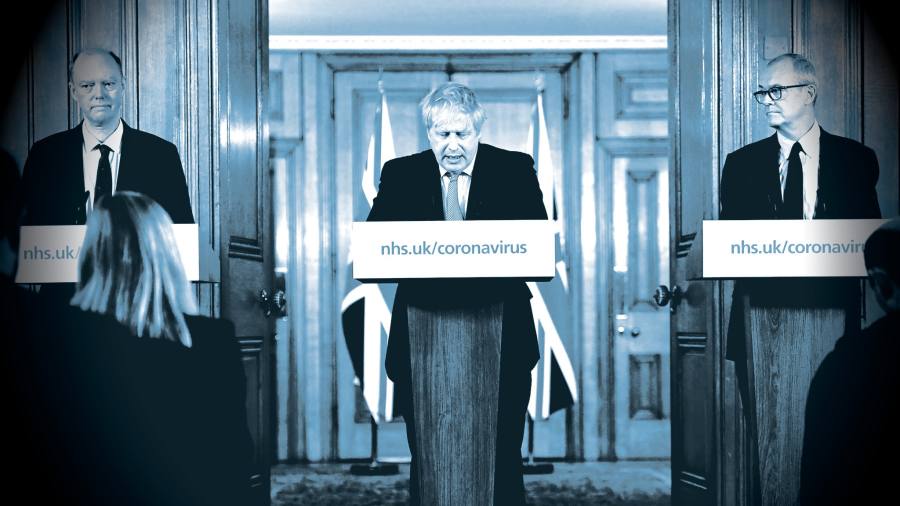 The British government and scientists made a fatalistic decision by backing a strategy that amounted to “herd immunity” in the early stages of the coronavirus pandemic, costing many thousands of lives in “one of the most important public health failures the United Kingdom has ever experienced”, a parliamentary inquiry has concluded.

The joint report — agreed unanimously by 22 MPs from the Conservative, Labour and Scottish National parties — is the first authoritative investigation of the UK response to the pandemic ahead of the full public inquiry promised by Prime Minister Boris Johnson. The MPs accused the government and its scientific advisers of “group think” that failed to take account of effective action to tackle Covid-19 taken elsewhere in the world.

The report by the House of Commons science and technology and health and social care committees said that despite the UK having “some of the best expertise available anywhere in the world”, it had decided to delay lockdowns and social distancing during the early weeks of the pandemic.

Covid has been associated with more than 150,000 deaths in the UK, one of the world’s highest tolls, though as the report notes, international comparisons of mortality rates are not straightforward.

The country was slower to lock down in March 2020 than several other European nations and made an “inexcusable oversight” by failing to launch a successful test and trace operation as many east Asian countries did. Another oversight was failing to impose strict border controls early, which would have reduced the spread of Covid by travellers.

Greg Clark, chair of the Science & Technology Committee, said they acquitted scientific advisers of “deliberately following a policy of ‘herd immunity’ but there was a degree of fatalism that made it an inevitable outcome, given the limited testing capacity at the time and a widespread view that the public would not accept a lockdown for a significant period”.

At every step ministers were warned and they responded with complacency. We need a public inquiry now so mistakes of such tragic magnitude are never repeated again.

The report identified several reasons for the errors in policy and advice early in the pandemic. They include inadequate data on the spread of Covid as a result of failings in the UK testing operation; overreliance on specific mathematical models; underestimating public willingness to comply with lockdown measures; secrecy about the membership and activities of the government’s Scientific Advisory Group for Emergencies (Sage); and a UK-centric attitude that shut out alternative views from elsewhere, particularly east Asia but also elsewhere in Europe.

Ministers were reluctant to impose a lockdown before March 23 last year “because of the official scientific advice the government received, not in spite of it”, the report said. “Government policy did not deviate from the scientific advice it received in any material respect.”

In response to the report, the government said: “Throughout the pandemic we have been guided by scientific and medical experts and we never shied away from taking quick and decisive action to save lives and protect our NHS, including introducing restrictions and lockdowns.”

The MPs pointed out that of the 87 people listed as having participated in at least one Sage meeting, all bar one were from UK institutions. “A degree of group think . . . meant we were not as open to approaches being taken elsewhere — such as earlier lockdowns, border controls and effective test and trace — as we should have been,” they said.

The report found that while ministers had felt “it difficult to challenge the views of their official scientific advisers”, they should have questioned “the assumptions behind any scientific advice given, particularly in a national emergency”. They said there was little evidence that “sufficient challenge” had taken place.

Clark said one important lesson was “the contrast between the great success of the UK vaccines initiative and the poor performance of NHS Test and Trace. They are almost mirror images.”

The vaccines programme thrived as “an effective collaboration between public and private sectors and research institutions,” he said. In contrast, Test and Trace followed a centralised model that rebuffed assistance from universities and other laboratories outside Public Health England, while local public health teams were not harnessed effectively to trace contacts.

Commenting on the report, Jonathan Ashworth, shadow health secretary, said: “This is a damning report by a cross-party group of MPs into the monumental errors made by ministers in responding to the pandemic . . . At every step ministers were warned and they responded with complacency. We need a public inquiry now so mistakes of such tragic magnitude are never repeated again.”

One former Conservative cabinet minister said the report’s criticism of British scientists “means that ministers cannot just say ‘We followed the science’ which was the mantra last year. Science is ultimately not black and white whereas a decision to lockdown is.”