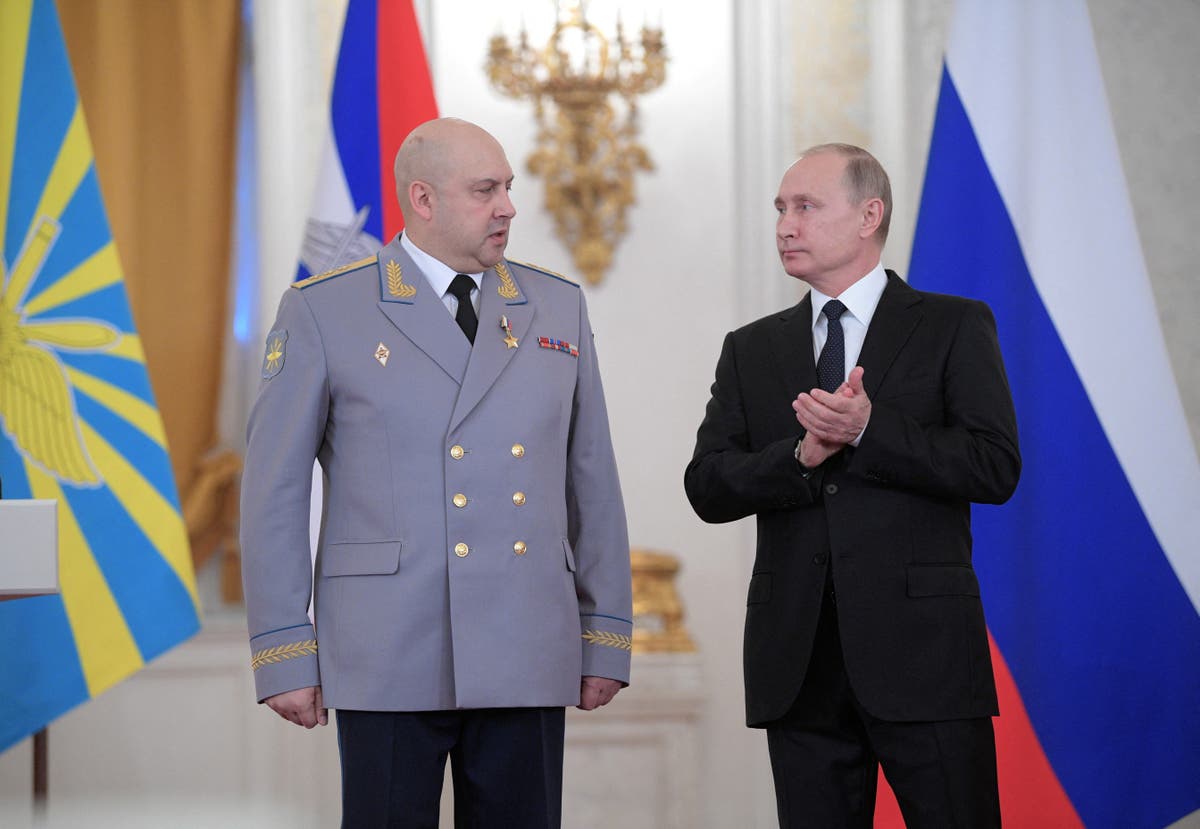 A top Russian general is under pressure to prove that Moscow’s retreat from the Ukrainian city of Kherson this month was worth it.

Sergei Surovikin, nicknamed “General Armageddon” by the Russian media for his ruthlessness, recommended that Moscow’s troops leave Kherson and the west bank of the River Dnipro where they were dangerously exposed.

The decorated war veteran argued that the retreat would save equipment and would allow Russia to redeploy forces – an estimated 30,000 men – from Kherson to offensives elsewhere.

“We await your brilliant results and pray for you, I pray for you every day,” Margarita Simonyan, the editor-in-chief of RT TV and one of the main proponents of the war, told him in a TV broadcast last week.

General Surovikin’s appointment at the beginning of October was the first time since Russia’s invasion of Ukraine that they had publicly named an overall commander for its forces.

However, some Russians believe Surovikin’s appointment was the setting up of a potential fall guy to protect Russian president Vladimir Putin and Defence Minister Sergei Shoigu from direct criticism.

Ukraine’s prosecutor’s office has said its officers have found torture chambers in four buildings in the city of Kherson.

In a post on Facebook, the Prosecutor General’s Office said they had “Inspected four premises” where Russian troops “unlawfully detained people” and “brutally tortured them”.

The investigation found that Russian forces had set up “pseudo-law enforcement agencies” in pre-trial detention centres and a police station while they occupied the city.

The statement continued: “Parts of rubber batons, a wooden bat, a device used by the Russians to torture civilians with electric shocks, an incandescent lamp, and bullets from the walls were recovered.

“People in cells and basements were subjected to various methods of torture, physical and psychological violence.”

All the torture victims are being identified and a pre-trial investigation is ongoing as part of the criminal proceedings over the violation of the laws and customs of war, the Prosecutor General’s Office the statement added.

President Zelensky has urged NATO members to guarantee the protection of Ukraine’s nuclear plants from Russian sabotage, a day after the Russian-controlled Zaporizhzhia plant was rocked by heavy shelling.

“All our nations are interested in not having any dangerous incidents at our nuclear facilities,” President Zelensky said in a video address to NATO’s Parliamentary Assembly in Madrid.

“We all need guaranteed protection from Russian sabotage at nuclear facilities,” he added.

The Russian-controlled Zaporizhzhia nuclear power plant in southern Ukraine was shelled on Saturday and Sunday, raising concern about the potential for a serious accident just 500 km (300 miles) from Chornobyl, the site of the world’s worst nuclear disaster in 1986.

President Zelensky also called for new EU sanctions against Moscow over what he said was its “policy of genocide” as Russian forces bomb crucial civil infrastructure. Russia denies deliberately targeting civilians in Ukraine but acknowledges a campaign of strikes against electric power and other infrastructure.

A Russian commander who argued in favour of Moscow’s forces to retreat from the Ukrainian city of Kherson this month is now under growing pressure to prove it was worth it.

Sergei Surovikin, nicknamed “General Armageddon” by the Russian media for his reputed ruthlessness, on 9 November recommended Moscow’s troops leave Kherson and the west bank of the River Dnipro where they were dangerously exposed.

He argued the withdrawal, completed two days later, would allow Moscow to save equipment and redeploy forces there – estimated by the United States at 30,000 strong – to offensives elsewhere.

Some of those troops have since been moved from southern to eastern Ukraine, where fierce fighting is raging, and the Hero of Russia recipient is under pressure on the cusp of winter to show his bet was the right one.

Vladimir Solovyov, one of Russia’s most famous ultra-nationalist political TV talk show hosts, said last week: “I appeal to the Hero of Russia Army General Surovikin: Comrade Army General, I ask you to complete the total destruction of energy infrastructure of the Nazi Ukrainian junta.”

The appointment of Surovikin on 8 October was the first time Russia had publicly named an overall commander for its forces in Ukraine.

In some Russian circles, his appointment was seen as setting up a potential fall guy while insulating Putin and, to a lesser extent, Defence Minister Sergei Shoigu, from direct criticism.

He added the civilians are receiving medical help.

The head of Russia’s state-run atomic energy agency, Rosatom, has warned there was a risk of a nuclear accident at the Zaporizhzhia nuclear power plant, Europe’s largest, following renewed shelling over the weekend.

Moscow and Kyiv have traded accusations of shelling the facility for months since Russian forces took control of it in March, shortly after invading Ukraine. Renewed shelling on Sunday triggered fresh fears of a possible disaster at the site.

“The plant is at risk of a nuclear accident. We were in negotiations with the International Atomic Energy Agency (IAEA) all night,” Interfax quoted Rosatom CEO Alexei Likhachev as saying.

Rosatom has controlled the facility through a subsidiary since October when President Vladimir Putin ordered Russia to formally seize the plant and transfer Ukrainian staff to a Russian entity. Kyiv says the transfer of assets amounts to theft.

The IAEA has called for the creation of a security zone around the plant, something Mr Likhachev said would only be possible if it was approved by the United States.

“I think the large distance between Washington and Zaporizhzhia should not be an argument for the United States to delay the decision on a security zone,” Interfax quoted him as saying.

The Rosatom head also said it appeared Kyiv was willing to “accept” a “small nuclear accident” at the nuclear power station.

“This will be a precedent that will forever change the course of history. Therefore everything must be done so that no one has in their minds to violate the security of the nuclear power plant,” TASS quoted him as saying.

Volodymyr Zelensky has vowed that Ukraine “will endure” in a speech marking the nation’s annual Day of Dignity and Freedom, which celebrates the Maidan and Orange Revolution protests.

The president hailed the contributions made by Ukrainians – from soldiers, firefighters and medics to teachers giving online lessons, villagers cooking for the military, tailors sewing uniforms and farmers ploughing their fields despite the risk.

“We can be left without money. Without gasoline. Without hot water. Without light. But not without freedom,” Mr Zelensky said, from the presidential palace in Kyiv.

“A lot” has changed since the previous year, he said, remarking: “Craters appeared on our land. There are roadblocks and anti-tank hedgehogs in our cities and villages. It may be dark on our streets. It may be cold in our homes.

He said that in the future Ukrainians would gather on Kyiv’s Independence Square, which was central to the events of 2013/14 and 2004, “where we will celebrate the Victory Day of Ukraine … in a peaceful Kyiv, in a peaceful Ukraine.”

Warsaw could deploy additional Patriot missile launchers near its border with Ukraine, following an offer from Germany in response to the stray missile which killed two people in Poland last week.

“During today’s conversation with the German side, I will propose that the system be stationed at the border with Ukraine,” defence minister Mariusz Blaszczak said.

Western countries must be careful not to create new dependencies on China as they are weaning off from Russian energy supplies in response to Vladimir Putin’s war in Ukraine, Nato chief Jens Stoltenberg has warned.

“We see growing Chinese efforts to control our critical infrastructure, supply chains and key industrial sectors,” he said on a visit to Spain. “We cannot give authoritarian regimes any chance to exploit our vulnerabilities and undermine us.”

Russia has doubled down on its accusations that Ukraine is responsible for the shelling of the Zaporizhzhia nuclear plant this weekend, calling on global powers to ensure that Kyiv ceased its attacks.

The head of the International Atomic Energy Agency – whose officials are due to inspect the Russian-held facility today – warned of a “close call”, after missiles were fired at Europe’s largest plant in attacks on two consecutive days.

“This cannot but cause our concern,” Kremlin spokesperson Dmitry Peskov told reporters. “We call on all countries of the world to use their influence so that the Ukrainian armed forces stop doing this.”

Yesterday, Ukraine’s nuclear energy firm Energoatom accused Russia of “nuclear blackmail”, saying: “The nature of the damaged equipment at the Zaporizhzhia nuclear power plant shows that the attackers aimed at, and disabled, precisely the infrastructure that was necessary for the start-up of reactors 5 and 6.”

‘No discussions’ about second round of mobilisation, Kremlin says

There are no discussions in the Kremlin about a second round of Russian mobilisation, spokesperson Dmitry Peskov has insisted.

Risking widespread anger in Russia, Vladimir Putin announced a “partial mobilisation” in September which saw more than 300,000 people drafted, sparking the largest protests since the invasion of Ukraine and an exodus of fighting-age Russians to neighbouring countries.

Mr Putin said he had ended the mobilisation drive at the end of October, but has not revoked an official decree which provides the legal basis for the draft – a decision which has caused concern among some who say the Kremlin is keeping its options open for a future round of call-ups.

Asked by reporters if Russia was planning a new round of mobilisation, Mr Peskov said: “I can’t speak for the defence ministry, but there are no discussions in the Kremlin about this.”

Man arrested a mile from University of Idaho stabbings not linked to the murders, Moscow police say

According to a source, speaking on the condition of anonymity, Janelle Brown has at last arrived at the same conclusion

R. Kelly Releases Album Titled “I Admit It” While Locked Up For Sex Crimes