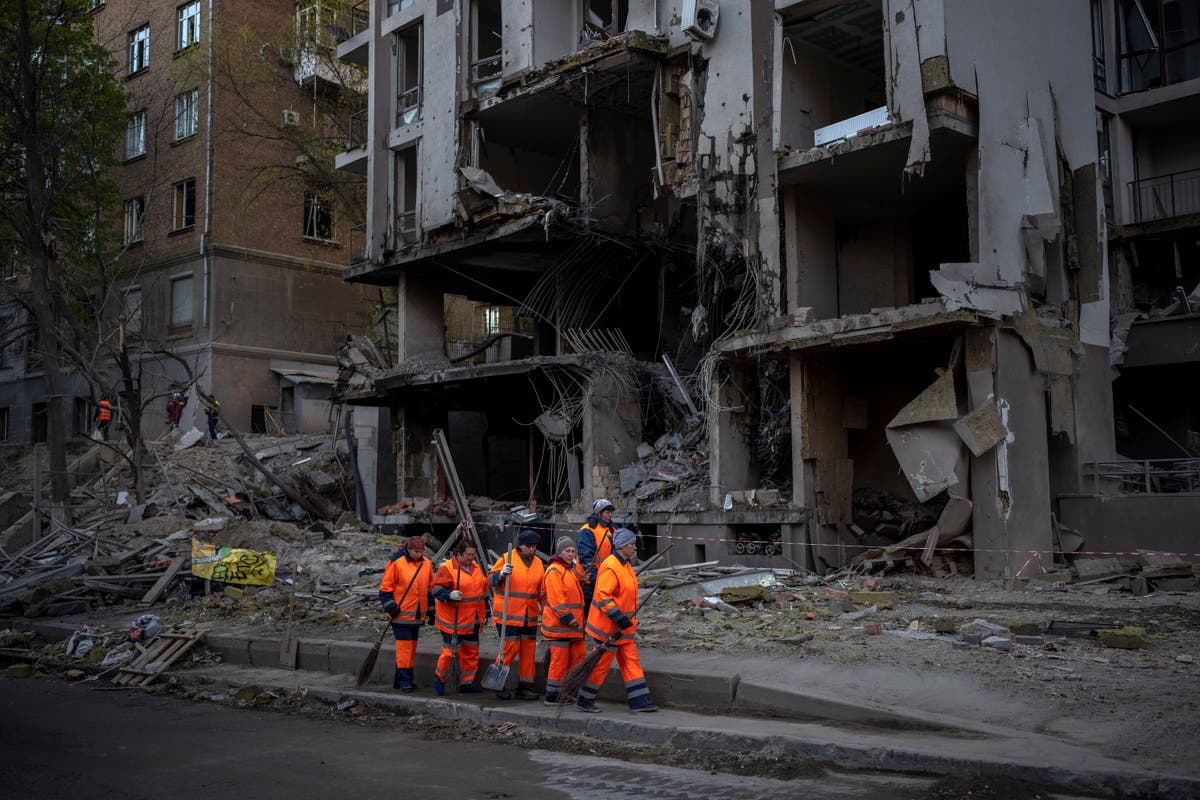 UK non-profit organisation Presidium Network have said that two civilians working as humanitarian aid volunteers were captured by Russian forces on Monday at a checkpoint south of the city of Zaporizhzhia in south-eastern Ukraine.

They were not working for the Presidium Network, which helps to get aid into Kyiv.

It comes as Nato warned the war in Ukraine could last for “months and years,” as the group pledged long-term support to Kyiv.

Secretary-general Jens Stoltenberg made the remarks during a youth summit in Brussels later on Thursday declaring: “We need to be prepared for the long term.

“There is absolutely the possibility that this war will drag on and last for months and years.”

“Maximum pressure” will be placed on the Kremlin to end its invasion, the Nato chief added.

Britain said on Friday it was sending experts to help Ukraine with gathering evidence and prosecuting war crimes, with a team due to arrive in Poland in early May.

Ukraine says it is investigating some 7,600 potential war crimes and at least 500 suspects.

The announcement comes as Ms Truss travels to The Hague to meet with International Criminal Court President, Judge Piotr Hofmanski, and her Dutch counterpart Wopke Hoekstra.

“The specialist team will assist the Ukrainian government as they gather evidence and prosecute war crimes and will include experts in conflict-related sexual violence,” said a foreign office statement.

Ukrainian rescue workers on Friday recovered a corpse from the rubble of a building in Kyiv that was hit by a missile, mayor Vitali Klitschko said.

The death was the first reported in Thursday’s missile strike as the head of the United Nations visited Kyiv. Ukrainian officials said two Russian missiles had struck the capital.

Russia confirmed on Friday that its forces had destroyed the production facilities of a space-rocket plant in Kyiv with high precision long-range missiles but did not comment directly on the civilian fatality.

The United Nations has condemned Russia’s attack on Ukraine as “shocking” after secretary general Antonio Guterres’ visit to the destruction-hit areas in and around capital Kyiv amid renewed bombardment from Moscow’s troops on Thursday.

Kris Janowski, UN spokesperson in Ukraine, said in a statement that it had been “a sad and shocking experience to visit these places, they are very damaged, and the people traumatized by what has happened to them”.

Ukrainian rescue workers on Friday recovered a corpse from the rubble of a building in Kyiv that was hit by a missile, mayor Vitali Klitschko said. The death was the first reported in Thursday’s attack in which two Russian missiles struck the capital, Ukrainian officials said.

Our reporter, Sravasti Dasgupta, has the full story below:

Russia withdrew its forces from outside Kyiv last month after failing to take the capital in the initial stages of its Feb. 24 invasion and launched a massive attack in Ukraine’s eastern Donbas region.

Moscow regards winning the “Battle for Donbas” as crucial if it is to achieve its stated aim of securing control over the Donetsk and Luhansk regions, Britain’s defence ministry said.

“Fighting has been particularly heavy around Lysychansk and Severodonetsk, with an attempted advance south from Izium towards Slovyansk,” the ministry said on Twitter.

Due to strong Ukrainian resistance, Russian territorial gains have been limited and achieved at significant cost, the ministry added in the regular bulletin. Reuters could not immediately verify the report.

Ukraine hopes on Friday to evacuate civilians who are holed up in a vast steel works with the last fighters defending the southern city of Mariupol.

“An operation is planned today to get civilians out of the plant,” President Volodymyr Zelensky’s office said without giving details.

UN secretary-general Antonio Guterres said after meeting Mr Zelensky in Kyiv on Thursday that intense discussions were under way to enable the evacuation of the Azovstal steel plant, which has been pounded by Russian forces occupying Mariupol.

On Tuesday, Russian President Vladimir Putin agreed “in principle” to UN and International Committee for the Red Cross involvement in evacuating the Azovstal plant.

The Mariupol city council has said about 100,000 residents across the city are “in mortal danger” because of Russian shelling and unsanitary conditions, and described a “catastrophic” shortage of drinking water and food.

UK non-profit organisation Presidium Network have said that two civilians working as humanitarian aid volunteers were captured by Russian forces on Monday at a checkpoint south of the city of Zaporizhzhia in south-eastern Ukraine.

They were not working for the Presidium Network, which helps to get aid into Kyiv.

Two buildings were bombarded in Kyiv – wounding at least 10 – barely an hour after Ukraine’s president held a news conference with UN secretary general, who had been touring the capital.

Ukraine hopes to evacuate civilians who are holed up with Ukrainian fighters in the vast Azovstal steel plant in the southern city of Mariupol.

“An operation is planned today to get civilians out of the plant,” President Volodymyr Zelenskiy’s office said without giving details.