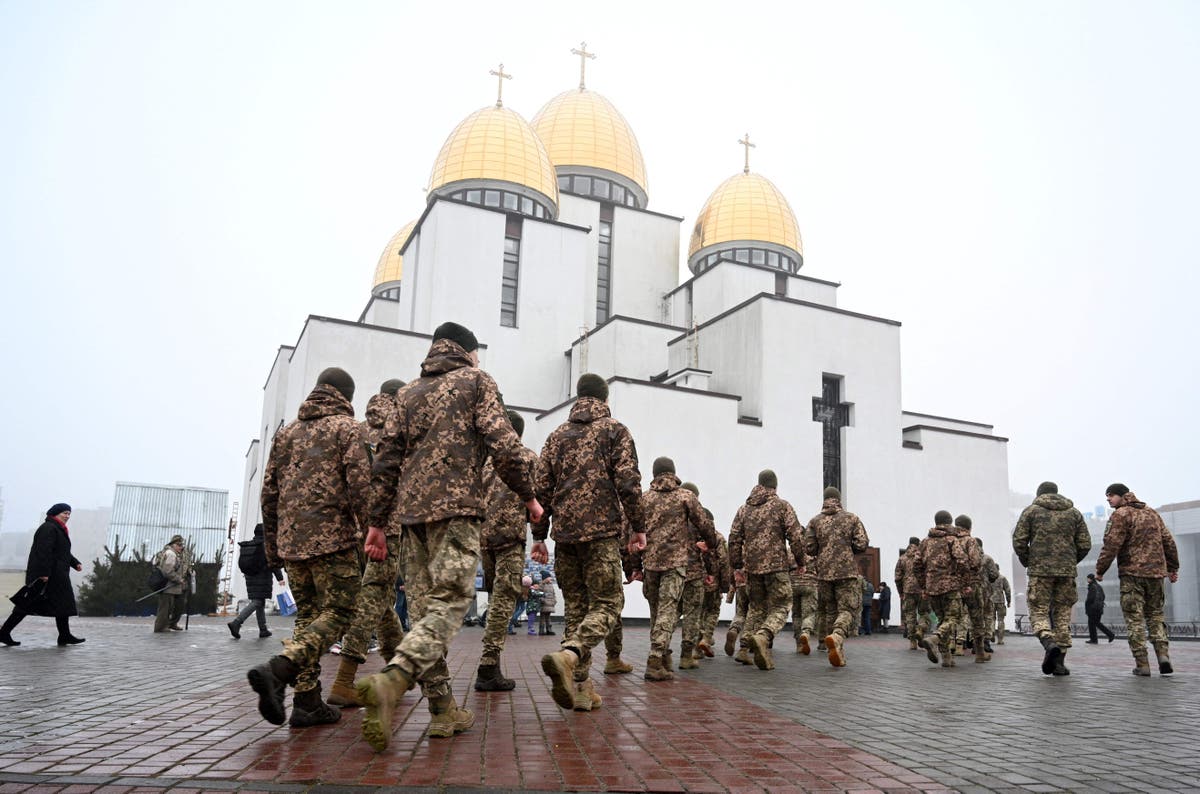 A top ally of Mr Zelensky has said that corrupt officials would be “actively” jailed, setting out a zero-tolerance approach.

Germany’s foreign minister says Berlin “would not stand in the way” of Poland sending Leopard 2 tanks to Ukraine, on the same day as Boris Johnson made a surprise visit to Kyiv.

A top ally of president Volodymyr Zelensky has said that Kyiv would “actively” jail corrupt officials, as it adopts a zero-tolerance approach to corruption amid high-profile graft allegations.

The unnamed official’s comments, reported by Reuters, come as Mr Zelensky is carrying out a sweeping personnel change amid reports that cabinet ministers and senior officials could be sacked imminently.

David Arakhamia, head of Mr Zelensky’s Servant of the People party, said it had been made clear since Russia’s invasion on 24 February 2022 that officials should “focus on the war, help victims, cut bureaucracy and stop dubious business”.

“Many of them got the message. But many of them did not unfortunately. We’re definitely going to be jailing actively this spring. If the humane approach doesn’t work, we’ll do it in line with martial law.”

“There are already personnel decisions – some today, some tomorrow – regarding officials at various levels in ministries and other central government structures, as well as in the regions and in law enforcement,” Mr Zelensky said in his nightly video address on Monday.

Mr Zelensky, who did not identify the officials to be replaced, said his plans included toughening oversight on travelling abroad for official assignments.

This comes after anti-corruption police on Sunday said they had detained the deputy infrastructure minister on suspicion of receiving a $400,000 kickback over the import of generators last September, an allegation the minister denies.

A newspaper investigation accused the defence ministry of overpaying suppliers for soldiers’ food. The supplier has said it made a technical mistake and no money had changed hands.

Turkey’s president cast serious doubt on NATO’s expansion Monday after warning Sweden not to expect support for its bid for membership into the military alliance following weekend protests in Stockholm by an anti-Islam activist and pro-Kurdish groups.

President Recep Tayyip Erdogan slammed Rasmus Paludan’s Quran-burning protest on Saturday, saying it was an insult to everyone, especially to Muslims. He was particularly incensed at Swedish authorities for allowing the demonstration to take place outside the Turkish Embassy in Stockholm under “the protection” of security forces.

“It is clear that those who allowed such vileness to take place in front of our embassy can no longer expect any charity from us regarding their NATO membership application,” Erdogan said in his first comments regarding the weekend protests, saying Sweden must have calculated the consequences of permitting Paludan’s demonstration.

The burning of Islam’s holy book angered people across the political spectrum in Turkey, just as Sweden and Finland appeared on the cusp of NATO membership after dropping their longstanding policies of military nonalignment following Russia’s war on Ukraine. Russian President Vladimir Putin now stands to benefit as the potential enlargement of the world’s most powerful military alliance appears to be stymied.

A former high-ranking FBI counterintelligence official who investigated Russian oligarchs has been indicted on charges he secretly worked for one, in violation of U.S. sanctions. The official was also charged, in a separate indictment, with taking cash from a former foreign security officer.

Charles McGonigal, the special agent in charge of the FBI’s counterintelligence division in New York from 2016 to 2018, is accused in an indictment unsealed Monday of working with a former Soviet diplomat-turned-Russian interpreter on behalf of Oleg Deripaska, a Russian billionaire they purportedly referred to in code as “the big guy” and “the client.”

McGonigal, who had supervised and participated in investigations of Russian oligarchs, including Deripaska, worked to have Deripaska’s sanctions lifted in 2019 and took money from him in 2021 to investigate a rival oligarch, the Justice Department said.

Top EU diplomat Josep Borrell has stated that Germany is not blocking the export of the German-made Leopard 2 tanks.

Berlin is facing increasing pressure to supply these tanks to Ukraine.

“It seems Germany’s not going to ban the exporting of these weapons, if some EU member states who have them want to send them”, Borrell told a news conference on Monday.

The EU has approved a €500 million support package for Ukraine, bringing the total amount of military support to $3.9 billion according to Borrell.

He also remarked that the bloc’s support to Ukraine now rests at $53 billion, including military, financial, economic and humanitarian aid.

The Latvian Prime Minister has reiterated his support for Ukraine, urging that Russia can only be stopped if the West supplies weapons.

On Monday, the EU approved €500 million of military aid for Ukraine. However, the pressure is still on for Berlin to supply German-made Leopard tanks.

“If Ukraine does not win then everyone has a huge problem because there is no indication that Russia will stop or would be interested in stopping”, Krisjanis Karins told Sky News.

“We have to help Ukraine stop Russia and that can only be done with the supplying of weapons.”

It was “quite important” that Germany was “fully on board” with other EU countries on supplying the German-made Leopard tanks, Karins added.

The EU has launched a civilian mission to monitor the border between Armenia and Azerbaijan, a region viewed by the Kremlin as Russia’s backyard.

The initiative was requested by Armenia, extending a 40-strong mission that was deployed for two months in 2022.

The new mission has a two-year mandate and is set to conduct “routine patrolling and report on the situation”, an EU statement confirmed.

Armenia and Azerbaijan fought over control of Nagorno-Karabakh in the early 1990s, a victory which Armenia won. 30,000 people were killed.

Armenia has accused Russian soldiers of failing to prevent fighting and stopping Azerbaijanis blockading the only route to Nagorno-Karabakh. Russian peacekeepers were deployed to the region in 2021 after a conflict which killed 6500 people.

Poland has stepped up pressure on Berlin over arms to Ukraine, saying it would send German-made Leopard tanks to Kyiv if other countries did the same.

But Germany, which must approve re-exports of the Leopard, has held back, wary of moves that could cause Moscow to escalate, and says other Nato nations have yet to formally seek permission to supply Kyiv.

It came as EU foreign ministers agreed to allocate another £440m worth of military aid for Ukraine, along with a further £30m for “non-lethal equipment” for military training of Ukraine, Swedish and Czech officials.

Dealing with concerns around the Northern Ireland Protocol “isn’t rocket science”, and a solution must be found, a former Irish premier has said.

Bertie Ahern said the current stalemate which has plunged the Stormont Assembly into flux is “beyond comprehension”.

He emphasised that with a bit of flexibility it can be resolved.

“I really, really believe that this isn’t rocket science,” he said.

“When you think of the things that we resolved, we got the IRA to decommit their arms, we released prisoners … we reformed the old RUC to now a very competent international PSNI.”

Closing the session, Mr Hoare said the horrors of the war in Ukraine has “contextualised” the size of the problem.

“If the sophisticated, mature statecraft of Brussels, Westminster and Dublin can’t solve this, then I think we all have to begin to wonder what the hell are we all doing,” he said.

“Role who work for our economy from abroad…should not be punished”, says billionaire metals executive Vladimir Potanin

One of Russia’s richest tycoons, billionaire metals executive Vladimir Potanin, has called on the authorities to tolerate Russian workers who have fled following the Ukraine war.

“People who work for our economy from abroad – remotely or otherwise – should not be punished”, Potanin told the online RBC news portal.

He also called for an end to punitive measures against workers who had fled, many of whom did so to avoid being drafted into the army or because they morally disagreed with the war.

It is estimated that Potanin is Russia’s richest or second-richest person, with his wealth derived from his stake in metals giant Nornickel.