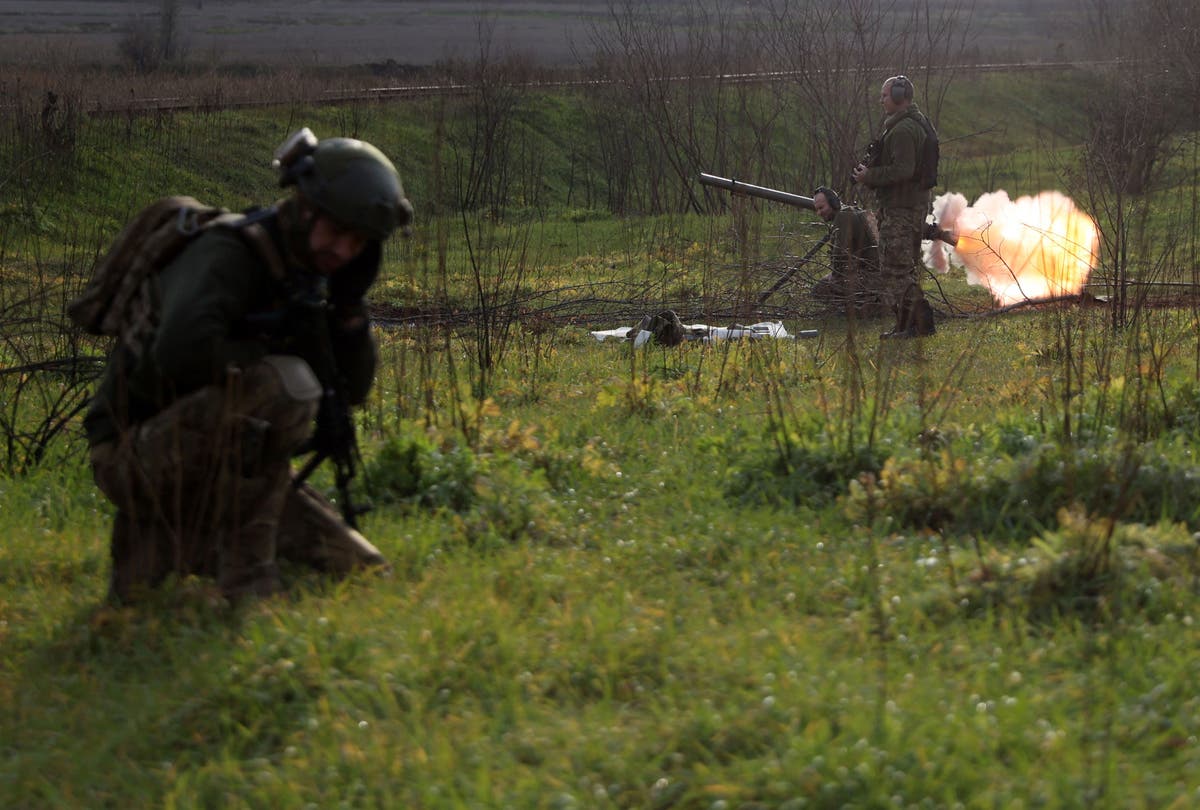 Russian soldiers dumped and burned the bodies of their countrymen in a local landfill in Kherson, residents in the area told The Guardian.

A 40-year-old resident said that the remains of fallen Russian soldiers were moved to the landfill and burned each time the Ukrainian army shelled Moscow’s troops there.

This is believed to have occurred over the summer when the Russian soldiers were struggling to keep control of the territory.

Some discarded Russian helmets were also found in the landfill after Ukraine recaptured the area last week.

It comes amid warnings that the besieged country, battered by nine months of war, will struggle to see out the coming winter.

Civilians are being evacuated from recently liberated areas of the Kherson region and neighbouring Mykolaiv, fearing that damage to the infrastructure is too severe for people to endure the colder months there.

Ukrainian state-owned grid operator Ukrenergo reported that 40 per cent of Ukrainians were experiencing difficulties with power.

The situation is particularly bad in Kyiv and nearby regions, Volodymyr Zelensky said.

Russian president Vladimir Putin will in coming days meet the mothers of soldiers amid fierce fighting in Ukraine, the Vedomosti newspaper reported, citing three unidentified sources in the presidential administration.

Russia celebrates Mother’s Day on Nov. 27. The Kremlin has not officially announced any Putin meeting with soldiers’ mothers.

President Volodymyr Zelensky urged residents of Kyiv and several other areas to limit electricity use.

Ukrainians are most likely to live with blackouts at least until the end of March, the head of a major energy provider said. As they head into a cold winter, residents of a bombed-out Ukrainian village say they appreciate a warm bath in a mural painted by graffiti artist Banksy. The mural shows a man scrubbing his back in a bathtub.

Why did Russia invade Ukraine and what could happen next?

Russia’s “special military operation” has now been raging for nine months, the conflict continuing to record devastating casualties and force the mass displacement of millions of Ukrainians.

Vladimir Putin began the war by claiming Ukraine needed to be “demilitarised and de-Nazified”, an entirely baseless pretext on which to launch a landgrab against a sovereign neighbour state that happens to have a Jewish president.

Ukraine has fought back courageously ever since and continued to defy the odds by defending itself against Russian onslaughts with the help of Western military aid.

Any demonstration of a Ukrainian capability to threaten Novorssiysk would highly likely represent a further strategic challenge for the Russian Black Sea fleet, the British defence ministry said today.

The ministry was refering to multiple reports of an attack that took place at an oil terminal in Novorssiysk port on Russia’s Black Sea coast which is close to a major base of the BSF.

“The BSF relocated many of its submarine operations to Novorssiysk after its Sevastopol base in occupied Crimea was struck by Ukraine over the summer. Russian commanders will likely be concerned about threats to the Novorssiysk-based amphibious landing ship flotilla,” the ministry said in its latest intelligence update.

It noted that these vessels are “relatively vulnerable without escorts and have assumed a more important role in supplying Russian forces in Ukraine since the Kerch Bridge was damaged in October.”

Ukraine’s deputy prime minister Iryna Vereshchuk posted a number of ways for residents in Kherson to express interest in leaving as the city, recently reclaimed by Kyiv, has been battered to the limit of habitability.

The politician shared a Telegram message for Kherson residents – especially the elderly, women with children and those who are ill or disabled.

“You can be evacuated for the winter period to safer regions of the country,” she wrote, citing both security and infrastructure problems.

Ukraine managed to narrowly escape a nuclear disaster during fighting at the weekend, the UN nuclear watchdog claimed, as it confirmed that Europe’s largest atomic power plant saw a barrage of shells, some falling near reactors and damaging a radioactive waste storage building.

On Monday, Russia and Ukraine traded blame for at least a dozen explosions at Ukraine’s Zaporizhzhia nuclear power station, which has been under Russian control since soon after it invaded but is across the Dnipro river from areas controlled by Kyiv.

Volodymyr Zelensky urged Nato members to guarantee protection from “Russian sabotage” at nuclear facilities but did not state the details of the military counterattack by his troops in the area.

Praising the resilience and contributions of ordinary citizens to the war effort, the Ukrainian leader said his country would continue to stand firm.

“We can be left without money. Without gasoline. Without hot water. Without light. But not without freedom,” Mr Zelensky said in a video address.

In a separate address to the Nato parliamentary assembly, Mr Zelensky said: “Russia has bet on a genocidal policy, and that is why it is destroying our energy infrastructure.”

“To ‘kill’ electricity, water and heat supply in winter – and this is Russia’s goal – is to put the lives of millions of people in direct danger. This is equivalent to the use of weapons of mass destruction – an absolute crime,” he said.

Another conflict preoccupies Putin even as war in Ukraine goes on

Vladimir Putin stayed away from the G20 summit in Bali to avoid the opprobrium he would have faced over his invasion of Ukraine.

But this week he is going to be in the Armenian capital, Yerevan, as another conflict threatens to spread on Russia’s borders.

While international focus has been on Ukraine, the violent confrontation between Armenia and Azerbaijan over Nagorno-Karabakh – a disputed region which has led to two wars – is threatening to erupt once again.

A brief conflict two years ago has been followed by several large-scale clashes, with hundreds reported killed. Civilians have been forced to flee their homes, and there has been widespread destruction of cultural heritage. More than 120 square kilometres of its territory, says Armenia, is now occupied.

Russia is now bombarding Kherson from across the Dnipro river after its troops made a hurried exit from the captured territory last week, Ukrainian presidential adviser Mykhailo Podolyak said yesterday evening.

“RF [Russian federation] began to systematically shell Kherson from the left bank. There is no military logic: they just want to take revenge on the locals. This is a huge war crime live. Has anyone seen the @UNHumanRights statements yet? Or the routine of Russian atrocities is no longer interesting?” he said on Twitter.

Elsewhere, fierce fighting has been concentrated in Ukraine’s east where Russian troop movements have been confirmed into the industrial Donbas region from around Kherson in the south — a strategic territorial target for Moscow in the invasion.

Russian forces had tried to make advances around Bakhmut and Avdiivka in Donetsk, and bombarded nearby towns, Ukraine’s military said late last night.

Moscow has denied intentionally targeting civilians in what Vladimir Putin has called a “special military operation”.

Activists have placed a sculpture of a Russian missile next to the Charging Bull statue on Wall Street in New York, accusing Russia of ecocide on Ukrainian land in the course of its invasion.

Photos shared by Oleksandr Todorchuk, founder of UAnimals showed the Russian missile installation partially burried in the ground immediately next to the bull and read #StopEcocideUkraine and ‘Bull fleeing the war’

The installation focusing on the war’s impact on land and environment has been placed at the landmark location in New York for a day.

“The pop-up installation aims to draw attention to the ecocide that Russia commits during the war in Ukraine. In this action, we reimagine the essence of the popular statue and show that an angry bull may be just a frightened animal fleeing war,” read an Instagram post by Mr Todorchuk.

It added: “During a full-scale invasion, Russia kills not only people, but also millions of animals. And destroys the ecosystem in general. To fight this crime uanimals launched an international campaign #StopEcocideUkraine. I remind you that due to Russian aggression millions of animals died.”

The soil is contaminated with harmful substances, and there are 8 reserves and 12 national parks under occupation, Mr Todorchuk said in the post.

Boy, 5, in critical condition after 8-year-old family friend shoots him