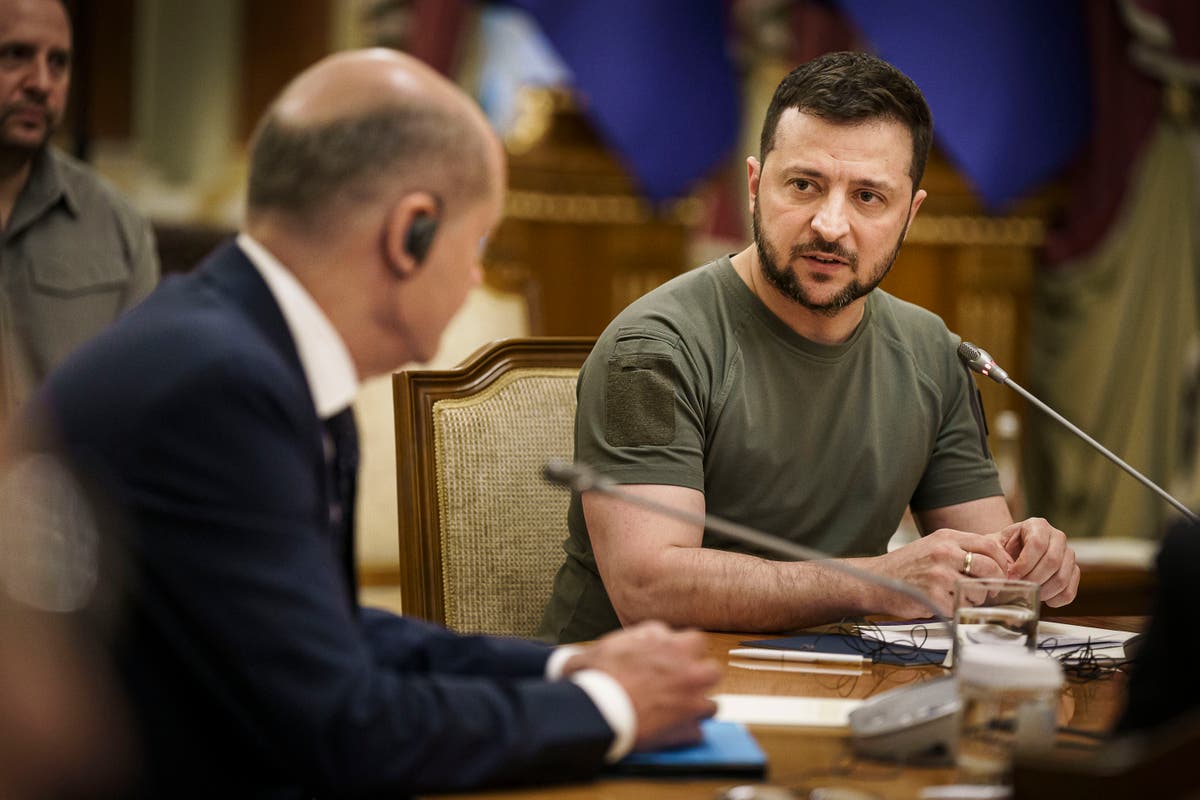 Russia could intensify its attacks on Ukraine this week as EU leaders are slated to discuss the besieged country’s attempt to enter the bloc, Volodymyr Zelensky said on Sunday, adding that “we are ready”.

“Obviously, we should expect greater hostile activity from Russia. Purposefully – demonstratively. This week exactly. And not only against Ukraine, but also against other European countries. We are preparing. We are ready. We warn partners,” Mr Zelensky said.

Mr Zelensky said that he will deliver new addresses this week, including to Europeans.

Ukraine had applied to become a member of the EU just four days after the invasion began on 24 February.

Meanwhile, the Nato secretary-general Jens Stoltenberg has said that the conflict in Ukraine “could take years” before it reaches a peaceful conclusion.

And in its latest intelligence update for Monday, the MoD claimed Russian troops are becoming exhausted as a result of poor institutional culture, and that Moscow may also be running low on stocks of advanced cruise missiles.

The British defence ministry has claimed that the Russian troops are becoming exhausted as a result of poor institutional culture and skill sets, and that the troops are possibly running low on stocks of advanced cruise missiles.

“For years, much of Russia’s air combat training has highly likely been heavily scripted and designed to impress senior officials, rather than to develop dynamic initiative amongst air crews,” the British MoD said on Monday in its latest intelligence update.

It added: “While Russia has an impressive roster of relatively modern and capable combat jets, the air force has also almost certainly failed to develop the institutional culture and skill-sets required for its personnel to meet Russia’s aspiration of delivering a more western-style modern air campaign”.

“This has led to a greater than planned weight of effort falling to ground troops, who are becoming exhausted; and on advanced cruise missiles, stocks of which are likely running low,” the ministry said.

It claimed that in the conflict to date, Russia’s air force has underperformed and “its failure to consistently deliver air power is likely one of the most important factors behind Russia’s very limited campaign success”.

Some of the underlying causes of its difficulties echo those of Russian ground forces, the ministry claimed.

On the frontlines in Ukraine, the ministry said that Russia has concentrated its ground and tactical air operations on the central Donbas sector over the weekend.

Ukrainian officials have accused Russia of making false claims over the capture of Sievierodonetsk.

“All Russian claims that they control the town are a lie. They control the main part of the town, but not the whole town,” Luhansk governor Sehiy Gaidai said.

This comes after Russia claimed that its military offensive to win Sievierodonetsk was progressing successfully.

Mr Gaidai said that the intense fighting in the region has made the evacuation of civilians impossible.

He confirmed that a Russian attack in the southern area of Toshkivka had a “degree of success”.

Nato secretary-general Jens Stoltenberg has said the alliance will not stop supporting Ukraine even in the face of a protracted conflict.

“We must prepare for the fact that it could take years [to end the war],” he said. “We must not let up in supporting Ukraine.”

The top Nato official said increased supplies of state-of-the-art weaponry to Ukraine would improve the country’s chances of freeing its eastern region, the Donbas, from Russian occupation.

A majority of the Donbas has fallen under Russian control in the last month.

On Sunday, Russian officials said that the country’s offensive to take control of the city of Sievierodonetsk — currently Moscow’s main target after it failed to capture Kyiv — was proceeding successfully.

Ukraine holding on in Sievierodonetsk despite fierce fighting, says Zelensky

Ukrainian fighters are still holding out in Sievierodonetsk, a key strategic city in the Donbas region, despite a huge Russian offensive there, Volodymyr Zelensky said on Sunday.

He added that the battle is also raging in Kharkiv.

“The occupiers are accumulating forces in the Kharkiv direction, in the Zaporizhzhia region. They struck at our fuel infrastructure again – they want to worsen the fuel situation. Of course, we will respond to this, too,” Mr Zelensky said.

“We will help ensure that Russian tanks end up in Europe, but in the form of wreckage,” the defence minister said, reported The Kyiv Independent.

The destroyed Russian military equipment will be showcased in Warsaw, Berlin, Paris, Madrid and Lisbon, the minister said.

Russian attacks to increase this week ahead of EU summit, says Zelensky

Russia will intensify its offensive against Ukraine this week with European Union leaders set to discuss the besieged country’s bid to enter the bloc, Volodymyr Zelensky said late on Sunday, adding that “we are ready”.

“Obviously, we should expect greater hostile activity from Russia. Purposefully – demonstratively. This week exactly. And not only against Ukraine, but also against other European countries. We are preparing. We are ready. We warn partners,” Mr Zelensky said.

He added that he will deliver new addresses this week, including to Europeans.

“I will take every opportunity to defend the European perspective for Ukraine, for each of us, and to gather new supporters for us,” he said in his nightly address on Sunday.

Ukraine had sought to become a member of the EU just four days after the invasion began on 24 February.

Top officials in the bloc recommended on Friday that Ukraine receive candidate status.

Ukraine’s parliament voted through two laws which will place severe restrictions on Russian books and music as Kyiv seeks to break many remaining cultural ties between the two countries.

It will also ban the commercial import of books printed in Russia, Belarus, and occupied Ukrainian territory, while also requiring special permission for the import of books in Russian from any other country.

Another law will prohibit the playing of music by post-1991 Russian citizens on media and on public transport, while also increasing quotas on Ukrainian-language speech and music content in TV and radio broadcasts.

The laws need to be signed by President Volodymyr Zelenskiy to take effect, and there is no indication that he opposes either.

Italian foreign minister accuses own party of ‘immaturity’ over Ukraine

In a statement, Di Maio said the government had to defend the values of democracy and freedom, adding that while everyone wanted peace, Russian President Vladimir Putin was pursuing war.

He also stated that 5-Star leaders were attacking him with “hatred” and causing trouble for the government with its European partners.

“(This is) an immature attitude that tends to create tensions and instability within the government,” he added.

UN crisis coordinator: School bombing a ‘stark reminder of the cruelty of this war’

Biden tells “friend” Kishida US is committed to Japan’s defence