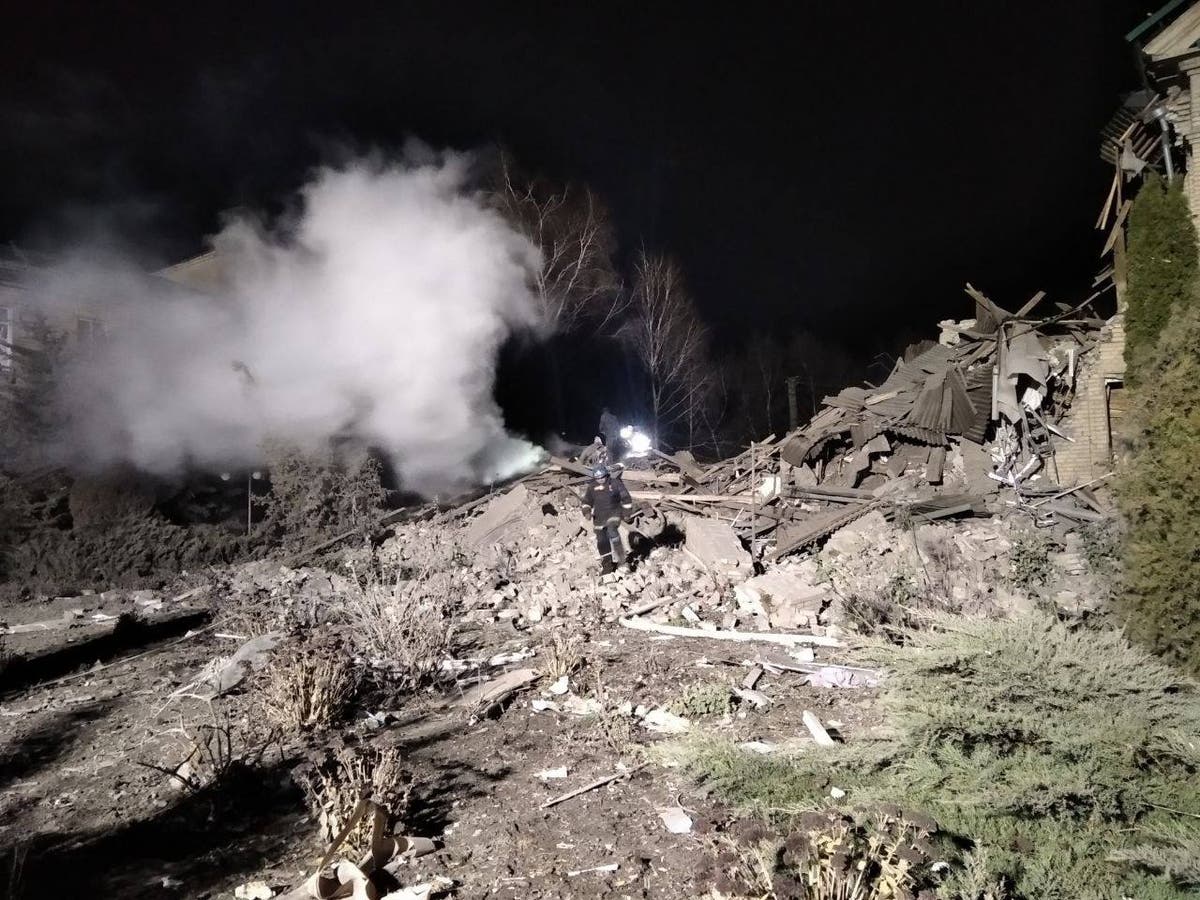 A newborn baby has been killed in a Russian missile strike on a maternity hospital in Zaporizhzhia oblast, regional governor Oleksandr Starukh said today.

The infant is the latest casualty in the Russian invasion of Ukraine which has now passed nine months and is heading into a harsh winter, with Russian forces deliberately knocking out a majority of the country’s power grid.

Much of Ukraine has been covered in snow over the past week as Volodymyr Zelensky warned that the country does not have enough power supply to meet the existing demand.

This comes at a time Russia has been accused of using gas as a political tool after threatening to further cut supplies to Europe, claiming that Kyiv was holding up deliveries to Moldova on Moscow’s last running pipeline via Ukraine.

Meanwhile, Ukraine’s forces took aim at the Kinburn Spit, Vladimir Putin’s only remaining outpost in Mykolaiv, which acts as a gateway to the Black Sea and Russian-held parts of Kherson.

Ukraine will now set up special “invincibility centres” around the country to provide locals with electricity, heat, water, internet, mobile phone connections and a pharmacy, free of charge and around the clock.

“If massive Russian strikes take place again and if there is an understanding that the electricity supply cannot be restored within hours, the work of ‘Points of Invincibility’ will be activated – all basic services will be there, including electricity, mobile communications and the Internet, heat, water, and a first-aid kit. Absolutely free and 24/7,” Mr Zelensky said.

“Points will necessarily work at all regional and district administrations, as well as at schools, buildings of the state emergency service, etc,” the Ukrainian president said as he faces the task of helping more than 10 million endure the biting winter amid continuous attacks from Russian forces.

He added that a special website called nezlamnist.gov.ua that will provide a map of such points throughout the country is already available. The website will be constantly updated, he said.

This comes as officials in Kyiv vowed to create shelters to provide heat and water and encouraged citizens to conserve energy.

Calling the damage to Ukraine’s power grid colossal, the country’s national power grid operator confirmed that outages will last for long periods for up to 10 million consumers at a time.

Ukrainian authorities have warned of “colossal” damage to the nation’s energy infrastructure and said that millions of Ukrainians could face power cuts until at least the end of March as a result of Russian attacks.

State energy firm Ukrenergo’s chief Volodymyr Kudrytskyi said that practically no thermal or hydroelectric stations had been left unscathed – though he dismissed the need to evacuate civilians from cities hit particularly badly by shortages.

“We cannot generate as much energy as consumers can use,” he told a briefing, adding that the planned shutdowns were being implemented to prevent the risk of the power system “collapsing”.

In his nightly video address, president Volodymyr Zelensky also appealed for residents to be “mindful” in their consumption of energy.

“The systematic damage to our energy system from strikes by the Russian terrorists is so considerable that all our people and businesses should be mindful and redistribute their consumption throughout the day,” he said.

A newborn has been killed in Russian strikes on a maternity ward in Ukraine’s Zaporizhzhia, regional governor Oleksandr Starukh said today.

Zaporizhzhia region has been hotly engaged in fierce fighting between Russian and Ukrainian troops, witnessing shelling which threatens a nuclear disaster, from the early days of Moscow’s invasion in February.

Earlier this week, authorities warned that attacks on Zaporizhzhia, which houses Europe’s largest nuclear power plant, is akin to “playing with fire”.

In a key battlefield development, a Ukrainian official acknowledged that Kyiv’s forces are attacking Russian positions on the Kinburn Spit, which is a gateway to the Black Sea basin and parts of the southern Kherson region that are still under Russian control.

Despite an information blackout around the operation, Natalya Humenyuk, a spokesperson for the Ukrainian army’s Operational Command South, said in televised remarks that Ukrainian forces are “continuing a military operation” in the area.

Moscow has used the Kinburn Spit as a staging ground for missile and artillery strikes on Ukrainian positions in the Mykolaiv province, and elsewhere along the Ukrainian-controlled Black Sea coast.

Ukraine recently recaptured the city of Kherson, on the western bank of the Dnieper River, and surrounding areas in a major battlefield advance.

Capturing the Kinburn Spit could help Ukrainian forces push into territory Russia still holds in the Kherson region “under significantly less Russian artillery fire” than an attempt at a direct crossing of the Dnieper would likely unleash, a Washington-based think tank said late Monday.

The Institute for the Study of War added that control of the area would help Kyiv alleviate Russian strikes on Ukraine‘s southern seaports and allow Ukraine to increase its naval activity in the Black Sea.

Vladimir Putin will meet the mothers of Russian soldiers fighting in Ukraine in time for the country’s celebration of Mother’s Day this weekend (Maryam Zakir-Hussain writes).

Russia has faced monumental setbacks in their invasion of Ukraine following the humiliating withdrawal of troops from the strategic southern region of Kherson earlier this month.

The Kremlin confirmed the meeting that was first reported by the Vedomosti newspaper. Mother’s Day takes place on 27 November in Russia.

“Indeed, such a meeting is planned, we can confirm,” a spokesperson for the Kremlin told reporters.

Poland’s president has been duped into speaking to a hoax caller pretending to be France’s Emmanuel Macron on the night that a missile hit a village near the Ukrainian border, his office said on Tuesday, an admission likely to raise questions about its operations.

In a recording, posted on the internet by Russian comedians Vovan and Lexus, Polish President Andrzej Duda can be heard speaking in English to the caller, who attempts to put on a French accent.

At the time of the incident, there were claims Russian missiles had landed in Poland and fears that Nato could be dragged directly into the war. It was later said the missiles were fired from a Ukrainian air defence system.

The call, the second time in recent years that the pranksters from Russia have succeeded in getting through to Duda, came on an evening when the world feared that the conflict in Ukraine could spill beyond its borders.

Milan’s famous La Scala opera house has defended its decision to open its new season next month with “Boris Godunov” despite criticism from Ukrainians about staging a Russian work.

Earlier this month the Ukrainian consul in Milan Andrii Kartysh wrote to the head of the theatre and local political leaders to protest over plans to stage the opera written by Russian composer Modest Mussorgsky in the 19th century.

“We took that decision three years ago, it was impossible to cancel it and indeed why should we cancel it?” La Scala artistic director, Dominque Meyer, told a news conference.

“We do not do propaganda in favour of Putin and there is nothing against Ukraine,” he added.

Russian bass and soprano Ildar Abdrazakov and Anna Denisova are cast in the main roles for the production. The opening of a new season at La Scala is one of the highlights of Italy’s cultural calendar.

“Mussorgsky with this opera has challenged power – that’s one reason why it is right to stage it”, said director Kasper Holten depicting Boris Godunov as a story about power and cynicism.

Ukrainians left with a lack of basic services due to Russian attacks on power stations and other facilities this winter can turn to special “invincibility centres,” President Volodymyr Zelensky said.

Thousands of centres spread across the country will offer electricity, heat, water, internet service, mobile phone connections and a pharmacy, free of charge and around the clock.

Russian attacks have knocked out power for long periods to up to 10 million consumers at a time, forcing cities across the country into rolling blackouts to conserve depleted energy stocks.

“If massive Russian strikes happen again and it’s clear power will not be restored for hours, the ‘invincibility centres’ will go into action with all key services,” Mr Zelensky said in a nightly video address.

He said more than 4,000 centres had already been set up, with more being planned.

A new Office for National Statistics survey suggests that Ukrainians who have come to the UK are having trouble renting because they do not have a guarantor or references, Flora Thompson reports.

Some have moved addresses since arriving in the country as a result of “relationship difficulties” with their sponsor, the findings also indicate.

Meanwhile, there has been a “significant” increase in the number of people who are now working in Britain after fleeing war in their homeland, albeit in different roles than they held before.

Ukrainian authorities have begun evacuating civilians from recently liberated sections of the Kherson and Mykolaiv regions, fearing a lack of heat, power and water due to Russian shelling will make living conditions too difficult this winter, my colleague Oliver Browning reports.

The World Health Organisation (WHO) says millions in Ukraine face “life-threatening” conditions over the coming months, with residents of the southern regions urged to move to safer areas in central and western parts of the country.

Meanwhile, citizens living abroad have been asked not to return to the country in an effort to conserve power.

Russia’s Shivulech volcano could burst into ‘powerful eruption’ any time

COP27: A chaotic summit that teetered on the brink of disaster – but there was a genuine breakthrough