The travel chaos hitting passengers in the UK is set to widen this summer, after British Airways staff voted to strike during the school holidays and talks to avoid more industrial action on the railway broke up without a deal.

Around 700 BA check-in crew at London’s Heathrow airport have agreed to strike in a dispute over pay, with unions promising “severe disruption” timed to coincide with the summer rush to fly abroad.

The results of the ballots were announced as Britain’s railways were hit by strikes for the second time in three days, with further industrial action planned for Saturday.

The prospect of disruption at the UK’s busiest airport will reignite fears that the country is set for a summer of discontent, evoking memories of the delays and cancellations that hit airports this month.

BA expects the strikes to impact roughly half its check-in staff at Heathrow, after both the GMB and Unite unions said 95 per cent of their members had voted to back industrial action.

GMB said strike dates would be confirmed in the coming days, and were “likely to be during the peak summer holiday period”. Unite, which represents around 500 check-in staff at Heathrow, said it had given BA a “short window” to come back with an improved offer before it set strike dates. It would need to give two weeks’ notice before any action took place.

The union is demanding that pay be reinstated to its pre-pandemic level, following a 10 per cent cut imposed by BA when the industry was all but shut down by Covid-19 travel restrictions. Management had already had its pay restored in full, Unite said.

The airline, which lost £4bn over the past two years, has instead offered a one-off award of 10 per cent of salary, rather than a full pay rise. This was accepted by other parts of the business, including crew and ground staff.

The union reached a settlement this month on a 10 per cent pay increase for 200 workers employed by British Airways Gatwick Ground Handlers.

BA said it was “extremely disappointed” but “committed to work together” with staff to find a solution, while the Business Travel Association said the strikes were “toying with the livelihoods of businesspeople”.

The airline has already been forced to cut 10 per cent of its flight schedules this summer because of staff shortages, and the planned strikes represent a major test for chief executive Sean Doyle, who has made repairing relations with staff a priority.

His predecessor Alex Cruz’s tenure was marred by a damaging pilot’s strike and fractious relations with unions during the pandemic as the airline shed around 10,000 workers.

“British Airways won’t want a strike on their hands during a peak summer period,” he added.

Other airlines including easyJet and Ryanair are also facing industrial action in some parts of continental Europe. 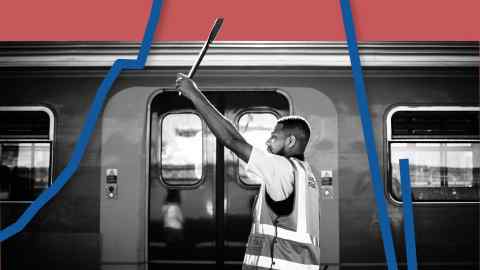 Ministers meanwhile remained “hopeful” that a pay deal could be struck with railway unions to avoid more strikes, government officials said, but the two sides failed to reach a deal on Thursday.

One senior government official close to the negotiations said the union’s private position was markedly different from its executive’s public rhetoric.

“The RMT are being far more reasonable in the private talks than the bellicose language in public,” he said. “We’re still hopeful we can do a deal.”

Another senior official said the fact the RMT had not announced more strike dates this summer “suggested there is still space to do a deal”.

There were some signs of thawing relations on Thursday. The two sides met for talks, a day after the RMT refused to negotiate unless a threat to cut jobs was taken off the table.

The two sets of maintenance representatives met on Thursday to discuss the “nitty-gritty” of changes, which was a “slightly positive sign”, one railway executive said.

“RMT will continue its industrial campaign until a settlement is reached,” the union’s general secretary Mick Lynch said.

Ministers on Thursday also outlined new legislation to make it easier for businesses to use “skilled, temporary” agency staff to reduce disruption caused by industrial action, a move criticised by Labour and the Trades Union Congress.

Stagflationary risk to India quite low compared to other countries: CEA