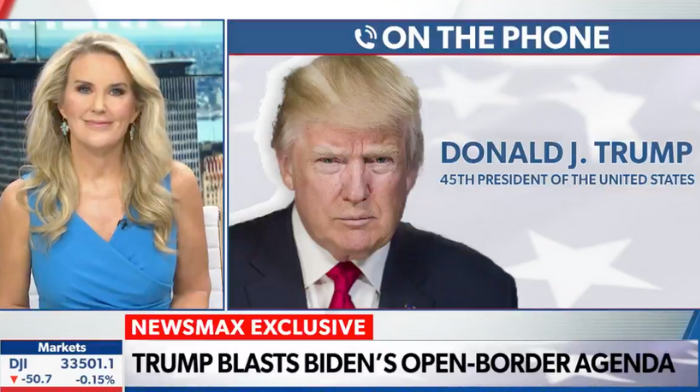 Trump made his comments during a phone call into Newsmax TV.

The 45th President has made a number of appearances and statements in recent weeks, after being relatively quiet immediately after the 2020 election.

The former president said MLB should be punished for moving its All-Star Game from Atlanta to Boulder, Colorado in protest over Georgia’s recent election reform bill.

Trump even said the recently passed bill was “watered down” if anything, and also noted that Boulder was “much less diverse” than the original location of the game, Atlanta.

“I would say boycott baseball, why not,” Trump told Newsmax TV’s Heather Childers. Trump added that “woke is not good for our country.”

Trump told Newsmax TV, “Now they’ve moved the All-Star Game because they thought the bill was too tough when it’s not.”

Trump continued, “I think a lot of people are giving up on baseball anyway… they shouldn’t be hurting the people of Georgia.”

“Let ‘em try boycotting Texas,” Trump said. “Texas will teach ‘em a lesson. Let ‘em try it. Frankly, these companies should stay out of it, because all they do is aggravate people.”

Trump said not enough conservative leaders were standing up to the corporations for opposing the Georgia law.

“If Republican conservatives… if they would boycott these companies that were so above it all, you’d find that they would come back in the fold very quickly,” Trump said.

“I’m just not very interested in baseball for the last number of years … You want to find a game, it’s on every channel and yet you can’t find anything. It’s the weirdest thing … I would say boycott baseball. Why not?”pic.twitter.com/YXD74UXhhn

He also blasted these organizations for merely parroting liberal talking points about the voting law. Republicans contend that the new law actually increases voters, while opponents of the law insist that the bill amounts to voter suppression.

“As soon as Stacey Abrams speaks out they end up folding,” Trump said of the companies and the Democratic activist.

“We have more people than they do,” he finished.

It remains to be seen if Trump supporters, conservatives, or Texans in general would follow Trump’s lead on boycotting baseball.

On Monday, the Texas Rangers had their home opener for the baseball season, with a full stadium.

Biden will offer a virus update as the pace of vaccination accelerates.

The Matt Gaetz Investigation: What We Know