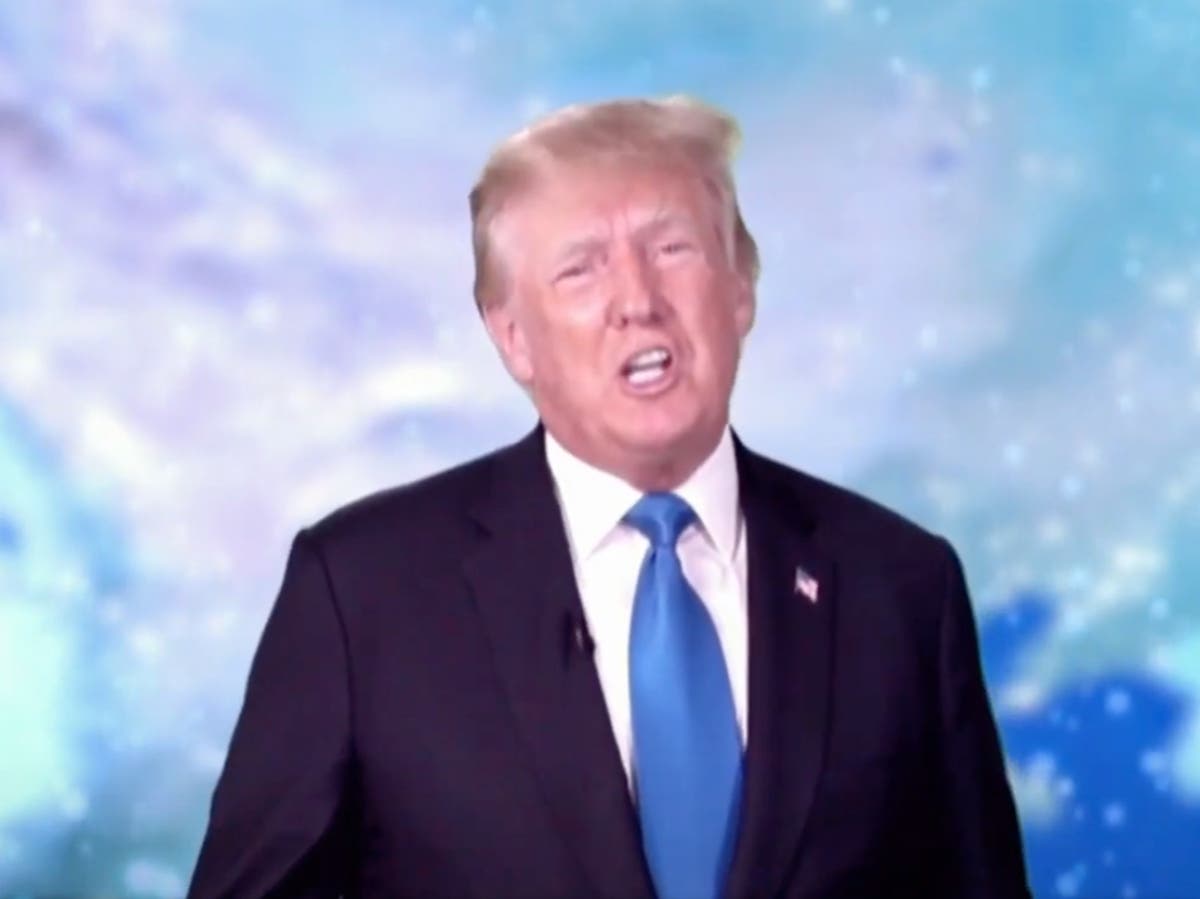 Former president Donald Trump has appeared in a virtual address for an organisation linked to a controversial religious movement that aired on the 20th anniversary of the 9/11 terrorist attacks.

In the video, Mr Trump appears to float against a virtual backdrop of clouds as he praises the founders of the Unification Church, a movement that has long courted Republican officials as part of an apparent propaganda campaign, and been dubbed a cult.

The event was organised by Hak Ja Han Moon, widow of Unification Church founder Sun Myung Moon, who claimed to be the messiah. Within the movement, the Moons are considered the “true father” and “truth mother” to humankind.

Followers are part of a sprawling business and political enterprise to promote its goals, which include the unification of North and South Korea into a single Christian state.

Mr Trump appeared at the “Rally of Hope Think Tank” event sponsored by the Universal Peace Federation, a group co-founded by the Moons in 2005 and aligned with the Unification movement.

In his remarks, the former president praised the movement and the late Moon.

“What they have achieved on the peninsula is just amazing,” Mr Trump said of the movement. “In just a few decades, the inspiration that they have caused for the entire planet is unbelievable, and I congratulate you again and again. … Their example reminds all of us who strive for peace and a better future, that we should never give up and never, ever lose hope.”

In his remarks, he also appeared to take credit for peace on the Korean peninsula.

“Looking back today, it’s easy to forget how dangerous the situation was when I was elected,” he said. “Missiles were flying, nuclear weapons were being tested, and powerful threats were being issued every single day … Under my leadership, the United States adopted a policy of unprecedented strength.”

He also praised the Moons for creating the conservative news outlet The Washington Times, which Mr Trump called “an organization for which I have tremendous respect and admiration”.

The event, which coincided with the 20th anniversary of the 9/11 terror attacks, aimed to “promote and facilitate peace, dialogue, mediation, and the strengthening of the ecosystem of peace in the Asia Pacific region,” according to organisers.

In her address, Ms Moon claimed that “a new culture of the Pacific Rim civilization will expand throughout Asia and around the world” following unification, which cannot be a “secular nation that can only focus on human interests.”

“It must become a nation that attends God as the heavenly parent,” she said. “Not just political leaders.”

The Unification Church – which began in South Korea in 1954 before moving to the US in 1971 – is known for its mass wedding ceremonies and ties to right-wing groups.

Steve Hassan, a former member of the movement and author of The Cult of Trump, said the former president’s appearance is “pretty outrageous, even for Trump”.

The movement’s history and affiliations “are well documented,” he said. “There is no ambiguity here.”

Critic Jim Stewartson of the The Thinkin Project warned that the group’s apparent staging of a global peace event is “hard to overstate how deeply harmful and deceptive this is”.

“This is being pitched by a who’s who of establishment extremists as some sort of peace mission to unify Korea,” he said. “In reality it’s dangerous propaganda whitewashing a dangerous cult.”

Mr Trump is not the only GOP figure with ties to the movement.

In May, Mr Pence claimed that Think Tank 2022 is “bringing the wisdom of leaders in government, business, religion, civil society, ” according to Mother Jones.

In the past Hyung Jin “Sean” Moon, the son of the Moons, campaigned for Mr Trump and attended the US Capitol insurrection on 6 January.

The Independent has requested comment from the organisation, including whether Mr Trump was compensated and the timing of when he filmed his remarks.

The Independent has requested comment from Mr Trump’s spokesperson.

Mr Trump did not appear at any formal 9/11 memorial services on Saturday.

He visited a New York Police Department precinct near his Manhattan building, Trump Tower, where he took photos with officers and hinted at a run for the White House in 2024.

He later attended an Evangelical Christian concert in Washington DC. The two-day “Let Us Worship” concert is part of an ongoing protest of Covid health guidelines.

On Saturday night, the former president gave ringside commentary at a boxing event in Florida.

This article was amended on 13 October 2021 to clarify that the event was organised by the Universal Peace Federation, an organisation separate from, but with links to, the Unification Church. It previously incorrectly stated that it was a Unification Church event and that Mr Trump praised the church, whereas in fact he praised the church’s founders, who also founded the federation.

Libya: Haftar stands down from military role before polls