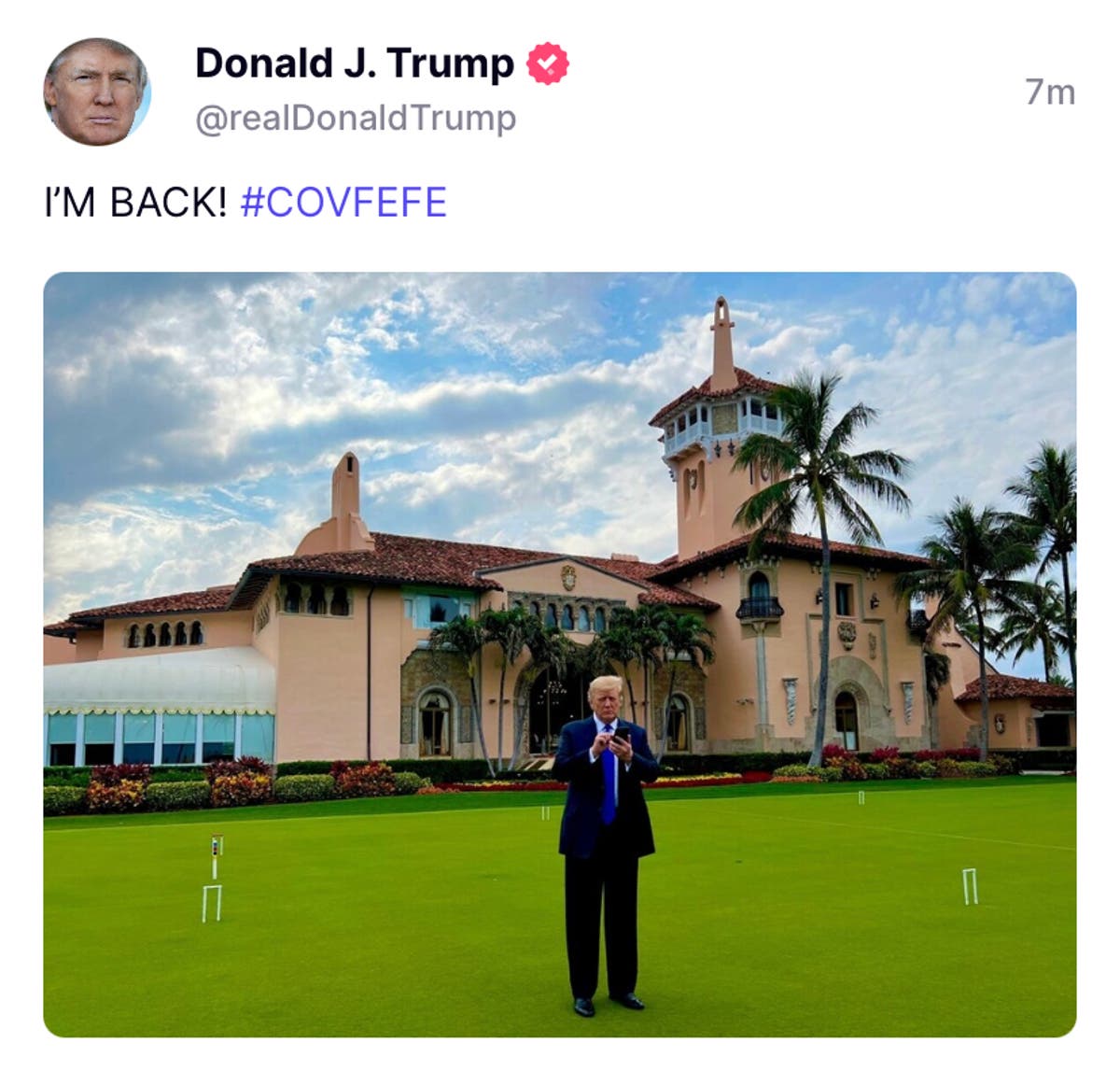 The silence was never going to last.

Donald Trump has finally posted on his Truth Social app, the struggling Twitter rival he launched earlier this year, after an uncharacteristic monthslong quiet from the usually voluable former president.

“I’M BACK! #COVFEFE,” read the post, which included a photo of Mr Trump on the phone at his Mar-a-Lago club in Florida.

The hashtag is a reference to what can only be called an iconic typo from the former president. In 2017, he tweeted the accidental koan, “Despite the negative press covfefe,” and nothing more, setting off speculation as to what he could’ve possibly meant.

Despite the then-Press Secretary insisting at the time that “the president and a small group of people know exactly what he meant,” the world may never know the true meaning of covfefe. The new post, however, has other significance.

Until today, the former president hadn’t posted anything on Truth Social since its launch in February beside a generic coming soon message.

Truth Social, which has billed itself as a safe haven for conservatives with less content moderation than the big social networks, has struggled during its launch with a long waitlist, tech bugs, and a roller coaster ride up and down the app store charts on Apple—not to mention the strange silence from its biggest star.

Elon Musk further stirred the social media covfefe pot with his controversial plan to take Twitter private with a $44 bln deal that would involve content tweaks he promised would be “upsetting the far right and the far left equally.”

Some speculated that could mean a return to network for Mr Trump, who was booted from the Twitter nest following the January 2021 riots at the US Capitol.

The former president said this week he had no plans to return to Twitter, no matter who its owner was.

“I am not going on Twitter, I am going to stay on TRUTH. I hope Elon buys Twitter because he’ll make improvements to it and he is a good man, but I am going to be staying on TRUTH,” he told Fox News.

Mr Musk, for his part, seemed somewhat sympathetic to the social media exile of the former president, but also couldn’t help but mock his rival on Wednesday.

“Should be called Trumpet instead!”

Truth Social faces other threats beyond the whims of Donald Trump.

Last year, the company announced plans to be taken public by a so-called special purpose acquisition company, or SPAC, at aN $1.7m implied valuation, but the deal has paused its filing of various important regulatory forms, and has come under investigation by the Securities and Exchange Commission.

Meanwhile, Rumble, a right-wing alternative to YouTube, is on track to finish its own SPAC process by this summer, potentially overtaking Truth Social’s influence on the space.

Amazon union leader hits back at Lindsey Graham in Senate hearing: ‘You should listen’