St Helens aim to win the Women’s Super League title for the first time when they take on 2019 champions Leeds in the Grand Final at Headingley; watch Sunday’s clash live on Sky Sports Arena from 2.30pm (kick-off 3pm)

Jodie Cunningham has afforded herself little time to celebrate being named Woman of Steel for 2021 – at least not until St Helens have played Leeds Rhinos in this Sunday’s Women’s Super League Grand Final.

Saints have already claimed the Challenge Cup and League Leaders’ Shield, followed by booking their place in the Grand Final with a 58-0 win over Castleford Tigers at Totally Wicked Stadium two weeks ago.

Clinching the title at Emerald Headingley would be the ideal way to round off what has been a successful season both on a team and personal level, and while Cunningham is delighted to be honoured on an individual level it would mean even more for her team to be crowned champions.

“It means a lot [to be named Woman of Steel],” Cunningham told Sky Sports. “I wouldn’t say I was a flashy player; I just want to work hard for the team and try to be consistent so for that to be recognised is brilliant.

“I can’t celebrate too much yet as we’re all focusing on the Grand Final, but it’s definitely really nice to be acknowledged for the efforts this season.

“It would be a dream come true, especially doing the treble. We’ve not brought any silverware to Saints in previous seasons and we definitely set out as a target to bring some back to St Helens.”

Leeds, who were beaten by Saints on route to their Challenge Cup success, come into the match as the defending champions following their victory in the 2019 Grand Final – last year’s Women’s Super League having been cancelled because of the Covid-19 pandemic. 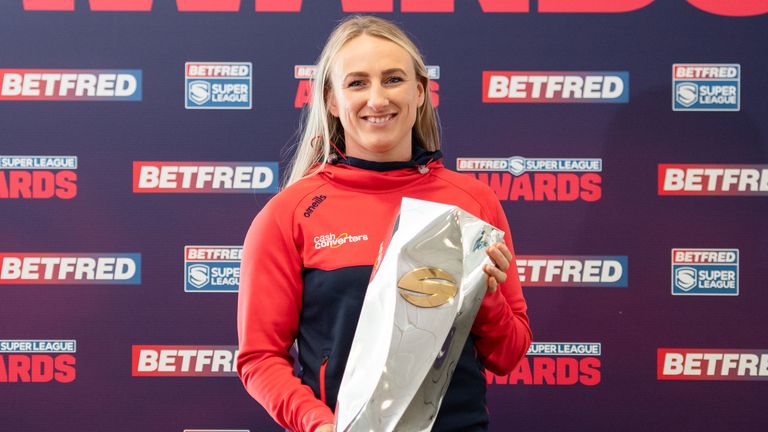 I can’t celebrate too much yet as we’re all focusing on the Grand Final, but it’s definitely really nice to be acknowledged for the efforts this season.

It has been a year of change for the Rhinos, with former player Lois Forsell now head coach and the team bringing up several players from an academy set-up which, like the men’s team has done for so many years, is starting to prove a great finishing school for talented girls in the Leeds area.

One of the players from the successful 2019 team who has come through that set-up is full-back Caitlin Beevers and the 19-year-old England international is determined to ensure Leeds do not let their crown slip after battling past York City Knights 22-18 in the semi-finals.

“It’s a big achievement and we don’t want to lose it just like that in a simple 80 minutes,” Beevers told Sky Sports.

“We’ve been working hard and making sure it’s not just those 80 minutes that you’re kept accountable for, it’s the lead-in sessions, so we’re very excited for it.

All the action from the Women’s Super League semi-final double-header at Totally Wicked Stadium as the top four faced off.

“Our main aim is to start well. Against York, I think the occasion got to some girls and we’ve done that now, so it can’t be a reason or a fault.

“I think we’re really going to step up and that’s got to be the main aim – start well and be relentless. That’s one of our key words, relentless, and it’s going to be a massive part of the game this weekend.”

Although the match is being played at Headingley, the Rhinos will be nominally the ‘away’ team due to finishing below St Helens in the league table this season.

Cunningham believes Saints have set their stall out from the opening game of the year back in April when they racked up an 86-0 win over Bradford Bulls, but the England star is in no doubt there is still more to come from the team as they aim to finish the job on Sunday. I think we’re really going to step up and that’s got to be the main aim – start well and be relentless.

“That first game we gelled so brilliantly, and we built on that throughout the season,” Cunningham said.

“I think it just proves all the hard work we put in during the off-season and that’s all come into play on the pitch.

“We just want to make sure this Grand Final performance is the best one yet, we’ve still got improvements to make and if we can put everything together on Sunday hopefully it will be a St Helens victory.”

Bournemouth slip up in chance to hit Championship summit