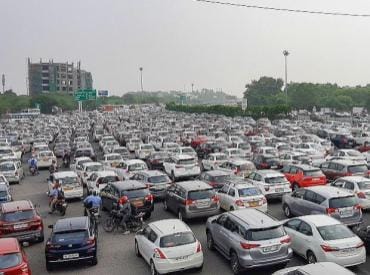 Parts of Delhi witnessed massive traffic jams on Monday as the traffic police closed off several roads in view of a call for Bharat Bandh, and the Congress’ protest against the Centre’s Agnipath scheme and “vendetta politics” against Rahul Gandhi.

Long queues of slow-moving vehicles were seen in these areas.

While one commuter said he had been stuck in traffic for almost 30 minutes and was running late for office, another asked people to avoid the Anand Vihar-Sarai Kale Khan stretch.

The Delhi Traffic Police, however, said their teams have been deployed at various spots to ensure smooth flow of traffic.

Protests against the Centre’s Agnipath scheme for defence recruitment have been going on in several parts of the country. Reportedly, some groups have given a call for a Bharat Bandh in some states to protest the scheme.

The Congress had announced on Sunday that lakhs of party workers will continue peaceful protests on Monday against the “anti-youth” Agnipath scheme and Rahul Gandhi’s questioning by the Enforcement Directorate (ED) in the National Herald money laundering case.

The Agnipath scheme, announced on June 14, provides for the recruitment of youths in the age bracket of 17-and-half to 21 years in the armed forces for only four years with a provision to retain 25 per cent of them for 15 more years. Later, the government extended the upper age limit to 23 years for recruitment in 2022.

In a series of tweets, the traffic police informed commuters about road closures.

The ED probe against Gandhi, who appeared before the agency for the fourth time on Monday, pertains to alleged financial irregularities in the Congress-promoted Young Indian Private Limited, which owns the National Herald newspaper.

The newspaper is published by the Associated Journals Limited (AJL) and owned by Young Indian Private Limited.