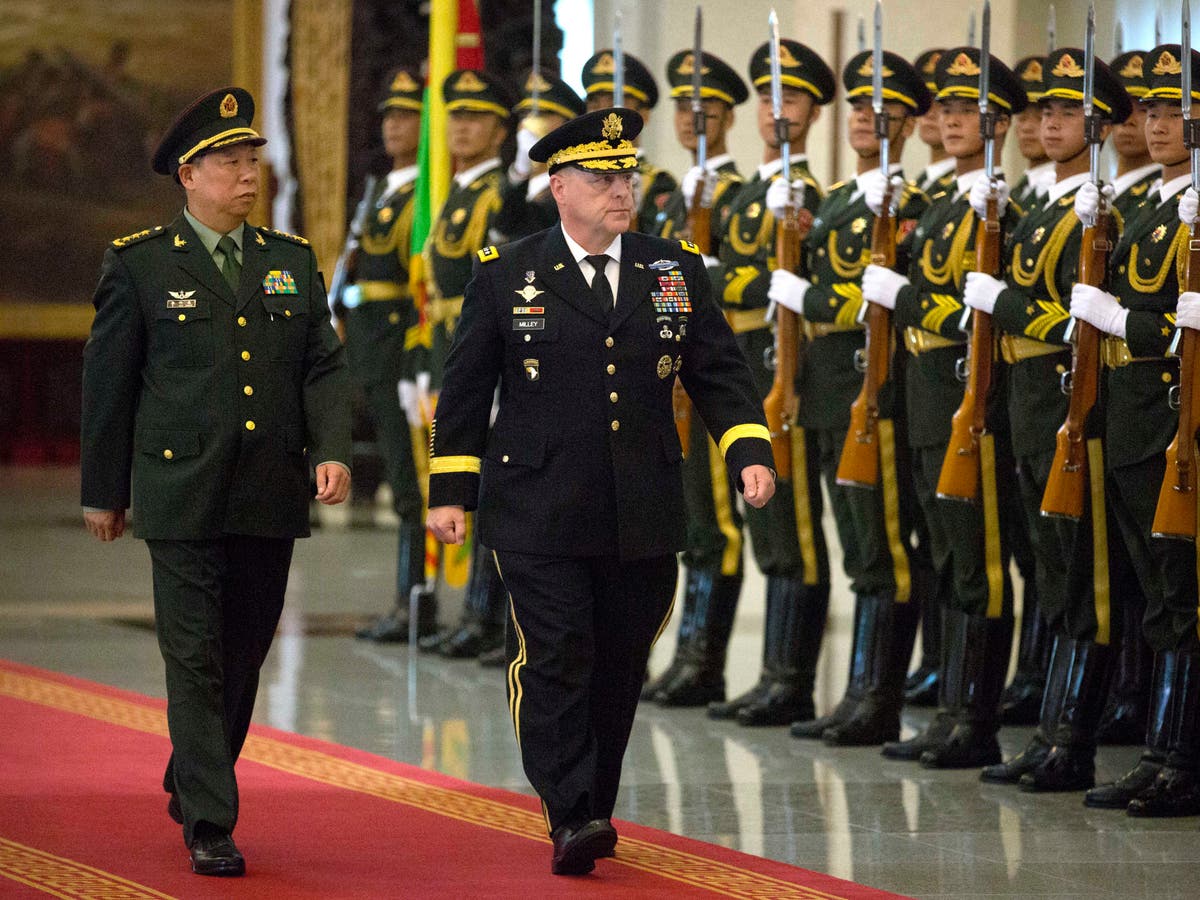 During the final months of the Trump presidency, the Chairman of the Joint Chiefs of Staff, General Mark Milley, was reportedly so worried that the then-president might start a war with China that he twice felt the need to head off the possibility of armed conflict by placing a call to his Chinese counterpart.

In two alleged secret phone calls, Gen Milley spoke to Gen Li Zuocheng of the People’s Liberation Army, telling the Chinese general that the US wouldn’t launch an attack on the country, according to Peril, a new book by Watergate journalist Bob Woodward, and his Washington Post colleague Bob Costa.

According to the book, the first call occurred on 30 October 2020, four days before the presidential election, with the other taking place on 8 January 2021, two days after the Capitol riot when Trump supporters tried to overturn President Joe Biden’s victory.

The first call was said to be initiated after Gen Milley consumed intelligence that the Chinese thought that the US was preparing for an attack, a belief prompted by tensions caused by military exercises in the South China Sea, and boosted by Mr Trump’s aggressive rhetoric towards the country.

“General Li, I want to assure you that the American government is stable and everything is going to be okay,” Gen Milley reportedly said. “We are not going to attack or conduct any kinetic operations against you.”

According to Peril, Gen Milley said he would warn Gen Li if an attack was launched, citing the history of their relationship. “General Li, you and I have known each other for now five years. If we’re going to attack, I’m going to call you ahead of time. It’s not going to be a surprise,” he said.

The authors write that Gen Li took Gen Milley at his word, according to The Washington Post.

On 8 January, the two men reportedly spoke again as Gen Milley tried to calm Chinese worries about the insurrection on 6 January, even as the events had deeply shaken Gen Milley himself.

Gen Li wasn’t entirely convinced even as Gen Milley said: “We are 100 per cent steady. Everything’s fine. But democracy can be sloppy sometimes.”

It is said that Gen Milley didn’t tell Mr Trump about the conversation. The chairman thought that China could attack if they felt threatened by an unstable Mr Trump, whom the chairman thought had suffered a mental decline following the election, and so he took action to prevent any military conflict.

On that same day, Gen Milley reportedly called the admiral in charge of the US Indo-Pacific Command, responsible for Asia and the Pacific region, and advised that the military exercises be postponed, a view the admiral accepted.

The book claims that Gen Milley also called upon other military leaders, telling them that while Mr Trump could order the launch of nuclear weapons, he, Gen Milley, had to be involved in the procedure.

Mr Woodward and Mr Costa write that Gen Milley was aware that he was “pulling a Schlesinger” – the defence secretary at the time President Richard Nixon was facing down the prospect of being impeached in August of 1974 for the Watergate scandal. James Schlesinger told military officials to check with him and the Chairman of the Joint Chiefs before carrying out any orders from Mr Nixon.

Brian Laundrie: Authorities in Florida find no trace of missing man after sighting on deer cam

Who is Hunter Brittain, the 17-year-old killed by Arkansas police?