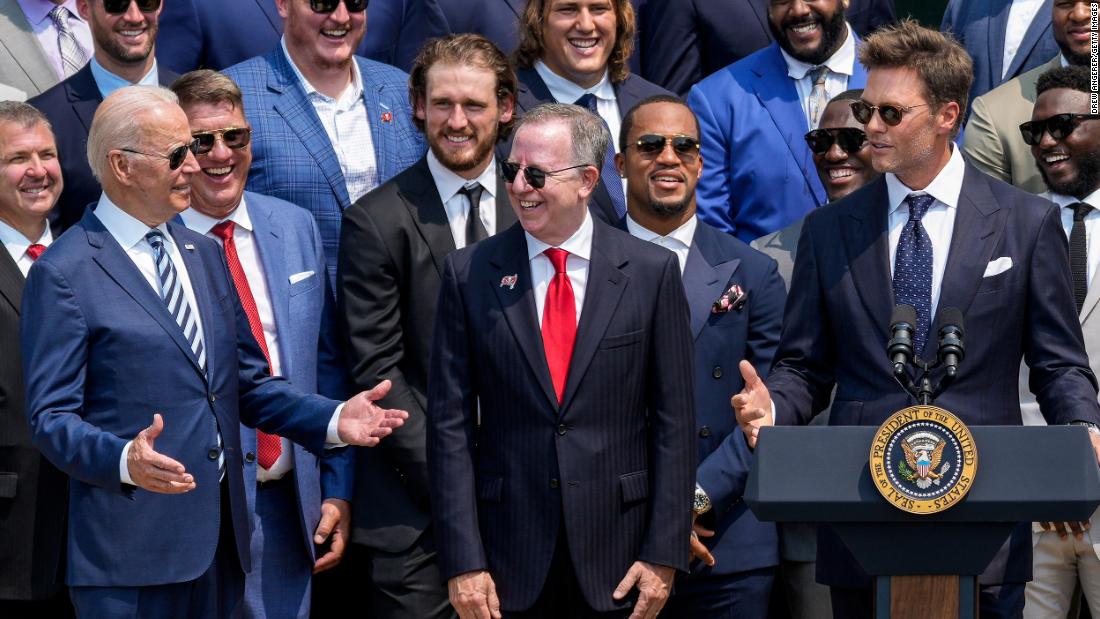 President Joe Biden honored the Super Bowl champions Tampa Bay Buccaneers at the White House Tuesday in a ceremony that featured quarterback Tom Brady cracking a joke about those who continue to deny that the President won the 2020 election.

“Not a lot of people think that we could have won. In fact, I think about 40% of people still don’t think we won. You understand that, Mr. President?” Brady said to laughter. Biden responded, “I understand that.”

He went on to make a joke about how, in a game against the Chicago Bears during the 2020 season, he forgot what down it was “and they started calling me Sleepy Tom,” a nod to former President Donald Trump’s “Sleepy Joe” moniker for Biden during the 2020 campaign.

The Buccaneers’ victory marked the seventh Super Bowl win for Brady. The former Patriots quarterback skipped the 2017 visit to the White House, citing family matters, but had drawn controversy during the 2016 election campaign when a “Make America Great Again” hat was spotted in his locker after a game. Brady also skipped a visit to the White House under former President Barack Obama.

The visit marks the first time since 2017 that a Super Bowl champion team has visited the White House.

Biden said the team was an example that it was “never too late to come together and achieve extraordinary things.”

He praised Bruce Arians, the team’s head coach who became the oldest coach to win a Super Bowl, and Brady, who accomplished the same feat at his position, adding, “You won’t hear any jokes about that from me.”

Biden thanked the team for their contributions “after such a tough year,” and noted efforts to help their community during the pandemic.

He turned around to the team to make his own appeal to those who have not had a vaccine shot. “Get one, get one,” he said, going on to make a longer pitch for vaccinations.

Team co-owner Bryan Glazer spoke, followed by an emotional Arians, who talked about how the team sacrificed their personal lives to get on the field each week during the pandemic.

Arians outlined how the team is guided by trust, loyalty and respect.

“If you have those, you’ll have accountability, and you’ll be able to do anything you want,” he said, turning to Biden to say, “I hope the Senate and the House start helping you. One team, one cause.”

More than 200 people being monitored for possible monkeypox in US