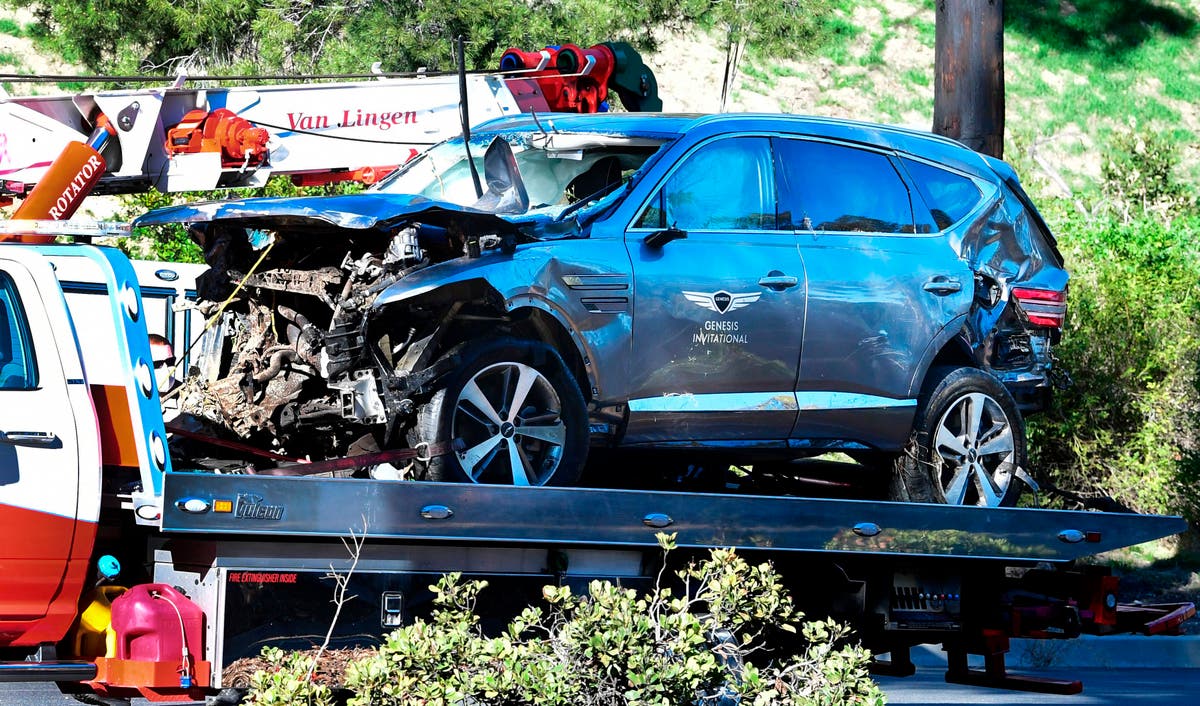 When Tiger Wood’s car left a suburban California road and flipped to a violent stop the golf icon had been on his way to tape teaching lessons with two NFL star quarterbacks.

It was the latest event in a busy week of events on the west coast for the Florida-based superstar.

Woods, who was fighting his way back to full health after a back injury, first hosted the 2021 Genesis Invitational tournament at Riviera Country Club in Los Angeles.

The event benefits Tiger’s foundation, and he was driving a sponsored Genesis GV80 SUV when he crashed in Rancho Palos Verdes on Tuesday morning.

Unable to play himself, Woods was at Riviera for the tournament all weekend, and on Sunday joined Jim Nantz of CBS in the commentary booth.

Tiger was asked if he was going to be fit enough to play in The Masters in April.

“God I hope so. I gotta get there first,” said Woods.

And he added: “This is the only back I’ve got. I don’t have much wiggle room left here.”

After the tournament ended later that afternoon, with Woods presenting the trophy to winner Max Homa, he remained in Southern California for a two-day shoot with Golf Digest/GOLFTV.

“Golf lesson with this guy today. And you know what? He’s not bad… He picks things up very quickly. Good listener,” said Mr Spade on Twitter.

“So I told you I was about to do something amazing today,” said Mr Wade on Instagram.

“Tiger thank you, for teaching me something. How good am I, or how bad am I?”

The following morning, Mr Woods left the oceanfront Terranea Resort where he was reportedly staying, to head back to the golf course.

There, he was scheduled to give lessons to NFL quarterbacks Drew Brees and Justin Herbert on the second day of filming.

But he never made it, and at 7.12am a neighbour who heard the accident called 911 after the golfer’s car crashed on a notoriously dangerous and downhill section of road.

HUNDREDS of girls are missing after a large group of gunmen raided a school in northern Nigeria early this morning.

Rachael Kirkconnell: Stop Defending Me! White People Have a Lot to Learn!

Monster ‘stabs his pregnant wife to death then kills his step-daughter, 5, when she shielded her mum with her body’

Toys for Bob details ‘Crash Bandicoot 4’ upgrades for the PS5