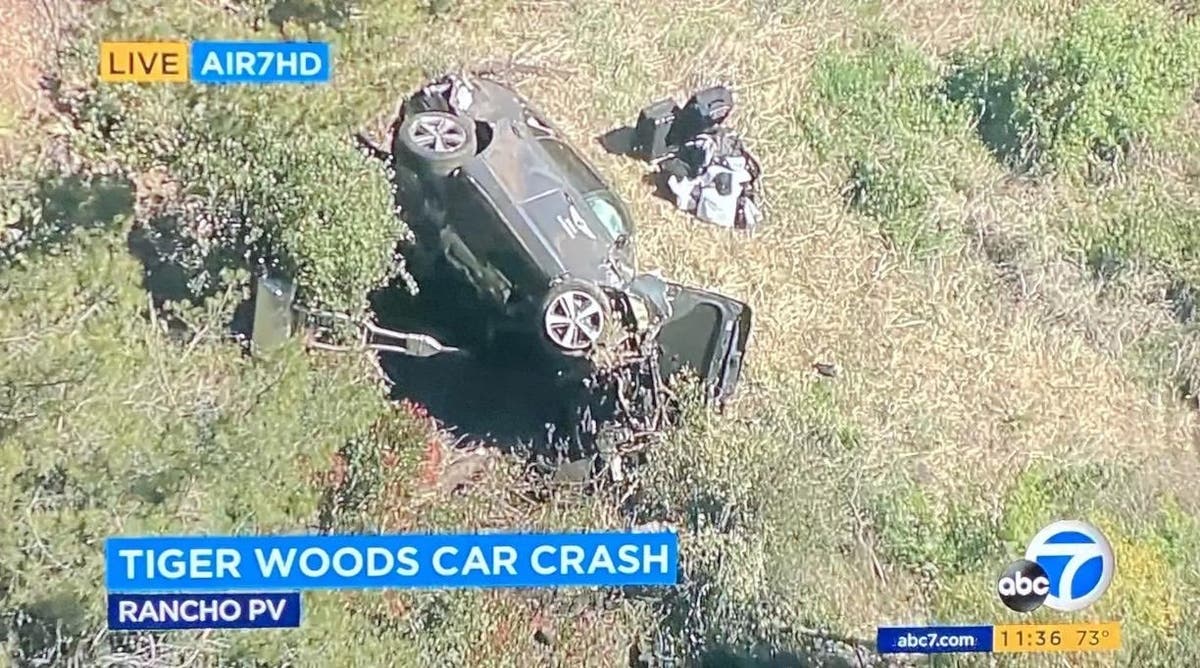 Tiger Woods was hospitalised with “multiple leg injuries” after being involved in a serious car crash in California.

Fire fighters had to free the golf superstar from his Genesis GV80 SUV using a “jaws of life” tool shortly after 7am on Tuesday in Rancho Palos Verdes, near Los Angeles.

Authorities say that his car, which was the only vehicle involved in the crash, rolled over and sustained “major damage” in the incident near Rolling Hills Estates at 7.12AM.

“On 23 February 2021, at approximately 7:12 AM, LASD responded to a single vehicle roll-over traffic collision on the border of Rolling Hills Estates and Rancho Palos Verdes,” the Los Angeles Sheriff’s Department said in a Twitter statement.

“The vehicle was traveling northbound on Hawthorn Boulevard at Blackhorse Road, where it crashed. The vehicle sustained major damage. The driver and sole occupant was identified as PGA golfer, Eldrick ‘Tiger’ Woods.

“Mr Woods was extricated from the wreck with the ‘jaws of life’ by Los Angeles County firefighters and paramedics, then transported to a local hospital by ambulance for his injuries.

“The traffic investigation is being conducted by investigators from LASD Lomita Station.”

The golfer’s agent confirmed that he had sustained significant injuries in the accident and was undergoing surgery at Harbor-UCLA Medical Center.

“Tiger Woods was in a single-car accident this morning in California where he suffered multiple leg injuries. He is currently in surgery and we thank you for your privacy and support,” said Mark Steinberg

The sheriff’s department later confirmed that his injuries, which reportedly include a compound fracture and broken ankle in one leg, are non life-threatening.

A news helicopter showed the black SUV laying on its side with heavy damage sustained to the front end of the vehicle.

It appeared to have come fully off the road and was on a grassy hillside.

Police say that another car, not involved in the initial accident, stopped after the crash and was rear-ended.

Mr Woods was driving a sponsored Genesis GV80 SUV at the time of the crash, theLos Angeles Times reports.

It is the only SUV made by the little-known car brand, which is owned by Korean automaker Hyundai, and was promoted by Mr Woods at the Genesis Invitational.

It has 10 airbags, a forward-collision warning system, evasive steering technology and an interior camera that alerts the driver if they’re falling asleep.

Mr Woods, 45, was in California for for a two-day content shoot with Golf Digest and GOLFTV and had recently finished hosting duties at the PGA Tour’s Genesis Invitational last weekend, which was won by Max Homa.

The golfer was joined by former NBA player Dwyane Wayde and comedian David Spade for filming at the Rolling Hills Country Club in the coastal city in Los Angeles County on Monday.

“Golf lesson with this guy today. And you know what? He’s not bad… He picks things up very quickly. Good listener,” tweeted Mr Spade.

Mr Woods was on his way back to the course for a second day of filming when the accident happened.

Tour players at this week’s WGC-Workday Championship were shocked by the news.

“I’m sick to my stomach,” said an emotional Justin Thomas.

“You know, it hurts to see one of your — now one of my closest friends get in an accident. Man, I just hope he’s all right. Just worry for his kids, you know. I’m sure they’re struggling.”

The PGA Tour also put out a statement on the crash.

“We have been made aware of Tiger Woods’ car accident today. We are awaiting further information when he comes out of surgery,” said Commissioner Jay Monahan.

“On behalf of the PGA Tour and our players, Tiger is in our prayers and will have our full support as he recovers.”

The golfer’s ex-girlfriend, skier Lindsey Vonn, took to Twitter to send him her prayers.

“Praying for TW right now,” tweeted Ms Vonn, who dated him for more than three years before they broke up in 2015.

“Thoughts are with @TigerWoods and others involved. Wishing a speedy recovery and I hope the injuries are not bad,” he tweeted.

Woods was last in action at the PNC Championship, which concluded on 20 December, he played the event alongside his son Charlie.

After successfully undergoing a fifth back surgery in January to remove pressure from a disc fragment in his spine, Woods spoke of his optimism at playing in this year’s Masters, a tournament he won in 2019 to end an 11-year drought in major championships.

“Have one more MRI scheduled to see if the annulus has scarred over finally, and then I can start doing more activities. Still in the gym, still doing the mundane stuff that you have to do for rehab, the little things before you can start gravitating towards something a little more.”

This is the third police investigation involving Florida-based Mr Woods and his driving.

In 2009 his SUV ran over a fire hydrant and hit a tree at Thanksgiving which resulted in the revelation that he had cheated on wife Elin Nordegren with a string of women.

After the incident Mr Woods lost many of his lucrative corporate sponsorship deals, went to rehab in Mississippi and did not play golf for five months.

In May 2017, police in Florida found Mr Woods asleep behind the wheel of his car on the side fo a road.

He was arrested for DUI and later said he had suffered a reaction to prescription pain medication he was taking for back pain.

Mr Woods later pleaded guilty to reckless driving and received treatment for his use of prescription medication and a sleep disorder.

An HBO documentary last month tackled his stunning rise as the world’s best golfer and his public shaming in 2009 and 2010 following the breakdown of his marriage.

Before the crash it was already unclear if Mr Woods would be able to play in the Masters tournament in April.

And speaking this week he admitted that there may not be much left for surgeons to do for his back issues.

“This is the only back I’ve got. I don’t have much more wiggle room there,” he admitted.

Israel asked US not to lift Trump-era ICC sanctions: Report

‘Cult members only come out for the cult leader’: Lara said to be first Trump set for 2024 run – but can she win?

‘Hard to see the path out’: Cuomo besieged as crises grow