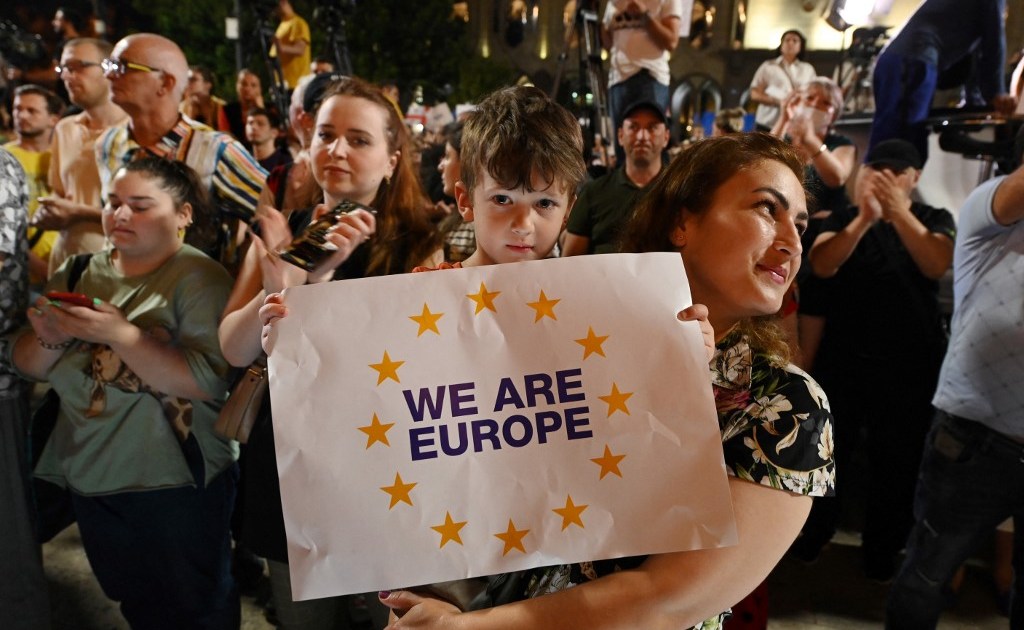 Thousands of people in Tbilisi have turned out to demonstrate for a closer relationship with the European Union, days after the European Commission recommended deferring Georgia’s candidacy.

Waving Georgian, Ukrainian, and EU flags, an estimated 60,000 demonstrators gathered outside the Georgian parliament for the “March for Europe” on Monday.

Many held placards that read “We are Europe” as the EU anthem, the Ode to Joy, was performed at the demonstration.

Nodar Rukhadze, one of the organisers of the march, said that the purpose of the demonstration was to send a message “that the citizens of Georgia have made a European choice and are ready to defend this choice.”

“The door is wide open,” she said, adding: “The sooner you deliver, the sooner there will be progress.”

The rally was initiated by the Black Sea nation’s leading pro-democracy groups and supported by all of the opposition parties to “demonstrate the commitment of the Georgian people to its European choice and Western values”.

“Europe is a historical choice and an aspiration of Georgians, for which all generations have given sacrifices,” the rally organisers said on Facebook.

Ahead of the rally, Georgian President Salome Zurabichvili, said in a televised address: “We must mobilise on this historical day for our country. Our message is that we want a European Georgia.”

Georgia, which borders Russia in the north, applied to join the EU shortly after Moscow launched its attack on its neighbour in February, as did Ukraine and Moldova.

The 27 EU member states will discuss the applications of the three states on Thursday and Friday.

Relations between Georgia and Russia have been strained since the 2008 Caucasus war, when Moscow recognised the breakaway territories of South Ossetia and Abkhazia as independent states and stationed thousands of its soldiers in those areas.

Ukraine, Georgia, and Moldova have signed association agreements with the EU designed to bring them closer together economically and politically.

The agreements also include free trade deals between the countries and the EU as well as visa-free travel for its nationals for a short stay in the Schengen area.

But they give no guarantee of eventual membership.

Crowded Ukraine shopping mall with more than 1,000 people inside hit by missile strike

A Russian missile strike has hit a crowded shopping centre in the central Ukrainian city of Kremenchuk, President Volodymyr Zelensky