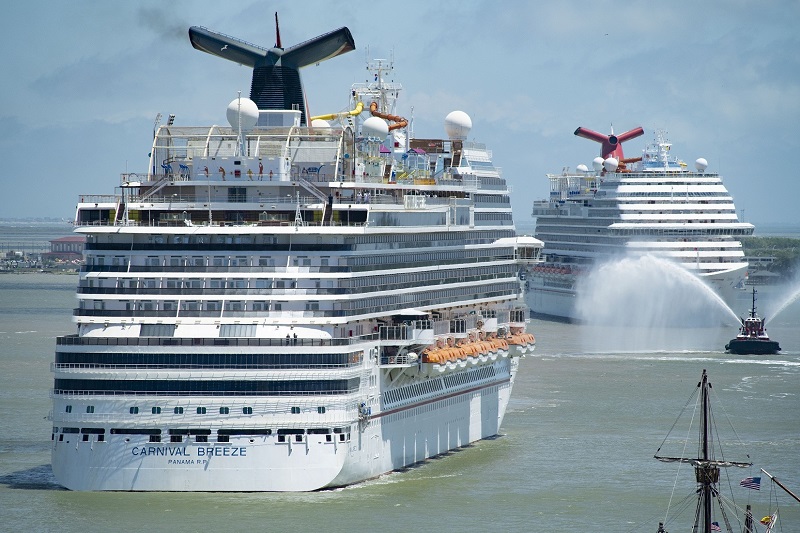 On Sunday, two of Carnival Cruise Line‘s Texas-based ships, Carnival Breeze and Carnival Vista, sailed into the Port of Galveston. The sight of two large ships returning to the port was exciting for many cruise fans who turned out to welcome the ships.

The ships’ return precedes a “cruise rally” planned Monday at the port. Hosted by the Federal Maritime Commission (FMC), the rally will discuss the economic impact of 14 months of no cruise operations at the port, the fourth largest in the country. Galveston’s cruise business generates $1.6 billion in expenditures annually and 27,000 jobs statewide.

Carnival Cruise Line launched the first year-round cruise program from Galveston in 2000 and is the only cruise operator with three year-round ships based at that port; the ships carry 750,000 guests annually.

Certainly, the most welcome news of the past week was confirmation that the U.S. Centers for Disease Control and Prevention (CDC) had sent a letter to the cruise industry providing more technical detail and clarifications to its April 2 guidance. This included the potential to allow the industry to restart cruises from U.S. ports by mid-July. The letter said, for example, that cruise lines can bypass a simulate test voyage with volunteers and go right to operating cruises with paying passengers if 98 percent of crew members and 95 percent of passengers are fully vaccinated.

In addition, the CDC says it will review and respond to any applications for simulated voyages within five days—way down from the previous 60-day review period the agency had previously planned.

But it typically could take 60-to-90 days to “ramp up” a ship for operation with crewing, training, repositioning and provisioning. So, is mid-July realistic?

At a Travel Leaders Group press briefing on Friday, John Lovell, that group’s president, explained that several major cruise companies did not send all crew home and they’re currently working to repatriate crew, too. So by mid-July and August, he sees “a slow ramp up” and “hopefully by the end of the year, we can have 50 percent of the hardware back in the water.”

Right now, the cruise industry is losing $1 billion a month, with several big companies losing hundreds of millions monthly. So, “most importantly, I think what we need is to get ships back in the water, have success and, at the same time, build [on the number of ships returning to service],” Lovell said.

Lovell continued: “The cruise lines I know will do it in a very, very methodical manner. It really comes down to access to vaccinations or vaccines and repatriating the crew.”

He also said cruises were “selling very well” right now. He believes the overseas homeports—ports that typically don’t have turnaround operations such as Nassau, Bahamas—will do fine on the operational side as they’ll receive input from cruise lines with plenty of experience:  “The cruise lines really know how to move people,” Lovell emphasized.

Royal Caribbean Group announced that it will support Alaska businesses that have suffered economically during the pandemic and loss of cruise visitation. It’s sending past cruise guests messaging to encourage them to shop online and support these businesses via the Shop Alaska Program.

Uniworld Boutique River Cruises announced its first “Mystery Cruise” in Europe, slated for 2022, and it sold out in 48 hours—so, the river line decided to add a second 2022 “Mystery Cruise.”

Celebrity Cruises revealed its “dream team” of designers for the third Edge-class ship, Celebrity Beyond, and outlined new and larger spaces onboard the new ship, setting sail in spring 2022.

MSC Cruises began a fleetwide crew vaccination program. The initial phase involves vaccinations for crew on ships currently operating, and also crew for vessels expected to restart cruising this summer (including ships sailing from the U.S.) It also announced that MSC Seaside is back sailing in the western Mediterranean.

Azamara Will Restart Cruises in Greece, Cancels Other Voyages

Cruising for Couples: The Latest Trend