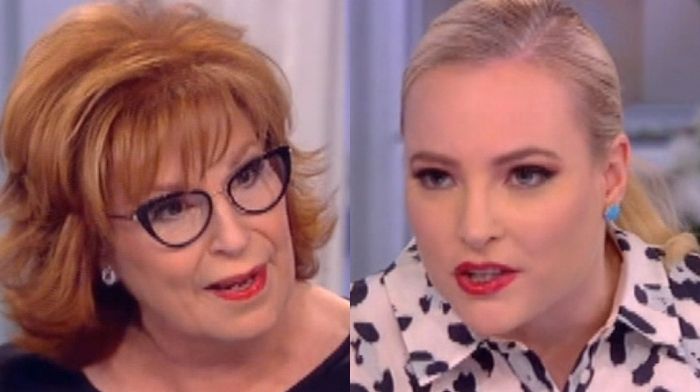 The ABC talk show “The View” went off the rails once again on Friday as hosts Meghan McCain and Joy Behar argued over Rep. Liz Cheny (R-WY) fist bumping President Joe Biden before his State of the Union speech on Wednesday night.

Cheney fist bumping Biden got her backlash from Republicans, something that did not sit well with Behar.

“I hate her policies, but shouldn’t Liz Cheney be applauded for having the guts to take on this cowardly and endless coddling of Trump?” Behar asked. “I just want to get this straight. They’re upset because Biden isn’t reaching across the aisle, but when one of their own literally reaches across the aisle, they consider it a non-starter and possibly a disgrace.”

“I think Republicans are tribal,” McCain explained. “Right now, we were sold a bill of goods of President Biden being a moderate and reaching across the aisle. And other than physically fist-bumping, he should be doing things that are more concrete, like actually working together on bills and things to fix the country.”

“You know what, this tribalism thing is one thing, but this is just a matter of common courtesy, that’s all, and they freaked out over it,” Behar responded. “You can disagree with Biden’s policies until the cows come home. That doesn’t mean you can’t shake a person’s hand. What is that?”

Related: Meghan McCain Unloads On Democrats For Racist Attacks On Tim Scott – ‘I Am So Grossed Out’

“Can I say, this is what it is, because for the last four years we were told by people —” McCain shot back before Behar interrupted her to say she only had twenty seconds before they would cut to a commercial break.

“Well don’t tell people to go up and be violent towards Republicans in restaurants and people in the Trump administration like Congresswoman Maxine Waters did,” McCain said. “So like, let’s call a spade a spade here. The left is just as bad. Please!”

“I don’t agree with that of course, but okay,” Behar said as she cut to commercial

Check out the full fiery exchange below.

REP. LIZ CHENEY SLAMMED FOR BIDEN FIST BUMP: The moment when the GOP congresswoman exchanged a fist bump with Pres. Biden as he made his way to deliver his speech at the #JointAddress is being criticized by some conservatives – the co-hosts weigh in. https://t.co/cVclFZQmjA pic.twitter.com/z4uhDvCjlZ

This piece was written by James Samson on May 1, 2021. It originally appeared in LifeZette and is used by permission.

Read more at LifeZette:
Meghan McCain Calls Out ‘The View’ For ‘Liberal Bias’ – ‘There’s A Reason Why Fox Is Killing It In The Ratings’
Leftist Racists Run Wild At California Rally
Pelosi Says She’ll ‘Never Forgive’ Trump For ‘Trauma’ Caused By Him And Capitol Rioters

‘Like searching for a unicorn’: Few moderates in sight as GOP plots Cuomo takedown