The first major heat wave of the season could set records later this weekend in the West, bringing life-threatening heat, and temperatures that could skyrocket into triple digits throughout next week.

Highs from the Desert Southwest to the Northern Rockies are expected rise 15 to 25 degrees Fahrenheit above average by mid-week, long term forecasts from the Weather Prediction Center (WPC) show. 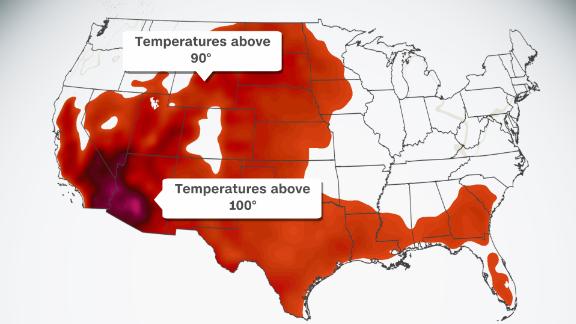 At least 10 states in the West could experience scorching conditions. Even areas as far north as Montana may see temperatures soar into the 100s by Monday.

Western Colorado and southern Utah are likely to break records as high temperatures reach well into the triple digits.

“In a lot of these cases we’re looking at, based on our forecast, breaking record high temperatures,” said Meteorologist Kris Sanders at NWS Grand Junction. “Not only for the daily records, but possibly getting close to the all-time records that we’ve seen.”

Conditions throughout the week will increase the risk of heat-related illnesses.

Heat is the leading cause of weather-related deaths on average in the United States over the last thirty years, according to the National Weather Service.

“The combination of extreme daily temperatures and duration, as well as being rather early in the season for such an event, should make this a dangerous heat wave for sensitive groups,” stated the WPC in its extended forecast discussion.

With serious heat coming in a few days, it’s always a good idea to think about how your plans might be affected and how you can adjust your activities. Lower deserts jump to 110 or above starting Sunday. Record highs may be broken starting Tuesday. #heatsafety #azwx #cawx pic.twitter.com/YK0nJuWp7y

The most extreme heat will impact the Desert Southwest. The National Weather Service in Phoenix has already issued excessive heat watches and warnings for southwestern Arizona and southern California, with temperatures expected to peak over 110 degrees.

Temperatures in New Mexico will follow suit into the weekend as a high-pressure system heats the region.

“We are expecting temperatures to be near to record-breaking, even across much of the state through early next week, so not a lot of relief,” said NWS Albuquerque, New Mexico Meteorologist Sharon Sullivan. 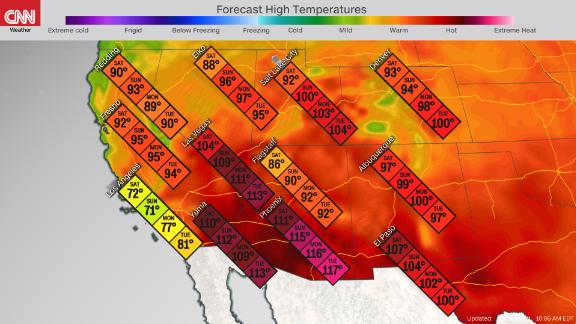 The heat wave will impact areas already notorious for their blazing summertime weather.

NWS Las Vegas has issued an excessive heat warning for next week, in effect from Monday through Friday, for Death Valley, California, due to the potential for temperatures to top 120 degrees Fahrenheit.

Drought conditions have continued to deteriorate in the West this week, due to the lack of moisture and hot temperatures.

The entire states of California, Utah, Nevada, and Oregon are in a drought – and the region could reach near-record highs by Wednesday.

Relative humidity values have the potential to drop into single digits, prompting concerns the drought will only worsen. The region will continue to dry out through the week, and the resulting parched brush provides the perfect food source for hungry wildfires.

Large fires in Arizona and New Mexico continue to devour the hillsides, fueled by high winds earlier in the week. Winds will die down into the weekend, hopefully helping to slightly quell the fires.

“As far as the temperatures are concerned, they don’t drive the fire as much as the winds, relative humidity, and also the dryness of the vegetation,” said Meteorologist Marvin Percha at NWS Phoenix. “Fortunately for the weekend, our winds are going to be, for the most part, relatively light.”

The Telegraph fire, burning east of Phoenix, has burned more than 85,000 acres, with the Mescal fire just to its east burning more than 72,000 acres as firefighters strain to control them.

A lull in the wind could provide the break needed for firefighters to overtake the blaze, but that is not the fire fighters’ only concern.

“They’re going to have more issues just dealing with the heat in general with the fire crews,” said Percha. 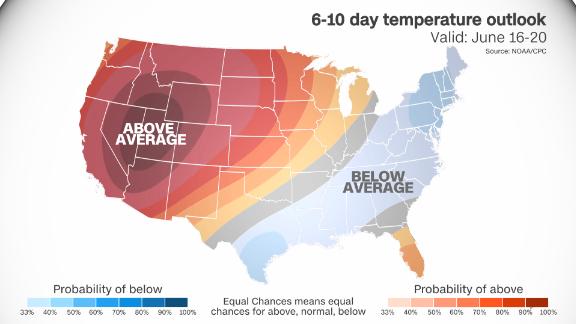 Fire danger will remain elevated due to dry conditions and blazing hot temperatures. The six to 10-day temperature outlook provided by the Climate Prediction Center indicates that the pattern of above-average temperatures will remain throughout the coming week.