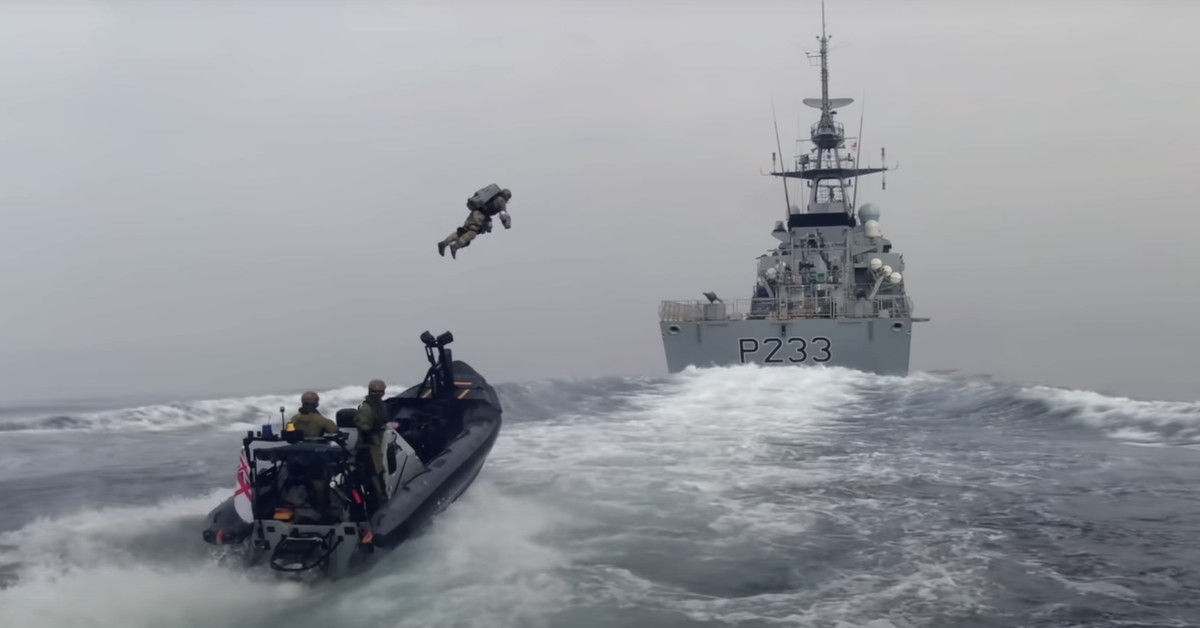 The British Royal Navy has apparently been testing using jet suits to board ships like a scene out of some scrapped Christopher Nolan film, according to a new video released by UK-based Gravity Industries. Business Insider writes that the tests were conducted over three days on the HMS Tamar, a Royal Navy Batch 2 River-class offshore patrol ship.

Royal Marines used Gravity Industries’ Jet Suit to conduct a “visit, board, search, and seizure” operation or VBSS. Basically a marine launched from a fast boat tailing the HMS Tamar, flew through the air like a slightly askew Iron Man, and landed on the larger ship, dropping a rope below so their fast boat buddies could climb up and “visit” the simulated enemy vessel.

The whole thing is very cool, to the point of almost seeming like a wire-assisted fake, and likely as much an ad for the Royal Navy and Gravity Industries as it is an actual test of the Gravity Jet Suit’s utility in a naval exercise.

If the suit or its creators sound familiar, it’s because the company has been demonstrating its Iron Man tech for a while now, though in the past, Gravity Industries CEO Richard Browning has been in the pilot seat (or suit, in this case). This also isn’t the first time the Royal Navy has helped demo the tech. In 2019, Browning flew an earlier version of the Jet Suit through the Royal Navy’s assault course. Gravity Industries has also collaborated with the Dutch Maritime Special Operations Force (SOF) to put the suit through its paces.

The suit seems to have been streamlined since these earlier demonstrations, featuring smaller arm rockets and a sleeker backpack jet more fitting for whatever sci-fi movie vibe Gravity Industries seems to be cultivating. What is sort of disappointing is mostly finding military applications of this technology when there are clearly plenty of other uses. Luckily, Gravity Industries has us covered there, too: the company has tested using the Jet Suit with the Great North Air Ambulance, a UK charity that rescues people from mountain ranges and a variety of other emergency scenarios in Northern England.

Snap can be sued for fueling a fatal car crash with its speed filter, court rules