Karriss Artingstall has already acquired a “spiteful” style in the amateur ranks and will be a “very dangerous” proposition when she makes her pro debut, says former GB team-mate Frazer Clarke.

There is a quality that makes Karriss Artingstall stand out. She hits hard, very hard. Even as an amateur, at the highest level in Olympic Games and World championships, while wearing headguards and the more cushioned gloves when Artingstall landed a hard straight shot you could see the impact. It’s a sign that as a professional fighter Artingstall should have ferocious one-punch power.

She will have her first professional fight in Coventry this Saturday, live on Sky Sports.

Heavyweight Frazer Clarke, who captained Artingstall’s Olympic team and knows a thing or two about power-punching himself, said, “Spiteful is the word, and aggressive.”

“I think she is more suited to the pros,” he continued. “I think Karriss is a more natural pro. I think she’s more spiteful and she is a big puncher for the weight. So I expect big things from her. We’ll see after the debut but I think if her nerves are sorted [after the first fight] and as she gets more used to the pros I think she’s going to be very dangerous in the division and I expect really big things from her to be honest.”

There is more to Artingstall’s skillset of course. Olympic bronze medals are hard-won accolades. The 27-year-old not only finished on the podium at the Tokyo Games, in a rapid rise through international boxing she also medalled at the 2019 Europeans and Worlds.

However even for a top Olympian like Artingstall plotting a course through the professional sport is a new, unpredictable challenge. Natasha Jonas, who impressed at the 2012 Olympics, was stopped in her seventh pro fight but went on to become the WBO champion earlier this year, explains, “The style of it is different. You’ve got to box and be smart and stay concentrated, and the headguard’s off so it’s different.”

“Look at the likes of Tom Stalker, Frankie Gavin, Andrew Selby [in their time truly world-class amateur boxers]. It didn’t quite work out for them but then there’s a lot of people who don’t even have a great amateur career that are world champions; Kell Brook, Terri Harper, whoever. It works for some people. It just depends on you your style and how you develop,” Jonas continued.

“The good thing about being an elite amateur, there isn’t probably a person that you haven’t fought and to go into people’s backyards and go abroad and whatever, isn’t something that’s unnatural. So you’ve got an advantage that way. People know your name so you’ve got an advantage that way. But when it comes to the actual sport of boxing and how it is and the business of the pro game, you’re at a disadvantage because you’re babied, especially being on that GB squad, everything is done and prepared. You’re told what to do and where you’re going.

“Nothing’s a given, not at all. You’ve got to work hard. Unfortunately!”

Lauren Price, the Tokyo Olympic gold medallist, made her pro debut earlier this month, handily outboxing Valgerdur Gudstensdottir over six two-minute rounds. Price is not far from Natasha Jonas’ weight class and the latter was an interested observer of the Welshwoman’s first step into pro boxing.

“I thought she was very good. She’s exactly what we’ve seen in the Olympics. She’s quick hands, good feet and good timing. She’s got the nerves gone, her opponent wasn’t just a push over to be fair. She took some good shots. She got herself on the way. I think now she’ll settle in and calm down and learn the pro game because it is different. I think everyone wanted her to go in and blow her out. That’s not going to happen every time. Even us on comms were quick to jump to a lot of Katie Taylor references. She doesn’t have to be Katie Taylor. She can just be Lauren Price,” Jonas told Sky Sports.

“She’s 27, she’s got a long time. She doesn’t need to rush anything. Rob [McCracken, her trainer] is pretty clued up anyway. Rob won’t let her rush. Rush for what? Be champion and then what you do. Once you’re champion you’re waiting to get more belts or you’re waiting for your mandatories to pop up. The problem with that is, there isn’t really much to do once you’re champion so once you’ve rushed and got to there, you’ve got to stay there that’s the hard part. So enjoy the process, enjoy the learning, developing as you go along and then you can be champion. There’s no rush.” 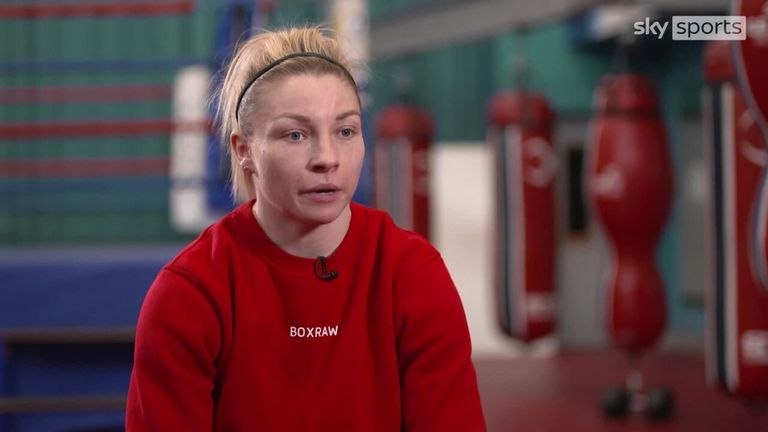