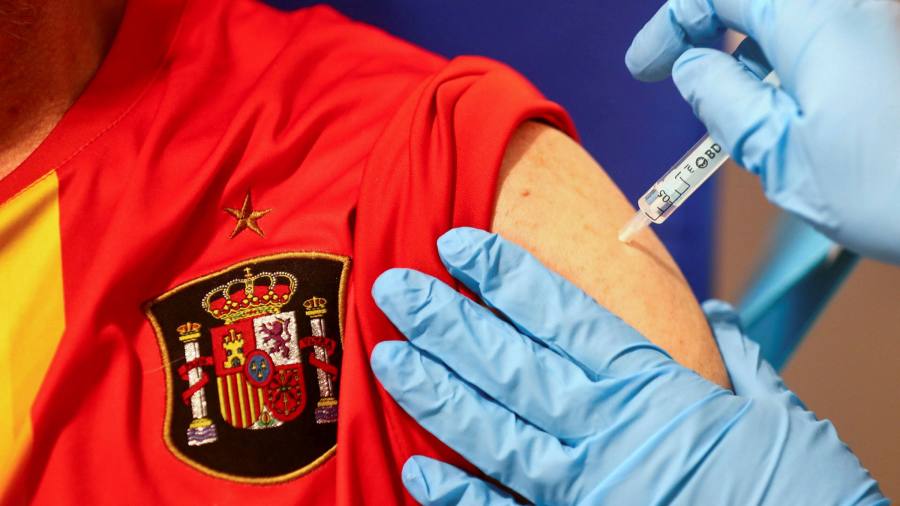 Spain and Italy have moved to limit the use of the Oxford/AstraZeneca vaccine to people aged above 60, in shifts that will complicate the countries’ efforts to step up their vaccination programmes.

The decisions by Madrid and Rome on Wednesday night came after the European Medicines Agency said earlier in the day that there was a link between very rare blood clots in the brain and the AstraZeneca jab.

While the EMA, the EU’s pharmaceuticals regulator, did not change its guidance for who should take the vaccine, it noted that “so far, most of the cases reported [of blood clots] have occurred in women under 60 years of age within two weeks of vaccination”.

Belgium separately restricted the AstraZeneca vaccine to those aged 56 or older for a minimum of four weeks on Wednesday. Australia moved on Thursday to limit further use of the shot in those younger than 50, with Canberra saying the BioNTech/Pfizer inoculation should be used instead.

France and Germany had also previously restricted the use of the shot for the over-55s and over-60s, respectively — trusting that other vaccines, such as that from BioNTech/Pfizer and a new one-shot inoculation from Johnson & Johnson, will be sufficient to make up the lag in the EU’s vaccination programme.

The UK, which is well ahead of the EU in the vaccine rollout, abruptly changed its guidance over the AstraZeneca vaccine on Wednesday, recommending that people aged between 18 and 29 are offered alternative jabs. Sweden and Finland allow its use only in the over-65s, while Denmark and Norway have suspended its use until at least next week.

Spain’s decision to use the AstraZeneca vaccine only for people over 60 reverses the country’s policy of just a few weeks ago — until last month it banned the use of the jab for those over 55.

The new stance could make it more complicated to reach Spain’s goal — announced on Tuesday by Prime Minister Pedro Sánchez — of vaccinating 70 per cent of the population, 33m people, by the end of August.

Isabel Díaz Ayuso, head of the Madrid regional government, who is seeking to retain her post in elections next month, criticised the rule change.

“You can’t constantly change the criteria,” she said on Thursday. “You can’t switch halfway through the game when many people are already vaccinated, and when there was at last beginning to be some clarity about which vaccines were for which groups of people.”

Varied advice on the Oxford/AstraZeneca vaccine

At present, 6.4m Spaniards have received at least one dose of a Covid-19 vaccine. Of those, slightly more than 2m have received the AstraZeneca jab, whose use had been accelerating in recent weeks. But, according to official figures issued on Wednesday night, only 97 people in the entire country have received a second AstraZeneca dose.

Carolina Darias, Spain’s health minister, said the country had not decided whether to administer AstraZeneca or another vaccine to people under 60 who had already received a first shot of the jab.

The Italian health ministry also issued new guidance overnight saying the AstraZeneca vaccine should be given “preferential use” in those aged 60 and above. The guidance noted the risk of clots, while acknowledging that it was low, and adding that the risk of severe Covid-19 increases with age.

Italian officials told a press conference on Wednesday night that the risk-benefit ratio was still significantly slanted towards administering the vaccine. Italy had also initially limited the use of the vaccine to younger patients, removing age limits as more data became available.

Rome’s new guidelines clarified that those who had already received a dose of the AstraZeneca shot should complete their vaccination with the same jab, regardless of age.

AstraZeneca on Wednesday acknowledged the findings from the EMA and the UK’s Medicines and Healthcare products Regulatory Agency, while noting that more than 200m doses of the shot had been administered worldwide with a relatively low number of side-effects.

The Anglo-Swedish drugmaker said it was working with global authorities to better understand the side-effects. The EMA has ordered further studies, to be conducted with the Utrecht University and the Erasmus university in Rotterdam.

India-Russia dialogue at ‘sustainable highest’ even amid Covid-19: Lavrov