Michael Smith beat Clayton for his first victory of the Premier League; Joe Cullen finished fourth in the table, taking him through to play-off night in Berlin alongside Jonny Clayton, Michael van Gerwen and James Wade; Cullen eliminated Peter Wright 6-4 in a tense quarter-final 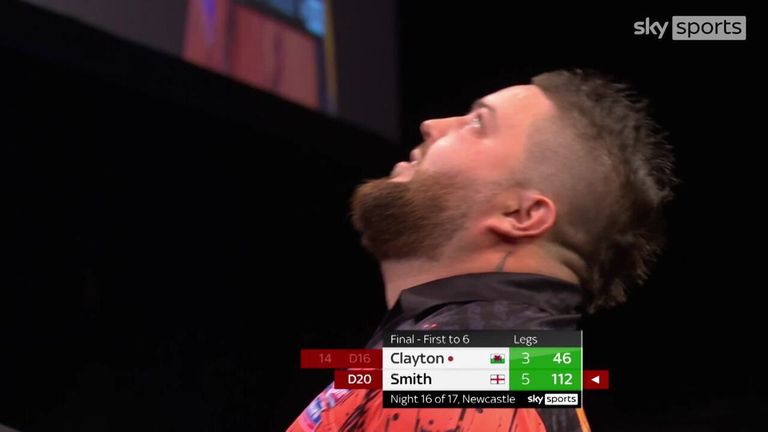 Smith had been on an unlucky run in the Premier League and was the only player left to have not won a night but managed take his place in another final by beating Van Gerwen and Price in convincing showings.

Although many were expecting a close encounter in the final, Smith found himself 4-0 up after stunning Clayton, who was unable to find any consistency on the trebles.

After weathering a Clayton fightback to bring the tie to 4-3, Smith was able to hold his throw and then find a lovely 180 to seal his first Premier League win.

The St Helens man was happy with his performance but admitted that, more than anything, it was nice to show the trolls that he can win a night. 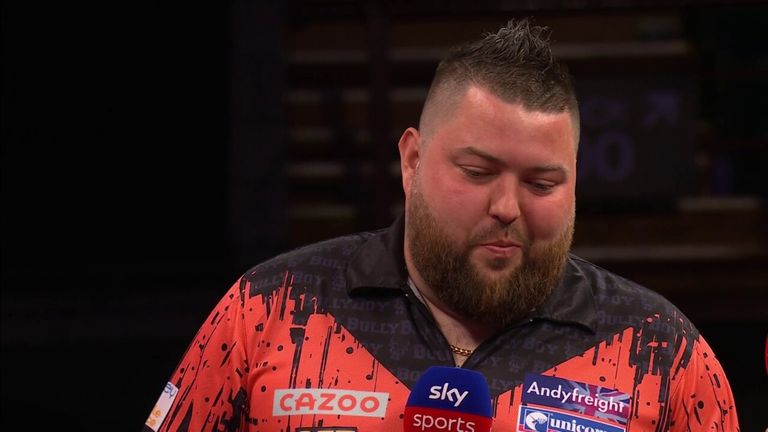 “That is why I turn up every week and why the PDC have trusted me to be in the Premier League,” said Smith.

“All the trolls were ready then to say I have not won a night but I finally got one and it went in and I am over the moon, I have finally got a win in the Premier League.

“I kind of separate myself from everyone. There is me, Joe and Jonny and I sit with Gary all the time and practice with Joe and Jonny. They are nice as pie but you know Joe he can have his few digs.

“He isn’t malicious, he is just having fun and it kind of spurs you on when the players are doing it.

“It is when people back home are doing it and they have never thrown a dart in their life and they think they are Phil Taylor all of a sudden. That is the worst bit.

“I am gutted I am not in the semis but the last four or five weeks I have been showing what I can do.

“I played Jonny and beat him, I have beaten Van Gerwen twice so I have been there. It just took too long to do it but I am finally happy to get a night win and that I didn’t turn up and not win anything.” 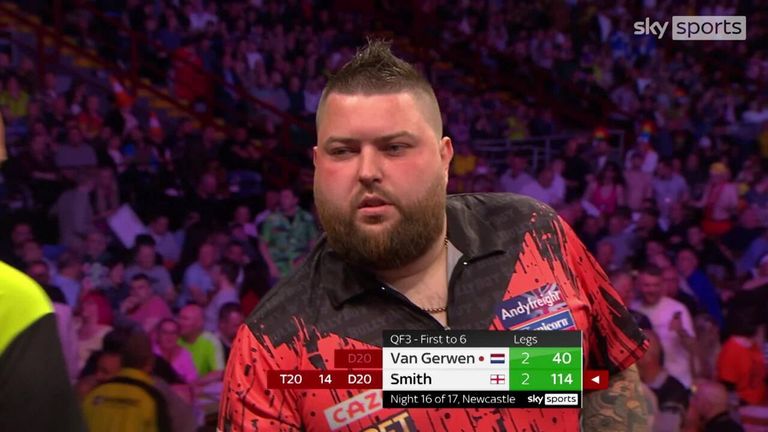 Smith was in fine form throughout the night, making it back-to-back victories against Van Gerwen in a 6-4 quarter-final.

After breaking the Green Machine’s throw to make it 3-2, Bullyboy continued a cool and calm performance to take him through to face Price.

After an opening leg break from Price, Smith managed to regain momentum and break straight back to regain the throw.

He then managed another break later in the clash to make it 4-2, a well-timed 180 in the final leg giving him the space to secure a final spot.

Cullen secured the final play-off spot in Berlin in what was a tense 6-4 victory over Peter Wright.

Both players were averaging around 95 in the encounter, however it was Cullen’s finishing on the doubles that gave him the edge over Snakebite. 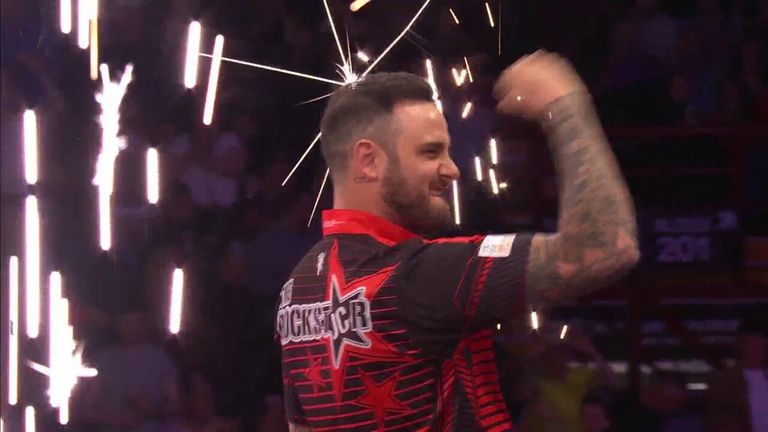 He checked out on D16 a total of five times, including with his winning dart, breaking Wright’s throw and seeing himself through to finals night in Berlin.

Despite the pressure on Cullen, he admitted he felt strangely comfortable in his quarter-final encounter with Wright.

“The thing is with Peter he is a class, class player and a class fella as well,” said Cullen.

“D16 was great for me but as you saw at the end, I kept it in a bit to have a bit of respect for Peter then just give it some at the end.

“I am over the moon to be in Berlin. 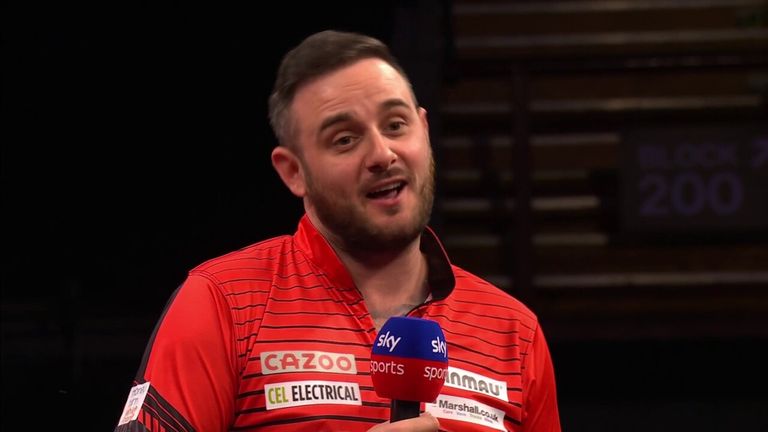 “The Premier League has been so erratic for me this year and I felt so comfortable tonight. It is really strange.

“There have been some weeks when I have been under no pressure and not played great, then this week I am under this amount of pressure and produce that.

“I don’t think it was the greatest average but if you finish like that you give yourself a chance.”

Despite his quarter-final win, the Rockstar was unable to overcome Jonny Clayton in the first semi-final of the night. 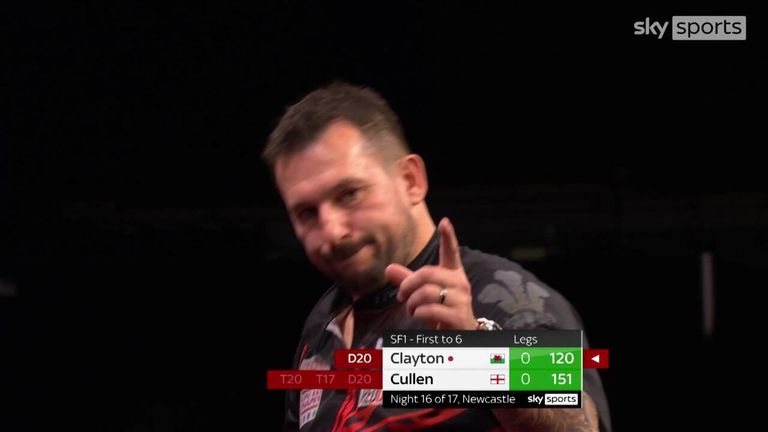 Cullen hit a lovely 128 to break Clayton in the opening leg, but in typical from, the Welshman fought back to take three legs in a row and a 6-4 win.

Clayton overcame Gary Anderson 6-5 in the opening quarter-final in Newcastle, the Scotsman forcing a deciding leg after leading 3-1 earlier in the encounter.

However, Clayton managed to hold, finding his only maximum of the match up to seal a victory.

He then came up against Cullen, coming back from 3-1 down, winning three legs in a row and securing his final spot.

Play Off Night: June 13 in Berlin

Check out daily Darts news on skysports.com/darts, our app for mobile devices and our Twitter account @skysportsdarts. Next, Premier League Darts heads to play off night in Berlin on June 13, with Jonny Clayton up against Joe Cullen, and Michael Van Gerwen up against James Wade, the winner of each match up facing off in the final.

Lampard: The character of the club got us through