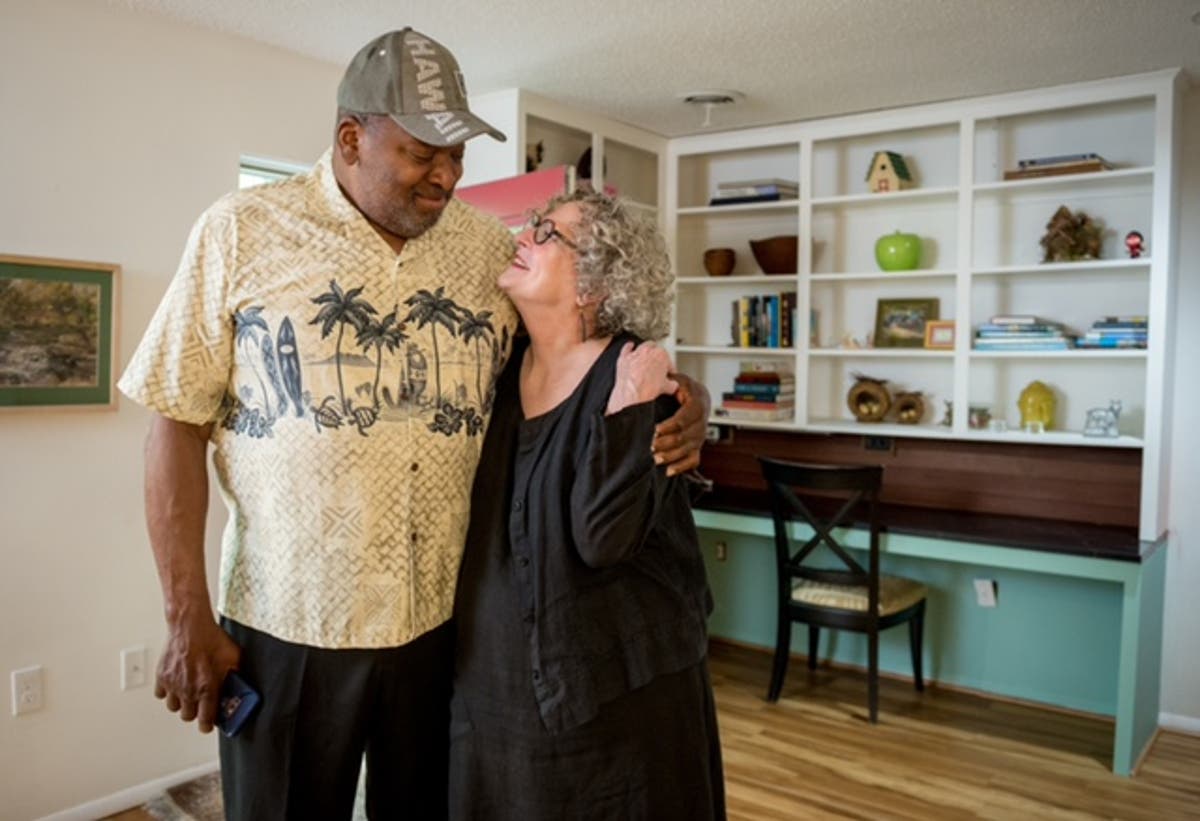 He was a Penn State football player, a big man on campus – literally. She was a business administration major, one of just a few women in the programme in 1978. Betsy Sailor was just a regular, studious coed until a man broke into her off-campus apartment and raped her at knifepoint; it turned out to be a player on the football team.

Most of his teammates initially stood behind the rapist. But when Penn State player Irv Pankey heard Ms Sailor bravely recount her attack in court, he believed her – and later introduced himself, protecting her for their remaining years at school.

More than 40 years later, they shared their incredible, unlikely story and friendship with ESPN. The experience brought them together for the first time in decades; before the days of social media, they’d lost touch and moved to different coasts.

But they not only reconnected during the making of the documentary.

They also fell in love.

“We found out that we had a lot more in common, I guess, than we thought – and it’s kind of taken off from there,” Mr Pankey told Paula Lavigne, who chronicled the tale with Tom Junod in ESPN’s article Untold.

“And it’s kind of taken off from there,” he told her in a recent interview.

The development may not come as too much of a shock to anyone who viewed the video Ms Lavigne made with director Nicole Noren, Betsy & Irv, which can be viewed on ESPN+.

It shows Mr Pankey knocking on a door answered by Ms Sailor, and they immediately embrace, a much shorter Betsy leaning on her tall protector’s shoulder with her arm around him in much of the footage. The pair exude chemistry, affection, gratitude, nostalgia and, in retrospect, the beginnings of love.

“I’m crazy about him,” Ms Sailor told Ms Lavigne over Zoom. “I feel so honoured to be by his side. He’s such a great guy.”

She added: “I got to kiss him for the very first time after 40 years, and it was a lovely kiss – and so I hope to do more of that.”

After they both left Penn State, Mr Pankey married and played 12 seasons in the NFL; Ms Sailor also married and worked in HR. Both had children – and both suffered the loss of a spouse.

“How all this transpired to bring us back together after 40-some years, all these different things had to fall into place,” Mr Pankey said. “I think we both love each other; we work.”

Ms Sailor said she has her “car in sixth gear, and I have my gas pedal on the ground – and I am ready to go. I am ready to go full-speed ahead,” she said of the relationship.

“We’re in the ride-or-die stage right now,” laughed Mr Pankey, adding he planned on “just riding off into the sunset … we’re 65 years old. We ain’t got time to be messing around.”

The love story is a heartwarming, full-circle conclusion to a tale that began with tragedy.

Ms Sailor, at 21, was living in a basement apartment off-campus in September 1978 and had placed a newspaper add for a roommate on the 13th.

After shopping for groceries, she returned home and was “doing all the silly stuff you do when you’re all by yourself,” she says in the film short Betsy & Irv. “I was singing loudly and dancing with the refrigerator door, and being very much myself.”

In the course of that, however, she realised she had a quiz the next morning and headed back into her bedroom to study.

“The light didn’t work,” she says. “The very next thing, I had a hand over my mouth and a knife in my neck and a person saying to me, ‘If you make a sound, I will kill you.’

“He put his hands around my arms and dragged me towards another bedroom, threw me down on the bed face-first,” she says in the film. “He is tying my hands behind my back; he also tied a scarf, blindfolded me. I remember asking him at one point, ‘What are you going to do?’

“He simply stated, very matter-of-factly: ‘I’m going to rape you’” – and proceeded to attack her for about two hours, she says.

“I made a calculated decision, on more than one occasion, that I was not going to try to escape,” she says in the film. “I was too afraid that he was going to kill me.”

When he finally stopped and she determined that he’d left, Ms Sailor – who’d been actively trying to commit the smallest details to memory about her assailant – freed herself of the restraints, called authorities and her mother, who lived a few hours away.

“I called my mother and … I didn’t want to use the words, ‘rape,’” Ms Sailor says in Betsy & Irv, tearing up more than four decades later. “Because I thought, ‘That’s just too big of a word, too emotionally charged.’ And I … [didn’t want] my mother to hear that.’”

About a month later, player Todd Hodne – a Penn State player originally from Long Island and a stranger to Ms Sailor – was arrested “on the strength of three fingerprints and a traced phone call” to another victim, according to Ms Lavigne and Mr Junod’s piece, Untold.

“Five months later – two months after Penn State and Paterno lost the national championship game to Alabama and Bear Bryant – Hodne was found guilty of criminal sexual assault after one of his victims testified against him.”

That was Ms Sailor – whose testimony before the courts and the school not only got Hodne kicked out of Penn State but also destined for prison. (While inexplicably out on bail, before serving any significant time, Hodne went on to assault more women in his native New York.)

When Ms Sailor spoke out against Hodne in court, many of his football teammates were present. One truly heard her.

“She was bold enough to stand and get up there and speak on her behalf at a time where, on any college campus, women weren’t reporting rapes,” Mr Pankey says in Betsy & Irv. “Women were vilified – ‘Look what she was wearing, look how she was acting, she shouldn’t have been at the party drinking.’

“When Betsy testified, I thought that took a hell of a lot of courage and self-fortitude to be able to do that.”

So he decided to take the curly-haired student under his wing. He turned up at the door of her dorm room, since she’d moved on campus after the traumatic attack.

“He put out his hand … [and said] ‘Hello, my name is Irv Pankey,’” Ms Sailor says in the documentary. “I just wanted to let you know that I was in the court, and I listened to what you had to say, and I believe every word that you’ve said. You will never have to be afraid or be alone again; I will be by your side.’”

The unlikely pair began palling around at Penn State; Mr Pankey says in the film: “Something bad had already happened to her that kind of set her apart. I just didn’t want her to feel that someone didn’t care.

“That was my main goal … to try to let her know, ‘This ain’t a football thing.’ It was a Todd thing. And that she was okay with us.”

And there was clearly a “Todd thing”: in advance of one of the player’s parole hearings years later, John B Collins, who prosecuted one of Hodne’s crimes, sent a letter to the parole board.

“I have been a prosecutor for nearly 30 years,” it read, according to Untold. “I have prosecuted serial killers and capital cases. Todd Hodne, to this day, remains among the three most dangerous, physically imposing and ruthless excuses for a human being I have ever faced in court.”

The extent of that ruthlessness wasn’t widely known yet, however, as Ms Sailor finished out her time at Penn State, where the football team was becoming more of a legend than a group of athletes. Mr Pankey’s unconditional and unprompted support was invaluable, she says.

“He gave me a bit of freedom that I wouldn’t have had otherwise,” she says in Betsy & Irv. “He would have the occasional get-together at his house, and I was invited; everybody knew who I was. I don’t know if Irv had a talking to them or whatever, but there was an understanding there.

“I felt a bit of respect, and the respect came from, I believe, a woman that was taking on something quite large. And the majority of people that I was dealing with were Black football players that had certainly been up against battling big things in their lives.”

Forty years later, many of those battles continue – but Ms Sailor and Mr Pankey hope their story will inspire others to be aware, empathetic, and, of course, kind.

“If it causes somebody else to reach a hand out and help somebody, hey, can’t nothing be any better than that,” Mr Pankey told Ms Lavigne in their recent interview. “I guess, in the grand scheme of things, it’s just a gesture of kindness.

“I think we’re kind of missing that a little bit in this country today.”