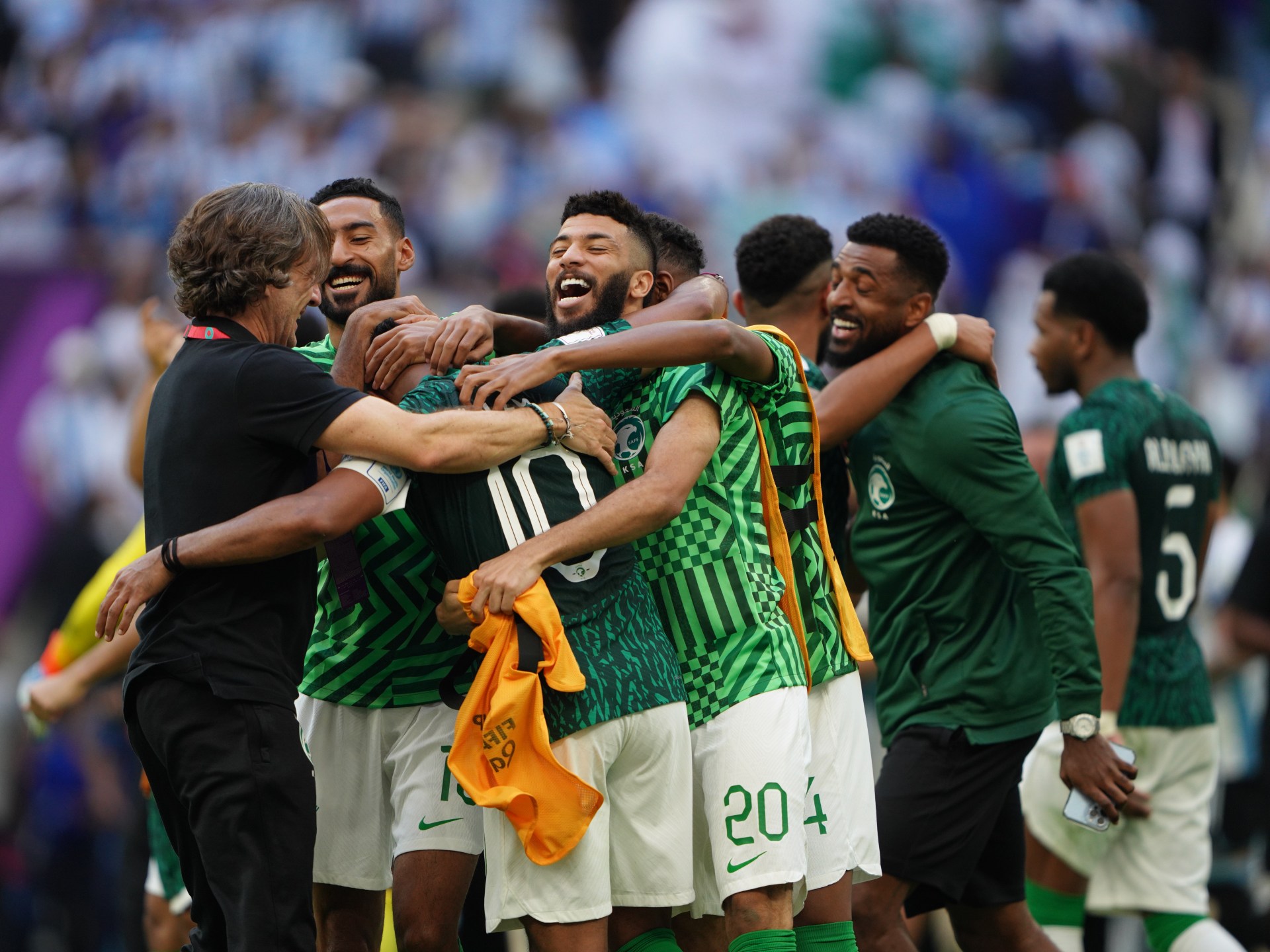 In the first upset of the 2022 World Cup, Saudi Arabia take down the two-time champions 2-1.

Saudi Arabia have shocked Argentina with two second-half goals to beat one of the pre-tournament favourites in their opening World Cup match, marking the first upset of the 2022 edition of the sport’s biggest event.

It all seemed to be going to plan for the Argentines on Tuesday after their captain and talisman Lionel Messi slotted in a penalty 10 minutes after Saud Abdulhamid hauled down Leandro Paredes in the box.

Argentina then attacked with ferocity as Saudi Arabia struggled to contain them. Messi had the ball in the back of the net not long after his first, only for the goal to be ruled offside.

Another offside goal followed after Lautaro Martinez dinked the ball over Saudi keeper Mohammed Al-Owais with a cool finish. He reeled away towards the Argentina fans, who had been in fine voice, only for VAR to turn down the goal because of a marginal offside.

A game of two halves

In the second half, a reinvigorated Saudi team took the field. Saleh Al-Shehri opened their scoring in the 48th minute after latching onto a long ball before guiding a shot through Argentine goalkeeper Damián Martinez’s legs and into the far corner.

The Saudi fans went into raptures as they celebrated a goal, which at the time seemed to go against the run of play. But more was to come.

A few minutes later, winger Salem al-Dawsari cut inside and curled a beauty into the top corner of the goal. If the first half had belonged to Argentina, it was Saudi Arabia’s moment to shine in the second as their fans celebrated in excitement — and possibly some disbelief — at Lusail Stadium.

Argentina tried their best to draw level, but some resolute defending and a string of fine saves from the Saudi keeper stopped them from scoring.

Messi — who has won every other major trophy he has competed for, other than the World Cup — cut a forlorn figure towards the end as he struggled to pull Argentina back into the match. He uncharacteristically guided a close-range header into the palms of Al-Owais in the final minutes, a miss that in many ways was emblematic of Argentina’s performance on the day.

There was more drama left, though. Five minutes into stoppage time, Al-Owais charged out of goal and accidentally kneed al-Dawsari, who received lengthy treatment for his knock before being stretchered off.

Saudi Arabia had never beaten Argentina in their previous four encounters. Their win over the pre-game favourites sparked wild celebrations in the stadium and all around Doha. It was also the first victory for a Middle Eastern side at the World Cup, which the region had never hosted before. Host Qatar lost to Ecuador on Sunday, and Iran were defeated by England on Monday.

Mexico and Poland are the other teams apart from Argentina and Saudi Arabia in Group C. Argentina were the odds-on favourites to move to the next stage at the top of the group. Now they’ll have to fight for that – while Saudi Arabia bask in the glory of their biggest football win ever.

Why the AP called the Arizona Senate race for Mark Kelly