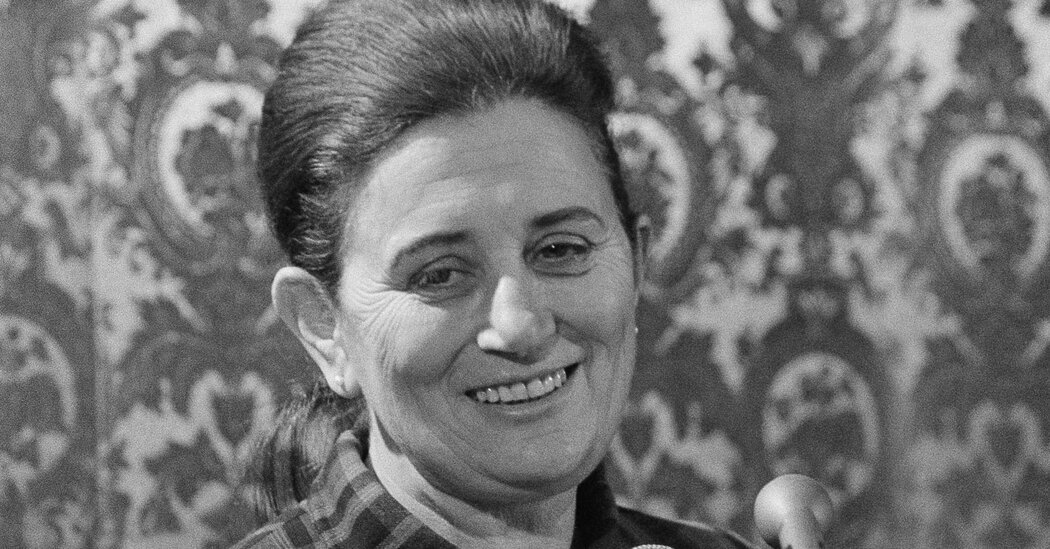 Ms. Dayan was Israel’s first “activist designer,” said Neri Oxman, the provocative architect, inventor and M.I.T. professor. Ms. Oxman, who is in her 40s, grew up in Haifa surrounded by Maskit objects, like so many in her generation.

“It was through design that she practiced social entrepreneurship,” Ms. Oxman said of Ms. Dayan. “Her taste for fusing tradition with high modernism was embodied not only in Maskit’s objects, but in the company’s culture.”

“I am not a ‘do-gooder,’” Ms. Dayan wrote in her book. “It is true that I try to help individuals, whether Arabs or Jews. But this is because I like to help people; perhaps it is a way of helping myself. When it comes to politics, I know perfectly well that problems can’t be solved through good deeds — and it is clear each of us must help himself.”

Ruth Schwarz was born in Haifa on March 6, 1917. Her Russian-born parents, Rachel Klimker and Zwi Schwarz, were socialist activists and intellectuals who had signed a pact in high school to devote themselves to their new country’s service.

Ruth grew up in London, where her parents had moved to study at a university — her father political science and rabbinical studies, though he was an atheist; her mother chemistry and education. Ruth returned to Palestine when she was 9. Her father worked as a lecturer and her mother taught kindergarten.

Fired up by the socialist ideals of the scout organization she had joined, Ruth dropped out of high school to learn farm skills at an agricultural school in Nahalal. There, she met Mr. Dayan. She was just 17 and Moshe was 19 when they fell in love.

She thought marriage was bourgeois; he thought it “led to complications.” But they married anyway, after first securing Moshe a divorce from a German refugee named Wilhelmina, a marriage that Ruth had forced him into: Palestinian Jewish young men of the time often married Europeans to secure them a Palestinian passport.

Johnson & Johnson says vaccines for children could be available by September

Xbox Game Pass is full of sports games this month

‘Age of impunity’: What years of attacks on Syria hospitals mean for the world

On Tuesday, Virgin Voyages said in an online announcement to booked guests that as it “continues to navigate what’s going on

Royal Caribbean to Sail From Israel With Guests and Crew Vaccinated

Photography via Tate McRaeShe may be killing it with the Gen Z crowd on TikTok, but McRae’s mature songs about

From all things yellow to the enduring bike shorts, here are the top styles we’re looking forward to wearing all