Russia appeared on the brink of averting a widely anticipated debt default on Friday after claiming it had made two overdue dollar bond payments previously blocked by western sanctions, despite what the central bank governor described as “a zone of colossal uncertainty” in the economy.

In the latest twist to the saga over whether Russia will renege on its debts for the first time since 1998, the country’s finance ministry said the two payments — totalling $649mn and originally due on April 4 — had been sent to Citigroup in dollars, the paying agent responsible for distributing cash to bondholders.

“The finance ministry has the resources and from an economic point of view there can be no talk of any default,” said Elvira Nabiullina, head of the central bank. “But we are witnessing difficulties with payments,” added Nabiullina, who was recently appointed to a third term in the role.

After US authorities earlier this month stopped American banks from processing the payments, Russia said it would instead use roubles, which is not permitted by the terms of the bonds. Moscow then claimed it had fulfilled its obligations and threatened to take legal action if sanctions forced it into default.

Friday’s statement suggests a change of tack that could dodge default if investors get their dollars before a 30-day grace period that expires on May 4. Citigroup declined to comment.

“It looks like there’s no default, for now,” said one bond investor.

A US official said the debt payments announced on Friday were made using dollars that were in Russia, and not immobilised funds in the US, meaning they would no longer be available for Moscow to keep funding the war in Ukraine. The transaction was not specifically authorised by the US, but was allowed under a carve-out for such payments put in place as part of the sanctions regime. 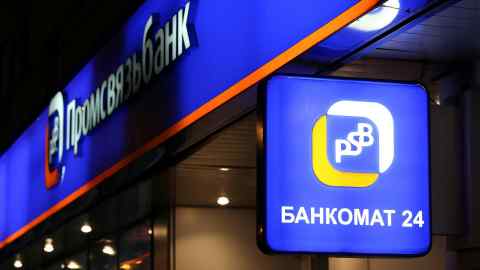 The use of scarce dollars for debt repayments marks a “meaningful win” for US authorities, said Paul McNamara, an emerging market bond fund manager at GAM. “It also implies that Russia is making provision for something other than an indefinite freeze of external financial relations.”

Even if the late payments arrive before the grace period ends on Wednesday, it is still unclear how Russia will go on servicing its foreign debt beyond May 25, when an exemption in US sanctions that allows US investors to receive Russian interest payments is due to expire.

Also on Friday, Russia’s central bank cut interest rates by 3 percentage points to 14 per cent. The central bank said yearly inflation rose to 17.6 per cent in April and would reach 18-23 per cent in 2022. It expects the economy to contract 8 to 10 per cent this year.

Nabiullina said “transitory” high inflation was an “inevitable” part of a “structural transformation” of the economy after sanctions cut Russia off from global markets.

“That’s why we’re not trying to bring inflation back to the target at any cost,” she said. “Overly squeezed demand would freeze the structural transformation. And then we’d have an economy where prices are growing slowly, but the assortment of goods and services would be all the more limited and some essential goods would be totally unavailable,” she said.