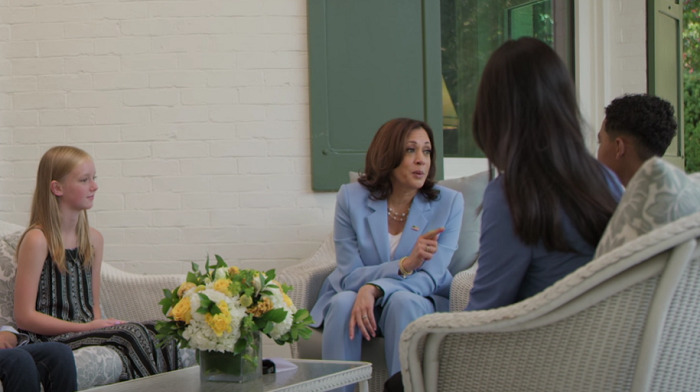 The series that features Harris, who was named as chair of the cabinet-level National Space Council in May, is designed to pique the curiosity of children regarding space exploration.

It has been described by SpaceRef as a “once-in-a-lifetime event” that “follows a group of lucky kids as they meet Vice President Kamala Harris.”

The children engage in a scavenger hunt with clues delivered by NASA astronaut Shane Kimbrough from the International Space Station. They do so while the group visits the United States Naval Observatory.

The lucky kids, however – five of them – aren’t just random school children chosen to be the “lucky” ones.

Instead, they are child actors, according to KSBW TV, “who auditioned for their spots.”

Vice President Kamala Harris struggles with authenticity issues amongst her critics, and using child actors for a YouTube series meant to convey genuine excitement with space exploration isn’t going to temper that in the least.

One of the teens featured in the video, Trevor Bernardino, explained to a local news outlet that he had to submit a “monologue” and was interviewed for the part.

“Then after that, like a week later my agent called me and was like ‘Hey Trevor, you booked it,’” he said.

If the White House was trying to create the illusion that Harris is somehow relatable by putting her with kids in a children’s video, neither she nor the child actors are doing a very good job.

The video, described by the New York Post as “bizarre,” features a “spaced-out” Harris taking in an over-the-top, exuberant tone to the child actors.

“You guys are gonna see, you’re gonna literally see the craters on the moon with your own eyes!” she excitedly told the children, pointing to her own eyes as if the group in front of her consists of kindergarteners.

Joanne Mason jokingly described the video as seeming more like “a trailer from a movie where the fun and engaging teacher is secretly a serial killer who collects the heads of the children she takes to Space Camp.”

That video of Kamala Harris doesn’t just come across as a parody, it comes across as a trailer from a movie where the fun and engaging teacher is secretly a serial killer who collects the heads of the children she takes to Space Camp.

RELATED: Biden’s Approval Craters In Battleground Iowa – Could Midterms Be A Bloodbath?

Kamala Harris using child actors for her YouTube series comes as the White House is already struggling with authenticity issues.

As The Political Insider reported last week, President Biden and his handlers have been using a fake White House set for certain events, like his recent promotion of COVID booster shots.

Why does Joe Biden feel the need to use a Fake White House set across the street from the actual White House? pic.twitter.com/5p7TLwoPmw

The President has been roundly mocked for using the fake set, with social media users posting images of wide shots that show the faux-White House set.

The set features windows that appear to be projected images of the Rose Garden – in full bloom in October – to lend authenticity.

Perhaps it’s actually Harris and Biden who are the biggest actors in all of this, both feigning concern over our troops in Afghanistan and the crisis at the border while engaging in fake sets and YouTube video buffoonery.

According to the Washington Examiner, the “Get Curious” videos were shot between August 11th and the 13th, just as the Taliban was launching its final offensive in Afghanistan.

Harris, who has been tapped as Biden’s border czar, was also apparently more focused on space videos than the record number of migrants who were surging the border during that same timeframe.