Renault is selling its entire Russian operation including its stake in Lada-maker Avtovaz for 2 roubles, in one of the most significant retreats by a foreign company since the invasion of Ukraine.

The French group’s exit, which involves a €2.2bn writedown and the sale of its businesses in Russia to a state-backed group and to the City of Moscow, highlights the lack of options for businesses trying to leave the country without huge losses on their investments.

Chief executive Luca de Meo told the FT last week that the decision to leave Russia had been “painful”, but that the company was “forced to decide” because it was unable to build cars in the country.

Renault employed 45,000 people in Russia, mainly at Avtovaz’s vast Togliatti factory on the banks of the Volga river. It was more exposed than its rivals to the country and a lack of parts had already brought operations to a halt.

De Meo told the FT Future of the Car Summit last week that the business was “looking at a solution that will allow [people] to keep their jobs into the future”.

The deal involves transferring the company’s entire stake in its Renault Russia operations to the City of Moscow and its 67.69 per cent holding in Avtovaz to NAMI, a state-backed car research institute.

The sale, which also gives Renault a six-year buyback option on the businesses, was sealed for one rouble per stake, according to a person with knowledge of the deal. At current exchange rates, there are 64 roubles to the dollar.

Renault is 15 per cent owned by the French state. If the company had not exited Russia, “its sales [there] would have collapsed and it would have been facing massive losses for an undetermined period of time”, France’s economy ministry said.

Russia made up about 10 per cent of Renault’s sales and half its operating margin.

International businesses from oil companies to banks have been trying to find a way out of Russia, with many simply suspending operations for now. That approach can leave them with employee wage bills to pay but little or no revenues in the country. At the same time, buyers are scarce and dealing with sanctions-hit Russian entities also poses problems. 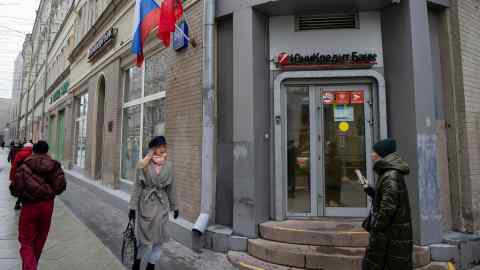 The UK’s Shell last week agreed to sell its retail and lubricants businesses in Russia to Lukoil, the first big deal in the oil and gas sector. French bank Société Générale has notched up a €3.1bn writedown by selling its Rosbank network to a group controlled by oligarch Vladimir Potanin.

McDonald’s said on Monday it would sell out of Russia and wanted to find a local buyer to hire its employees.

Renault’s Russia venture was part of its strategy of expanding in emerging markets. Its first investment in the country in 2007 was encouraged by Vladimir Putin.

It spent years modernising some of Avtovaz’s Soviet-era facilities and improving operations, and until the war had been hoping to expand exports of new Lada models.

Russia is set to revive production of Moskvitch vehicles — a Soviet-era car brand dating back to 1946 — to keep jobs going at the Renault plant, Moscow mayor Sergei Sobyanin said in a blog. They will be produced together with Russian truck manufacturer Kamaz, with help from the government to find and make parts, Sobyanin said.

Renault’s Russia exit comes as the company races to invest in electric vehicles as manufacturers position themselves to produce lower-emission cars.

The company had already reduced its operating margin outlook for 2022 to 3 per cent from 4 per cent and it stuck by its financial guidance on Monday.

Loan demand is bouncing back after 2 yrs of credit contraction: SBI chief