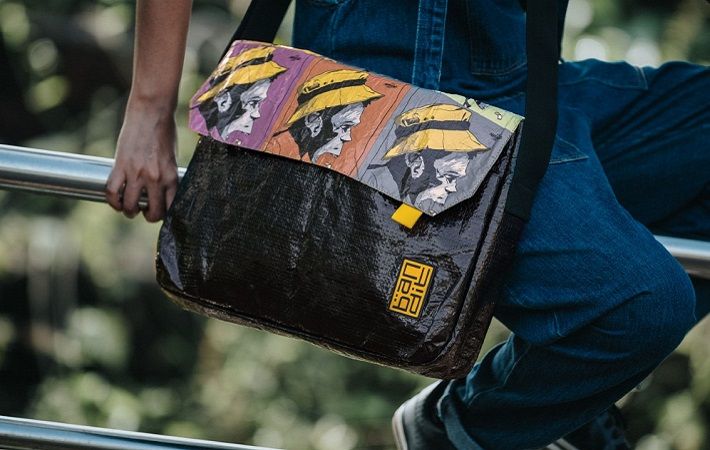 The Shourai Collection, which literally means ‘The Future’, revealed how new designs and materials will be the mainstay of the future – in complete sync with R|Elan being the fabric of the future.

Vetoskar used his trademark tarpaulin and added billboard flex, used canvas and car seat belts to turn them into fashion items for the collection, the company said in a media release.

Colour was brought in with practical use when the duffels, backpacks and cross body bags zipped through the show. A stylish raincoat was added to complete the look of the colourful abstract printed line that merged cleverly to show the many ways of moving on the sustainable path.

“Pushing his creativity to the ultimate limits, Satyajit unveiled his pride and jewel in the crown – a jewellery collection, dreamt up from aircraft aluminium. The jewellery line also used unconventional aluminium and copper but combined them with rich gold and diamonds,” the release said.

The designer also introduced fountain pens created from aircraft aluminium, brass and even artillery shells as well as wood from handloom spindle.

Vetoskar also showcased a film that was not just about the future of sustainable design, but about youth and their very alternative aspirations. The film showcases a day in the life of skateboarders – their trials, triumphs and zeal to better their craft.

Bandit is a young, urban, street brand and Goa being its home, it aimed to highlight a different and inconspicuous side of Goa.

So, You’re Going Back Into the Office—15 Cool Outfits to Spice Up Your Rotation