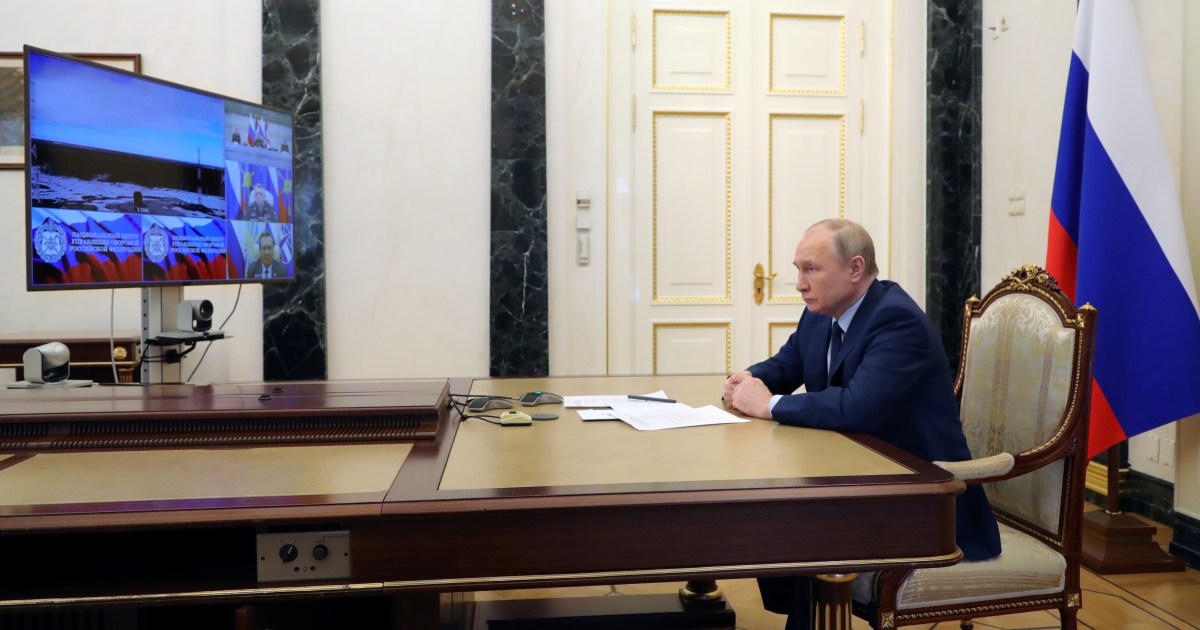 The Russian missile, capable of carrying nuclear warheads and evading radar, was tested in April amid heightened tensions.

Russian President Vladimir Putin has said Moscow will further strengthen and modernise its armed forces, including deploying its newly tested Sarmat intercontinental ballistic missiles (ICBM) by the end of 2022.

Putin made the comments on Tuesday in a televised meeting with military academy graduates amid Russia’s ongoing invasion of Ukraine.

“It is planned that by the end of the year, the first such complex will be on combat duty,” Putin told the graduates, referring to the Russian-developed ICBMs that are capable of carrying 10 or more nuclear warheads and decoys.

Russia successfully tested the missile in April, unnerving some observers at a time of heightened tensions that has again raised the prospect of nuclear confrontation with the West.

The deployment will come as part of a larger build-up of Russia’s military, Putin said, adding that troops have already begun to receive S-500 air defence and missile defence systems “that have no match in the world”.

Russia has been revamping its air defence systems with the S-500s, which can be rapidly deployed and can intercept at long range aircraft, hypersonic missiles and ICBMs.

“We will continue to develop and strengthen our armed forces, taking into account potential military threats and risks,” said Putin, who praised Russian forces fighting in Ukraine as acting “with courage, professionalism, like real heroes”.

While Western officials had previously said they expected the Sarmat to be deployed by the end of the year, its introduction would represent a major challenge to security.

The missile, which has been under development by Russia for years, has a massive payload and extreme range, making it likely able bypass most radar and missile defence systems.

The Russian president had previously praised the Sarmat missile as a “truly unique weapon” that will ensure his country’s security from external “threats”.

He has said it would make those who try to “threaten” Russia in the heat of aggressive rhetoric “think twice”.

In April, then Pentagon spokesman John Kirby downplayed the significance of the missile test, saying Moscow “properly notified” Washington beforehand, as is obligated to do under the 2011 New START Treaty, which placed limits on the two countries’ nuclear weapons.

“Testing is routine and it was not a surprise,” Kirby told reporters. “Of course, the department remains focused on Russia’s unlawful and unprovoked aggression against Ukraine.”

Kremlin spokesman Dmitry Peskov has previously said that Russia would only use nuclear weapons if its very existence were threatened.

Lebanon warns against any Israeli ‘aggression’ in disputed waters