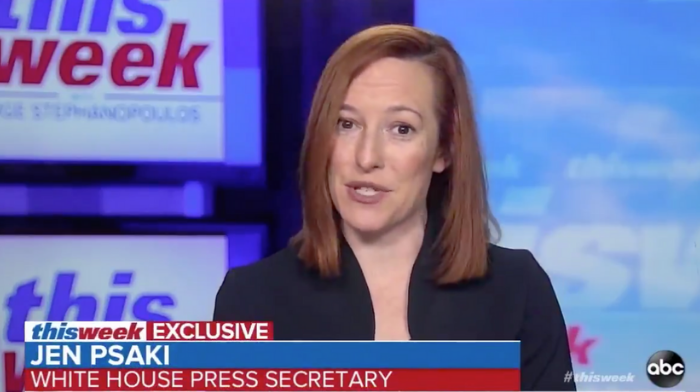 On Sunday, White House Press Secretary Jen Psaki refused to answer if her boss, President Joe Biden, still believed Democratic New York Gov. Andrew Cuomo was “the gold standard for leadership during the pandemic,” a comment the president made earlier in 2020.

The question came from ABC News’ “This Week” with Jon Karl.

Psaki’s response has drawn ridicule from conservative commentators, as Cuomo draws fire even from far-left figures like Alexandria Ocasio-Cortez and other New York Democrats.

RELATED: Ghislaine Maxwell Allegedly Refused To Assist In Finding Clinton Tapes Because She Feared They Might Hurt Hillary’s 2016 Run

Cuomo is under heavy fire at the moment for implementing a policy early in the COVID-19 pandemic that forced nursing homes to accept people who had tested positive for coronavirus.

It has since been alleged that the governor and his administration tried to hide data that indicated the actual number of nursing home deaths.

“So does President Biden still consider Andrew Cuomo the gold standard when it comes to leadership on the pandemic?”

Everything the left accused Trump of…

…turns out to be everything #AndrewCuomo actually is.

“He’s also chair of the NGA, so he plays an important role in ensuring that we’re coordinating closely and getting assistance out to people of his state and to states across the country,” Psaki added. “And we’ll continue to do that.”

“Of course, there will be a process,” she continued. “Investigations, we’ll leave that to others to determine … how that path is going to move as we look forward.”

Karl pressed on, “But Jen, my question was, does President Biden still believe that Andrew Cuomo represents the gold standard on leadership during this pandemic? Just a yes or no.”

A “yes or a no” was not forthcoming.

Asked about Biden once calling Gov. Cuomo’s pandemic response the “gold standard,” Jen Psaki tells Jon Karl the president is focused on his response and will leave investigations to the appropriate authorities. “I’m not here to give new labels or names,” she says.

RELATED: Ann Coulter Pays Touching Tribute To ‘Hilarious’ Rush Limbaugh – He Taught Us To ‘Forge Our Own Path’

“Jon, the president, well, it doesn’t always have to be a yes or no answer, Jon,” Psaki said. “I think the president is focused on his goal, his objectives as president of the United States.”

Psaki insisted that she’s “not here to give new labels or names from the president,” but “to communicate with you about what our focuses are and what his objectives are as president.”

Former Georgia Sen. Perdue Will Not Challenge Raphael Warnock In 2022

Dem Rep. Raskin Warns That Trump ‘Remains A Clear And Present Danger To The American People’

Bears tightened their grip on the markets on Friday amid a global equity market rout. Benchmark indices tumbled over 3

‘Welcome Insurrectionists’ sign to be flown over CPAC by protester

Last year was weird, but I have high hopes that 2021 will be at least a little better than its predecessor.