The head of the US PGA Tour has blasted a rival Saudi Arabia-funded golf series for attempting to “buy the game of golf”, as an increasing number of circuit members defect to the new project fronted by former star player Greg Norman, escalating the battle for the future of the sport.

Jay Monahan, commissioner of the PGA Tour, said that LIV Golf, which is majority-owned by Saudi’s $620bn sovereign wealth fund, was “not concerned with the return on investment or true growth of the game”.

“I am not naive,” said Monahan. “If this is an arms race and if the only weapons are dollar bills, the PGA Tour can’t compete with a foreign monarchy spending billions of dollars trying to buy the game of golf.”

Saudi’s Public Investment Fund has earmarked at least $2bn to invest in LIV, threatening the PGA Tour’s position as one of the dominant forces in the sport by paying lucrative fees to draw away some of the game’s biggest stars, including Phil Mickelson, Dustin Johnson and Bryson DeChambeau.

The PGA Tour is increasing its own prize money and rewards for golfers. It has already suspended more than 17 of its members who took part in the inaugural LIV tournament in London two weeks ago. Two of the future LIV gatherings will happen at golf clubs operated by former US president Donald Trump.

The London event was the first of eight so-called invitational tournaments which will offer a total prize purse of $250mn. 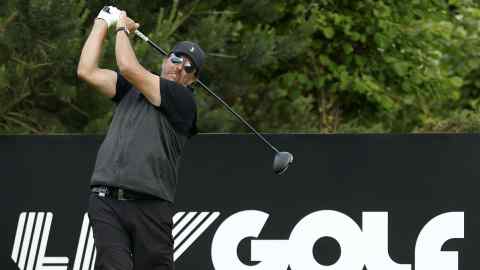 Critics have rounded on LIV players for signing up to a competition backed by PIF because of Saudi Arabia’s poor record on human rights, the murder of journalist Jamal Khashoggi in 2018 and its military operations in Yemen.

Through the course of the spring, the tour has dismissed suggestions that LIV was gaining any momentum, but has still suffered a steady flow of departures. LIV revealed on Thursday that it had signed former world number one Brooks Koepka, a defection that has stung the PGA Tour because of the stature of the four-times major winner and his previous indications of loyalty.

Confirmation of Koepka’s move came as Monahan set out plans to increase the average prize money on offer at eight top events in 2023 to $20mn — a total increase to $160mn from $106mn.

The bigger pot, together with calendar and format changes, are designed to strengthen the appeal of the PGA Tour as it fights to retain players being courted by LIV.

“Our members compete for the opportunity to add their names to history books, and, yes, significant financial benefits, without having to wrestle with any sort of moral ambiguity,” said Monahan.

LIV said: “The Tour today has made the case for LIV Golf. They have underpaid players for years, failed to innovate and today confirmed that LIV’s format is better. We welcome the announcement, which proves competition can grow the game and benefit golfers, all the while improving the experience for fans — which is exactly what LIV is doing.

“Instead of banning players, the Tour should now work on coexisting with us. After all, we’re just getting started.”

Inflation: Your soap or cookies may not be getting pricier but lighter

Crowded Ukraine shopping mall with more than 1,000 people inside hit by missile strike

A Russian missile strike has hit a crowded shopping centre in the central Ukrainian city of Kremenchuk, President Volodymyr Zelensky