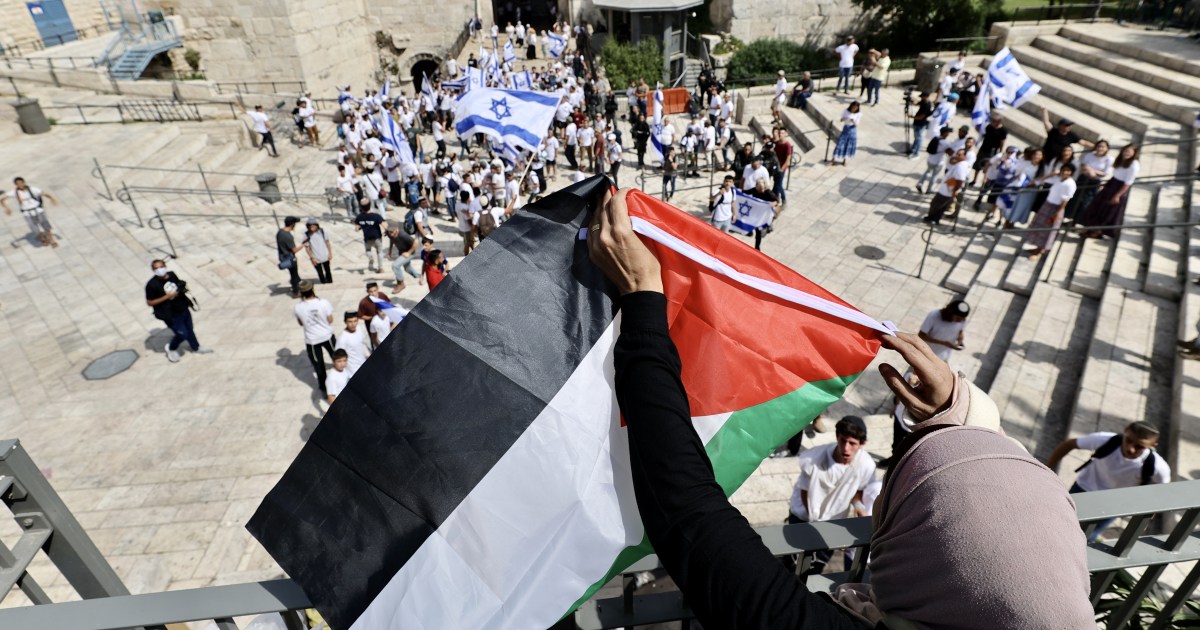 Tens of thousands of flag-waving, ultranationalist Israelis raided the Muslim quarter of the Old City on Sunday during the so-called “flag march”. The provocative march that took place in and around the Al-Aqsa Mosque compound is meant to celebrate the occupation and subsequent annexation of East Jerusalem in 1967 – a move that has not been recognised by the international community.

Some chanted racist slogans including “Death to Arabs” and attacked Palestinian residents while backed by armed Israeli forces.

Some Jewish groups also stormed the Al-Aqsa compound raising fears among Palestinians that it was an attempt to change the status quo at Islam’s third holiest site. Jewish prayers are prohibited at the 35-acre (14-hectare) compound known to Muslims as al-Haram al-Sharif, or the Noble Sanctuary. Jews call it the Temple Mount.

“Israel yesterday has crossed all red lines and international treaties with its repeated aggression against Al-Aqsa in Jerusalem. It attempts to impose a reality that doesn’t align with the historical status quo of Al-Aqsa mosque,” Shtayyeh said on Monday.

Dozens of Palestinians were arrested across occupied East Jerusalem and the occupied West Bank a day earlier, where protests to decry the march erupted, while more than 165 suffered injuries ranging from heavy tear gas inhalation to beatings and wounds from live rounds, as well as rubber-coated steel bullets.

Following the march, large groups of Israelis stormed through Palestinian neighbourhoods, assaulting residents as well as their property.

Nida Ibrahim, reporting from the West Bank city of Ramallah, said the Shattyeh has been issuing statements “since yesterday”.

“He had strong statements today saying that Israel needed more than 3,000 Israeli army and police officers to secure the city,” Ibrahim said.

“He said there’s a difference between occupying the city militarily and being the occupying power – and actually having sovereignty [over it].”

Some 70,000 Israelis were reported to have joined the annual march, which is seen as a bid by Israel to impose control over the occupied part of the city.

According to Ibrahim, Palestinians “on the street” said that these statements are not enough and expect more from their leadership.

“The Palestinian Authority has been saying it’s committed to a peaceful resolution … on the streets, Palestinians have been saying Israel cementing its occupation,” she said.

Israel has been advancing its illegal settlement project on occupied Palestinian lands. Settlements are fortified, Jewish-only housing complexes built on Palestinian land in violation of international law. At least 600,000 settlers live in settlements across the occupied West Bank and East Jerusalem.

Meanwhile, in the West Bank city of Hebron, Israeli settlers resumed their march on Monday.

“We know settlers in Hebron in the south of the occupied West Bank have marched through the old part of the city,” Al Jazeera’s Ibrahim said.

Settlers “continued marching with their flags, with their racist slogans” towards the Ibrahimi mosque, she said, adding that settlers “invaded the squares of the mosque” while under the protection of the Israeli army.

According to her, Palestinian journalists who were attempting to document what was happening were prevented from doing so.

Wafa news agency reported that settlers also marched with Israeli flags at a military checkpoint near Nablus and Jenin in the northern West Bank while a secondary school in the Palestinian village of Urif also came under attack, it said.

The Palestinian news agency quoted the principal as saying that the settlers arrived with the army’s protection. They threw rocks at the school which resulted in some damage, while soldiers fired tear gas canisters causing “many suffocation cases”, it added.

Settler attacks on Palestinians and their property have been rife across the West Bank and East Jerusalem. The situation in Hebron’s old city is particularly volatile, as some 700 Israeli settlers live among a Palestinian population of nearly 40,000.

‘He lit the flame’: Jan 6 hearing uses Ivanka, Kushner, Barr and violent video to paint Trump as insurrectionist in chief