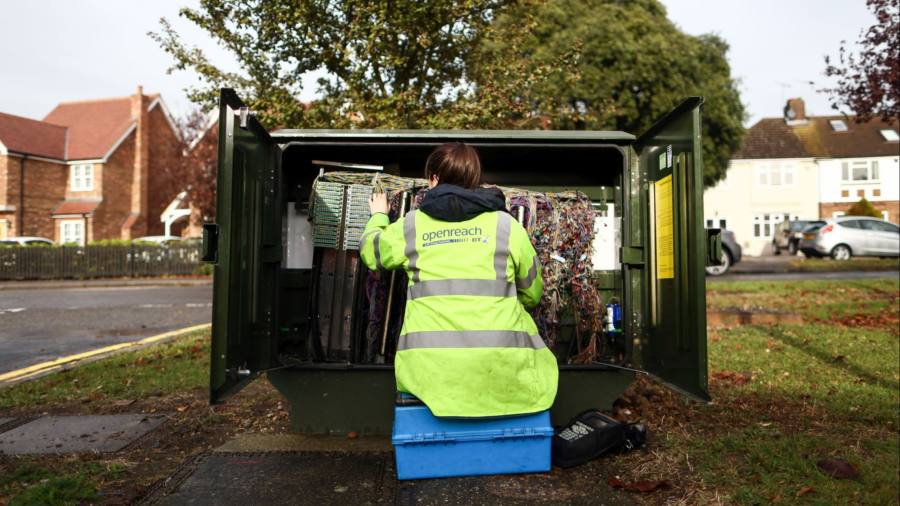 Openreach is to limit its investment in the rollout of ultrafast fibre broadband as BT’s networking division seeks to curb costs and get “bang for its buck” with UK inflation running at its highest level in four decades.

The group has contacted suppliers to say that it will build its fibre broadband network “narrower and deeper” and “tighten the timing of investment” to a just-in-time approach, not committing capital to projects further than six months out, according to a letter seen by the FT.

“This will by necessity include an element of cancellation or suspension of a job you have received and/or validated”, the company wrote. “It is clear that there will be a financial impact to you as we implement these plans.”

The move comes a few weeks after Philip Jansen, BT’s chief executive, announced the telecoms group would raise its cost-cutting target from £2.5bn to £3bn by the end of 2025 because “inflation is pushing us hard”.

“Everyone is going to have to share the pain on cost savings,” he said as BT announced quarterly results, pointing to a £200mn increase in the company’s energy bill this year.

Limiting the extent to which Openreach expands its fibre footprint could help competitors including Virgin Media O2 and other alternative networks — or “altnets” — that are racing to lay fibre across the UK and attract customers.

Over a hundred altnets have received billions in backing from private investors to lay fibre to millions of homes, with the success of many of their business models predicated on them reaching regions before Openreach.

Clive Selley, chief executive of Openreach, said BT would be focusing on completing fibre networks in areas that are partially complete rather than breaking new ground, when asked by the FT about the message to contractors.

He added this would not affect Openreach’s target of reaching 25mn homes with full fibre by 2026, which is expected to cost it £12bn.

Meanwhile, rival Virgin Media O2 plans to upgrade its network to fibre by 2028. It has formed a joint venture between its owners, Telefónica and Liberty Global, as well as infrastructure fund Infravia, to lay fibre for up to 7mn new premises.

“Getting bang for our buck is what this is about,” said Selley, noting that Openreach has now passed 9mn homes with full fibre and has partially built the network to a further 6mn homes. Openreach would mainly be suspending work on surveys and estimates for future work beyond these 15mn, he added.

The new strategy follows consultations with some of Openreach’s biggest wholesale corporate customers about reducing some of its pricing to make it more attractive and to help them move customers from copper to full fibre.

However, the proposed shake-up has sparked a backlash from competitors who claim it is an attempt to undercut rivals who could also sell broadband to internet companies such as Sky, Vodafone and TalkTalk.

Malcolm Corbett, chief executive of the Independent Networks Co-operative Association (Inca), said that operators and the investors behind them are “getting quite concerned”.

“It is not surprising behaviour from an incumbent monopoly, but we are getting the sense that there’s a stitch-up going on behind the scenes,” he added. Inca and its members have asked the regulator Ofcom to look at the potential impact of the proposed new pricing on competition in the market.

Boy, 5, in critical condition after 8-year-old family friend shoots him

England storm past Senegal to set up France showdown