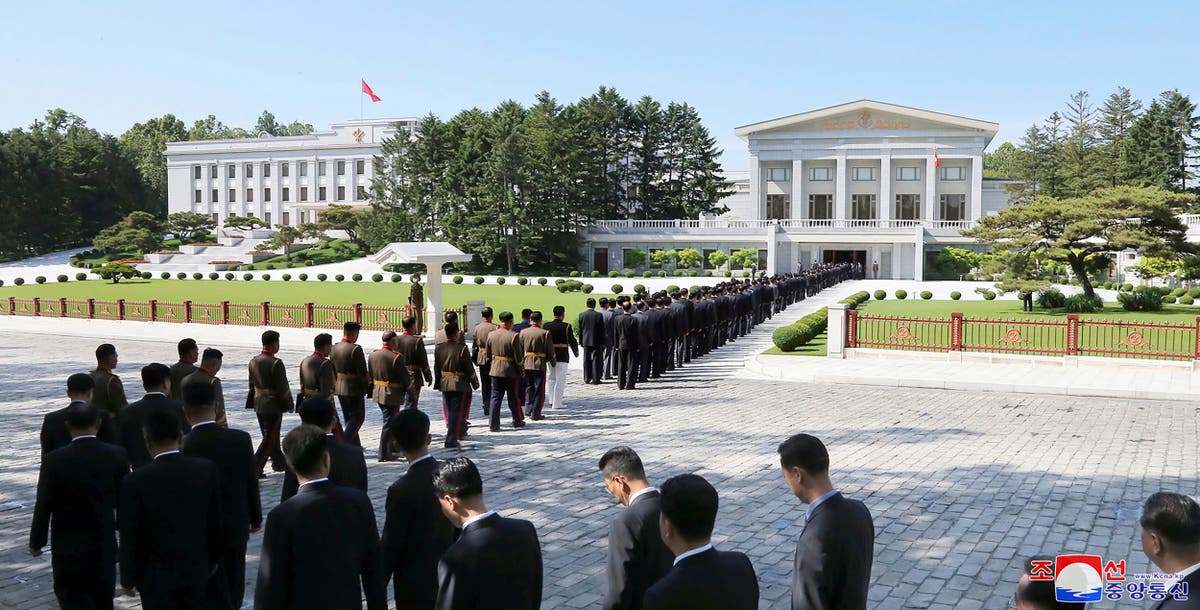 North Korean leader Kim Jong Un has convened a political conference where he’s expected to review state affairs, including a COVID-19 outbreak, and possibly address relations with Washington and Seoul amid his revived nuclear brinkmanship.

The meeting comes amid signs North Korea is preparing for its first nuclear test explosion in nearly five years, which would further escalate a provocative streak in weapons demonstrations this year that has included multiple tests of intercontinental ballistic missiles.

KCNA published photos of the meeting’s participants walking into a party building and said they approved of the agenda that would be discussed, which wasn’t specified.

State media previously said the meeting would review state affairs and make decisions on a “series of important issues.”

The meeting is likely to address the country’s COVID-19 outbreak. Officials at the World Health Organization said Wednesday they believed the outbreak was worsening and requested more information be shared with the U.N. health agency.

South Korean officials and experts have said Kim could possibly address relations with the United States and rival South Korea amid long-stalled diplomacy and reaffirm his ambitions to build a nuclear arsenal that could viably threaten regional U.S. allies and the American homeland.

During the North Korean party’s previous plenary in December, Kim repeated his vow to boost his military nuclear program and order the production of more powerful and sophisticated weapons systems during discussions that lasted for a record five days.

The North Korean meeting took place as U.S. Deputy Secretary of State Wendy Sherman met with her counterparts from South Korea and Japan on Wednesday in Seoul, emphasizing trilateral security cooperation in the face of the accelerating North Korean threat. She warned of a “swift and forceful response” if the North proceeds with a nuclear test but didn’t elaborate.

Sherman’s visit to Asia came after North Korea in its biggest-ever single-day testing event launched eight ballistic missiles into the sea from multiple locations on Sunday, prompting the U.S. and its Asian allies to respond with tit-for-tat missile launches and aerial demonstrations involving dozens of fighter jets.

Jolting an old pattern of brinkmanship, North Korea has already set an annual record in ballistic launches through the first half of 2022, firing 31 missiles over 18 different launch events, including its first demonstrations of ICBMs since 2017.

Kim may up the ante soon as U.S. and South Korean officials say North Korea has all but finished preparations to detonate a nuclear device at its testing ground in the northeastern town of Punggye-ri. The site had been inactive since hosting the North’s sixth nuclear test in September 2017, when it claimed to have detonated a thermonuclear bomb designed for its ICBMs.

With a new test, North Korea may claim it has acquired an ability to build a bomb small enough to be clustered on a multiwarhead ICBM or on Kim’s widening array of short-range solid-fuel missiles threatening South Korea and Japan, analysts say.

While the Biden administration has said it would push for additional sanctions if North Korea conducts another nuclear test, the prospects for meaningful punitive measures are unclear with the United Nations Security Council divided over Russia’s war on Ukraine. Russia and China have vetoed U.S.-sponsored resolutions that would have increased sanctions against North Korea over some of its major missile tests this year, insisting that Washington should focus on reviving dialogue with Pyongyang.

Nuclear talks between the U.S. and North Korea have stalled since 2019 because of disagreements over an easing of crippling U.S.-led sanctions in exchange for North Korean disarmament steps, which underscored Kim’s unwillingness to give away an arsenal he sees as his strongest guarantee of survival.

Boris Johnson could free a British-Egyptian activist detained in Egypt, his family say