LIFE is far from easy for the war-battered citizens of Kherson, but the sight of well-stocked shelves sparked tears of joy as the first supermarket reopened in the newly freed city.

Stores had shut and the prices soared for basic goods after Putin’s invaders seized the prized southern city in the first days of his illegal bloodbath war.

“This is the best day,” said merchant seaman Svyatoslav Karapenko, 51, as he and his wife bought snacks and sweets for their son at home.

“We have low prices again. The Russians had sweets but they were three times the price and not as good as ours.”

The branch of ATB — one of Ukraine’s largest supermarket chains — was festooned with balloons in the blue and yellow of the country’s national flag as hundreds of shoppers queued outside. 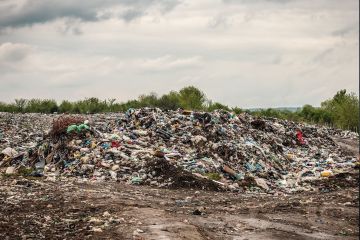 Store manager Larysa Matviishyna and her staff were hailed as heroes after working round the clock to get their flagship branch back in action.

Larysa had stayed in Kherson throughout the occupation and said it was impossible to get good quality staples.

She added: “The Russians opened some shops but the goods were really low quality and two or three times more expensive.

“A 1.5-litre bottle of drinking water that costs 15 Ukrainian hryvnia (35p) now, used to cost 50 (£1.15) in the occupation. It was like they sent us their worst produce and charged us three times more.”

A team from the supermarket chain raced to the store hours after the city was liberated. They found its windows smashed and shelves empty.

Sections of the road had collapsed, forcing traffic to divert through fields on muddy tracks flanked by red and white tape warning of land mines.

Workmen began repairs as Larysa and fellow managers scrambled to find staff to stack the shelves and work the checkouts.

Of the 100 staff that worked in the shop before Putin unleashed his slaughter, only 30 still remained.

Most had fled at the start of the war but a handful left in the autumn as Kremlin stooges bombarded locals with orders to retreat with their defeated forces.

Russian puppet officials spammed residents with text messages insisting they should take boats to the east bank of the Dnipro river.

We had 30 stores across Kherson but only three have reopened so far, so we called in workers from those shops to help.

Larysa rallied loyal staff from across a swathe of liberated Kherson province to fill the vacancies.

She said: “We had 30 stores across Kherson but only three have reopened so far, so we called in workers from those shops to help.”

They were greeted with glee by the joyous scrums.

The shelves were full of fresh fruit — including lemons, melons and pomegranates — as well as an entire aisle dedicated to drinking water.

The city has had no power, heating nor running water since November 9, when Russians blitzed power and pumping stations.

Moscow’s defence minister Sergei Shoigu ordered his troops to make a humiliating retreat after commanders said they could no longer supply their forces on the west bank of the Dnipro.

Desperate Russian attempts to build a pontoon bridge failed, forcing commanders to cede the only provincial capital they had held since the start of the invasion.

The city and the surrounding countryside was the only patch they occupied on the west bank of the Dnipro.

The retreat was acutely embarrassing for Putin after he ordered his local officials there to stage a sham referendum asking residents to join Russia.

When the fake vote delivered a predictable pro-Kremlin landslide he signed a raft of triumphant decrees, at a ceremony in Moscow, formally annexing Kherson, along with Donetsk, Luhansk and Zaporizhzhia provinces, into the Russian federation.

Days later his troops fled in chaos from a lightning Ukrainian counter attack east of Kharkiv which pushed into Luhansk.

Moscow’s decision to abandon the city spared it the scorched earth artillery duels that reduced cities such as Mariupol in the south, and Severodonetsk in the east, to a hell scape of flesh and rubble.

Men who stayed in Kherson said they had been terrified to leave their homes for fear of being abducted at checkpoints at tortured.

Ukrainian officials said at least 63 bodies showing signs of torture had been found outside the city.

On the occasions they had to go out, residents left phones at home so they could not be stolen or searched by Russian officials.

Others only went out in mixed-sex couples to look less suspicious, and they avoided main roads and junctions.

No power, no water, no heating — but we have freedom, we are in Ukraine. That is the most important thing.

Many workers and pensioners were forced to take Russian handouts — in roubles — as they could not draw government salaries or state pensions.

Others lost their jobs as factories and major industries closed. Desperate families get round one of the shortages of essential services by drawing water from the Dnipro to survive.

Hundreds of people gather each day in the city’s central square to charge their phones on generators next to temporary mobile masts and wifi points set up by the government and armed forces.

Many still queue for food handouts too. Yet amid the hardship there are the green shoots of normal life returning.

A handful of cafes have reopened, powered by portable generators, offering customers a caffeine fix and another chance to charge their phones.

At least one boasts a Starlink satellite terminal, which provides free wifi courtesy of Tesla and Twitter billionaire Elon Musk.

Billboards around the Kherson region had claimed “Russia is here forever” until workmen in cherry-pickers tore them down this week
Nonetheless, with strict military curfews still in place and no working petrol stations, luxuries such as watching a World Cup match remain a distant dream.

Hospital staff revealed they have no choice but to discharge patients faster than usual because there is no way to heat the wards.

However, maternity nurse Ilena, who was wrapped in a dressing gown over her scrubs to stay warm, said: “No power, no water, no heating — but we have freedom, we are in Ukraine. That is the most important thing.”

Iran suspends morality police. What does it mean?

US secretly tweaked missile launchers given to Ukraine to keep them from attacking inside Russia, report says

Mary Peltola will not toe the party line, in the nicest way possible

England are drawing up a tactical masterplan to stop Kylian Mbappe. Three Lions boss Gareth Southgate and his coaching staff