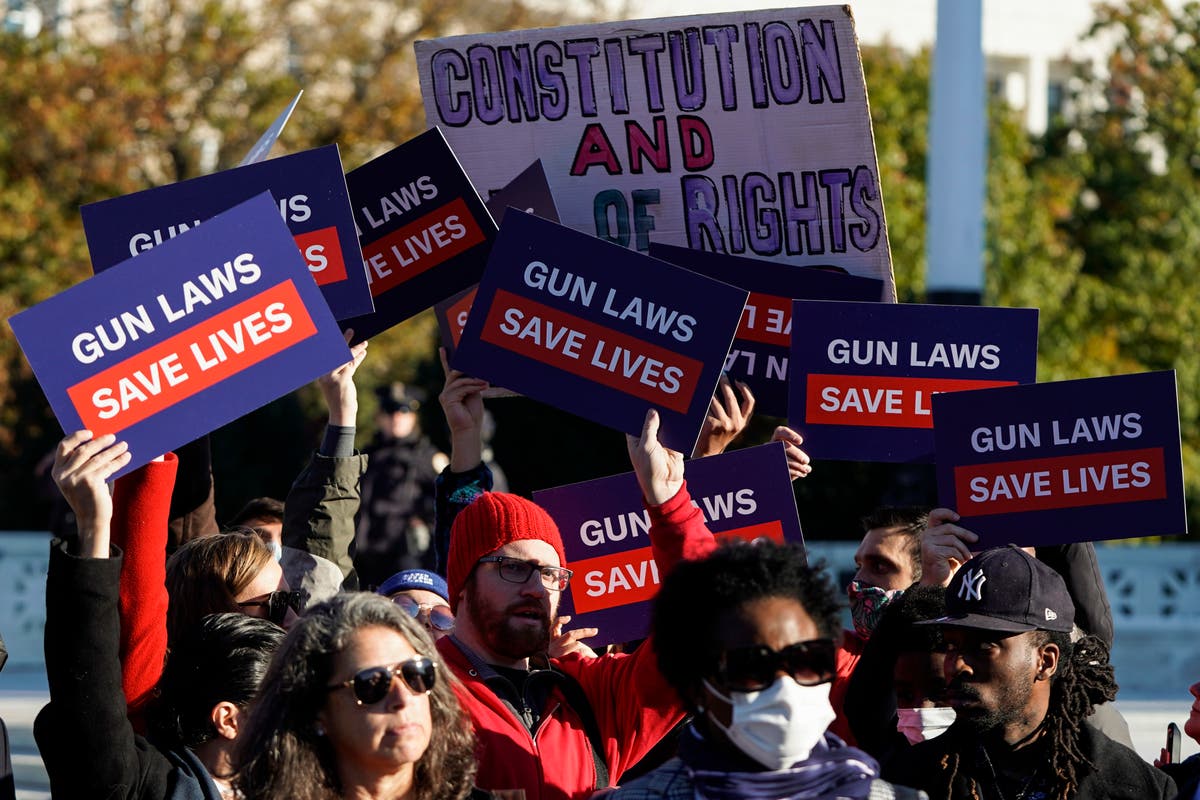 New York’s governer has attacked an “outrageous” Supreme Court ruling that makes it easier to carry hand guns in the state – and which has wider implications for the entire country.

After the Supreme Court – examining a case orginating in New York – ruled for the first time the US Constitution protects an individual’s right to carry a handgun in public for self-defence, Governor Kathy Hochul said the decision was the decision was “outrageous”, particularly as it came at a time of “national reckoning on gun violence”.

Her comments were a reference to the increased demand for gun regulation in the wake of mass shootings in Buffalo, New York, and Uvalde, Texas.

“In response to this ruling, we are closely reviewing our options – including calling a special session of the legislature,” she tweeted.

“Just as we swiftly passed nation-leading gun reform legislation, I will continue to do everything in my power to keep New Yorkers safe from gun violence.”

Her comments were echoed by many in the state, as well as the city of New York, and across the nation, where a a grass roots effort has helped set the way for the first serious bipartistan gun regulation legisation to be passed by Congress in three decades.

Congressman Ritchie Torre, a Democrat who represent the New York’s 15 congressional district, said: “The Supreme Court’s decision will will deepen the crisis of gun violence in NYC and beyond.”

He added: “Striking down the proper cause requirement, as SCOTUS has done, means allowing the average person a right to carry a gun in public, even in a city as densely populated as NY.”

Giffords, the gun control organisation established by former congresswoman Gabby Giffords after he was nearly assassinated by a gunman, said that as “gun violence has reached a historic high, this ruling imposes the gun lobby’s dangerous ‘guns everywhere’ agenda on all of us”.

It added: “Gun extremists wanted to open the floodgates on the public carry of firearms. We asked the Supreme Court to choose public safety and historical precedent. SCOTUS chose gun extremism instead.”

Kris Brown, President of the gun control group Brady, established in honour of Ronald Reagan’s press secretary James Bady, who was paralysed in the 1981 gun attack that nearly killed the president, tweeted as the decison was dropped “we are still reading through this disastrous SCOTUS decision”

She added: “But one thing is clear: Our safety from gun violence is at grave risk.”

It struck down New York state’s limits on carrying concealed handguns outside the home. The court found that the law, enacted in 1913, violated a person’s right to “keep and bear arms” under the US Constitution’s Second Amendment.

The ruling, authored by Justice Clarence Thomas, declared that the Constitution protects “an individual’s right to carry a handgun for self-defense outside the home”.

Mr Thomas added: “We know of no other constitutional right that an individual may exercise only after demonstrating to government officers some special need.”

The new ruling underscored how the 6-3 conservative majority on the court is sympathetic to an expansive reading of Second Amendment rights.

Under the New York law’s “proper cause” requirement, applicants seeking an unrestricted concealed carry permits must convince a state firearms licensing officer of an actual, rather than speculative, need for self-defense. Officials could also grant licenses restricted to certain activities, such as hunting or target practice.

The ruling could lead to many more people securing the licenses to carry concealed handguns in the state, undermine similar restrictions in other states and imperil other types of state and local firearms restrictions nationwide by requiring judges to scrutinise them with a more skeptical eye under the Constitution.

Later, Ms Hochul said she was pressing ahead with plans to sign into law a new measure that would require school districts to consider installing silent panic alarms that directly alert law enforcement.

The so-called “Alyssa’s Law” is named in honour of Alyssa Alhadeff, who was killed in the mass shooting at Marjory Stoneman Douglas High School in Parkland, Florida in 2018.

“Today, the Supreme Court is sending us backwards in our efforts to protect families and prevent gun violence,” the governor said, speaking to repoters.

‘No one was diving in’: Hero Olympic coach criticises lifeguards as she dives in to save own swimmer