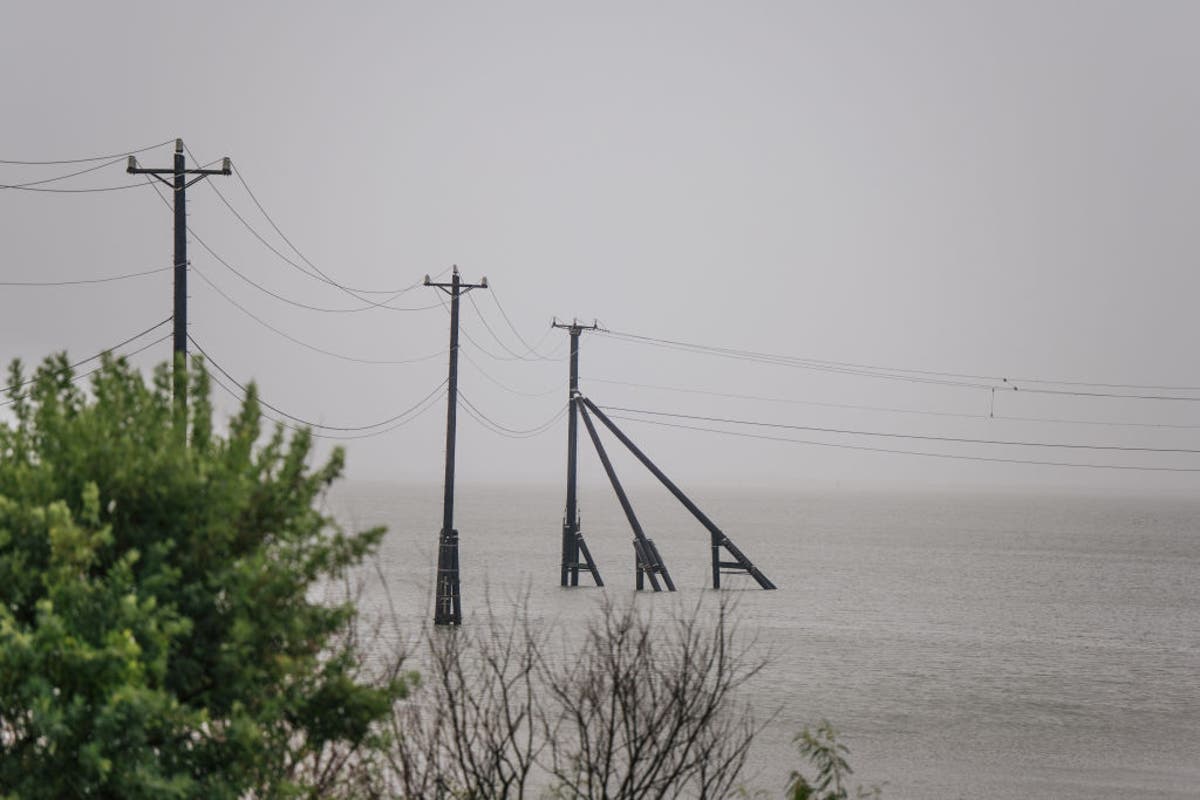 More than half a million people are without power after Hurricane Nicholas made landfall in Texas as a Category-1 storm.

The National Hurricane Center warned that the threat of “heavy rain, high winds and dangerous [tidal] surge” is ongoing.

Hundreds of thousands of homes were without power in the Houston area after the storm hit.

Utility company, CenterPoint Energy, reported on Tuesday that some 440,000 customers were without power as assessments of outages are still underway.

With winds of up to 75 mph (120 kph), Nicholas touched down on the Matagorda Peninsula, about 10 miles southwest of Sargent Beach in Texas.

Nicholas is expected to impact much of the same region that suffered widespread devastation from 2017’s Hurricane Harvey. Louisiana, which is still recovering from powerful Hurricane Ida last month, will also be impacted.

Nicholas is the 14th named storm of the 2021 Atlantic hurricane season.

The climate crisis is creating conditions which are driving more powerful storms with greater rainfall.

While it’s unclear whether the climate crisis will mean an increased number of hurricanes in the future, scientists have long warned that increased global heating will likely make the storms that we do experience more destructive.

The ocean absorbs over 90 per cent of excess heat caused by greenhouse gas emissions – largely caused from the burning of fossil fuels – and that warm water feeds into hurricanes.

And as the planet heats up, more moisture is held in the atmosphere, meaning storms hold the potential of a lot more rainfall. Global sea level rise is compounding the danger of storm surge.

“[Nicholas] will be a very slow-moving storm across the state of Texas that will linger for several days and drop a tremendous amount of rain,” Texas Governor Greg Abbott said.

The hurricane is expected to bring up to 20 inches of rain to parts of the Gulf coastline and threatened flash flooding.

“This city is very resilient. We know what we need to do. We know about preparing,” the mayor said.

At least 100 people died during Harvey in the city, which has suffered four major flood events in recent years.

Authorities shut down a number of schools along the Texas Gulf coast at the start of the week due to the incoming storm. Multiple Covid-19 testing and vaccination facilities in the Houston and Corpus Christi areas were also closed.

Middle and upper Texas coastlines are expected to receive 6-12 inches of rain with isolated maximum amounts of 18 inches possible. Southeast Texas, south-central Louisiana and southern Mississippi could see 4-8 inches of rain in the coming days.

Governor Abbott has requested locals to follow weather alerts and be on guard. “Listen to local weather alerts and heed local advisories about the right and safe thing to do, and you’ll make it through this storm just like you’ve had many other storms,” he said.

Calling it a “life-threatening situation”, the National Weather Service issued a range of warnings including storm surge, flood and tropical storm warnings.

Authorities have issued a hurricane warning for Port O’Connor to Freeport, along with a hurricane watch from Freeport to Galveston Island’s western tip, even though only a fraction of rain is expected compared to Hurricane Harvey.

Tropical storm and storm surge warnings have been issued for Port Aransas to Sabine Pass. The stretch from Sabine Pass to Louisiana’s Rutherford Beach is also being monitored for a storm surge.