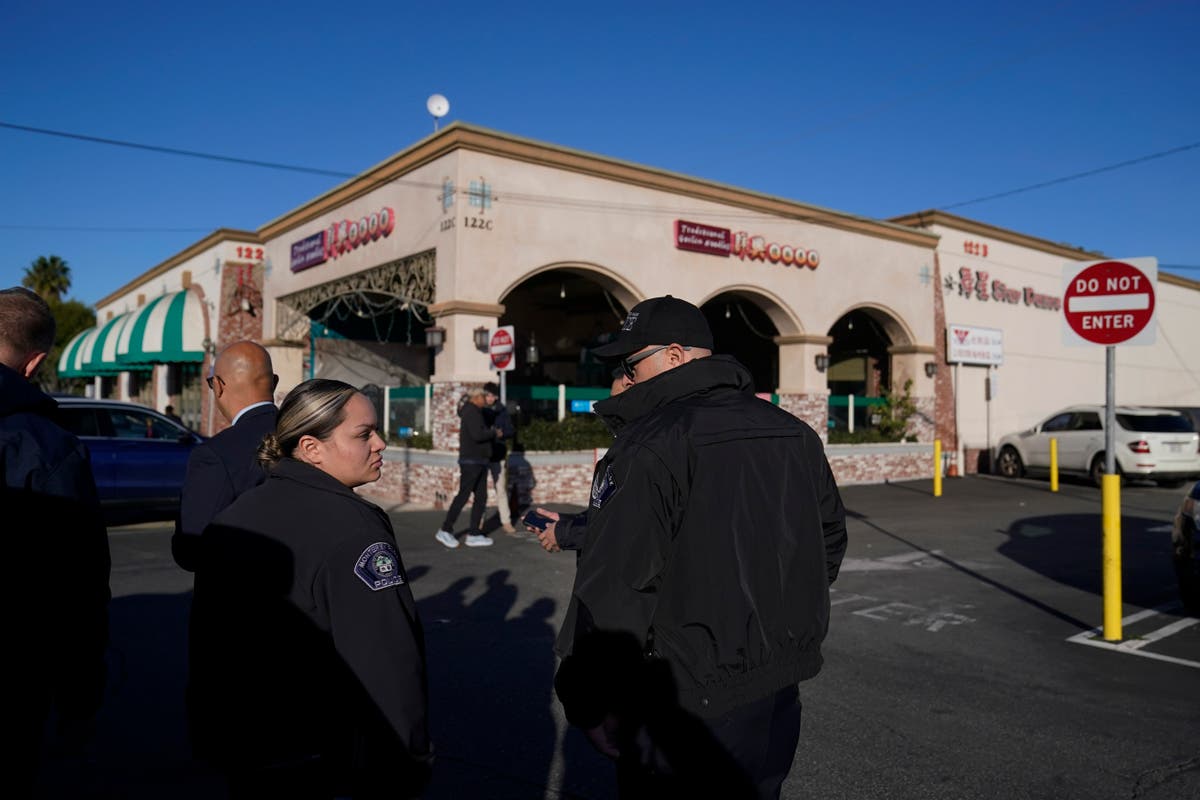 Monterey Park mass shooter Huu Can Tran, 72, had stockpiled hundreds of rounds of ammunition and was manufacturing gun silencers in the lead-up to Saturday’s shooting rampage, it has been revealed.

Los Angeles County Sheriff Robert Luna said at a press conference on Monday that a search of his home had uncovered a .308-caliber rifle, hundreds of rounds of ammunition, electronic devices and evidence that led investigators to believe he was manufacturing firearm suppressors.

While the motive remains unclear, Hemet Police revealed that Tran visited the police department twice in early January – once on 7 January and then again on 9 January – claiming that his family had tried to poison him decades ago.

The gunman told police he would return with documentation to prove his allegations of “past fraud, theft, and poisoning allegations involving his family in the Los Angeles area 10 to 20 years ago”. He never returned.

Weeks later, on Saturday night, he carried out a horror mass shooting at the Star Ballroom Dance Studio in Monterey Park, killing eleven.

Less than 48 hours on from the massacre, California was rocked by two more mass shootings – in Half Moon Bay and Oakland on Monday.

Tran had also made allegations of fraud and theft, apart from claiming that his family in the Los Angeles area had tried to poison him some 10-20 years ago.

Huu Can Tran is oldest mass shooter in decade

Monterey Park gunman Huu Can Tran is the oldest mass shooter in more than a decade.

Typically, there is a trend for young men aged 18 to 21 to carry out mass shootings while those in their 40s tend to be behind workplace-related incidents.

“We see two clusters when it comes to mass shooters, people in their 40s who commit workplace type shootings, and a very big cluster of young people—18, 19, 20, 21—who seem to get caught up in the social contagion of killing,” Jillian Peterson, a criminal justice professor and co-founder of the Violence Project, told The New York Times.

Overall, the average age of mass shooters between 1966 and 2020 was around 33 years old, according to the Rockefeller Institute.

At 72, Tran bucks the trend. Meanwhile, Chunli Zhao, aged 67, was arrested on Monday for a mass shooting that left seven dead in Half Moon Bay.

Monterey Park mass shooter Huu Can Tran, 72, had stockpiled hundreds of rounds of ammunition and was manufacturing gun silencers in the lead-up to Saturday’s shooting rampage, it has been revealed.

Los Angeles County Sheriff Robert Luna said at a press conference on Monday that a search of his home had uncovered a .308-caliber rifle, hundreds of rounds of ammunition, electronic devices and evidence that led investigators to believe he was manufacturing firearm suppressors.

As well as the firearms and ammo found in his home, police found a Norinco handgun registered to the suspect in the van where he died from a self-inflicted gunshot wound.

The gun believed to have been used in the mass shooting – a 9-millimeter semi-automatic MAC-10 assault weapon – was found at Lai Lai Ballroom in Alhambra after a heroic 26-year-old wrestled the gun from the 72-year-old when he turned up to carry out a second attack.

What we know so far about the victims of Monterey Park shooting:

Authorities have begun to publicly identify the 11 victims killed and nine others injured.

Of the 10 victims pronounced dead in the immediate aftermath, there was five men and five women. The gender of the 11th victim is unclear. All victims were in their 50s, 60s and 70s.

Meanwhile, friends also identified Ming Wei Ma – the owner of the Star Ballroom Dance Studio who had worked as a dance instructor there for many years – as being among the dead.

Mymy Nhan, 65, was among the 11 victims of the Monterey Park attack.

Nhan’s family members said it brought them comfort knowing that she enjoyed her “last dance” and died doing what she loved.

The 65-year-old had been a regular at both the Star Ballroom and the Lai Lai Ballroom for the last decade and had specifically chosen her usual haunt to “start the year fresh” with Lunar New Year celebrations, Ms Quan said.

Her mother had died three weeks ago and she had been looking forward to starting afresh, her niece said.

Instead, she was shot in her car as she was leaving the club.

Everything we know about Half Moon Bay shooting suspect Chunli Zhao

A 67-year-old farm worker is now in police custody and seven of his coworkers are dead following the latest mass shooting to rock California.

Chunli Zhao, who worked for decades as a farmer at a mushroom farm, is accused of carrying out two separate shootings at two different agricultural businesses in Half Moon Bay, the San Francisco area, on Monday afternoon.

The suspect, who was described as a “disgruntled worker” by officials, was arrested two hours later after he was spotted sitting in his car outside a local sheriff’s office.

As the farming community is left reeling from the horror double attack – believed to have taken place in front of children – many questions remain including who Mr Zhao is and what may have motivated him to allegedly embark on the shooting rampage.

Here’s what we know so far about the suspect:

Donald Trump Jr claims the media is ignoring the mass shooting in Monterey Park because it wasn’t carried out by a white conservative man with an assault rifle.

This is despite it being the lead story on almost every network and above the fold on every major news website. One notable exception is FoxNews.com where the story sits approximately a third of the way down the page.

As victims are identified and families grieve, the eldest son of the former president felt the need to tweet: “You think you’d hear a lot more about the mass shooting of 10 people in California… But don’t worry you won’t hear anything about it because it wasn’t done by a white conservative man with an assault rifle. Doesn’t work for the narrative so it basically never happened!”

Twitter users were quick to clap back at him.

The family of My Nhan, 65, released a statement honouring “a loving sister, aunt, daughter and friend”.

Ms Nhan was one of the ten people killed at the Monterey Park dance studio on Saturday night.

The statement was shared on Twitter by Ms Nhan’s nephew’s wife, Tiffany Liou, a reporter for WFAA.

“Mymy Nhan was the first person shot and killed during the #MontereyPark mass shooting,” she wrote.

“I’ve covered a lot of tragedies, and never imagined one would hit so close to home. My husband’s family is hurting beyond measure.”

The family statement reads: “It’s still sinking in what happened to Mymy. She spent so many years going to the dance studio in Monterey Park on weekends. It’s what she loved to do. But unfairly, Saturday was her last dance.”

“We are starting the Lunar New Year broken. We never imagined her life would end so suddenly. Mymy was 65 years old. If you knew her, you knew her warm smile and kindness was contagious. She was a loving aunt, sister, daughter and friend.”

“Mymy was our biggest cheerleader.”

US and Germany to supply Ukraine with fighting vehicles