Merck plans to double manufacturing capacity for its antiviral pill to treat Covid-19 next year as governments scramble to procure a treatment that a late-stage trial showed cuts hospitalisation and death rates in half.

The mounting demand for Merck’s drug, the first oral treatment shown to prevent severe disease in vulnerable people with coronavirus, is a sign that it could trigger the same kind of worldwide rush faced by makers of early Covid-19 vaccines.

Merck, which this week asked US regulators to authorise use of the drug called molnupiravir, told the Financial Times it had secured deals with Singapore, New Zealand, Australia and South Korea to supply doses in the past week and is in talks with several other governments.

The company has also agreed licensing deals with eight generic manufacturers to make cheaper versions of the drug, as concerns grow that demand may outstrip supply and deny access to poorer nations.

While Merck is the first company to seek approval for a highly effective Covid-19 antiviral, AstraZeneca on Monday said its Covid-19 antibody cocktail cuts the risk of severe disease or death in patients by half. It has also sought emergency authorisation for its drug, AZD7442.

Merck warned on Tuesday that its drug is no substitute for vaccines and would likely only become available, at least initially, to people most at risk of developing severe disease following a Covid-19 diagnosis.

Merck said it aimed to increase its own production from 10m courses of the drug this year to at least 20m in 2022, which is equivalent to 800m tablets. But it could provide no guidance on the likely production schedule or pricing for generic manufacturers, which will largely be responsible for supplying developing nations with the treatments.

“We are doing these special purchase agreements as a sort of initial way to get therapy to people as quickly as possible in certain countries and there’s a large number of them that we’re working through,” said Nicholas Kartsonis, Merck’s senior vice-president of clinical research.

“But I don’t want to underestimate the second tier of this, which is trying to get to as many people around the world as we can.”

Merck, which developed molnupiravir with Ridgeback Biotherapeutics, formally applied to the US Food and Drug Administration for emergency use authorisation for the drug on Monday.

So far, the only Covid-19 treatments approved outside hospital settings in the US are monoclonal antibodies developed by Regeneron, Eli Lilly and GlaxoSmithKline, which are typically given via intravenous infusions.

Health experts say the antiviral pill could become an important tool in the battle against the virus, as it can easily be taken at home. But some have expressed concerns over safety, efficacy and access issues.

“Molnupiravir is a welcome advance and could save hundreds of lives in the fight against Covid-19,” said David Dowdy, associate professor of epidemiology at Johns Hopkins University school of medicine.

“But it still isn’t a perfect cure . . . and it depends on people receiving the medicine early enough for it to be helpful,” he said. 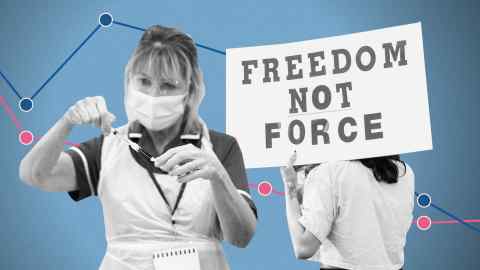 Merck’s stage 3 trial studied molnupiravir in patients who had tested positive for Covid within the first five days of showing symptoms. They also had at least one “risk factor” such as old age, obesity or diabetes that meant they might become seriously sick.

Unlike vaccines, which target Covid-19’s spike protein, molnupiravir acts on the virus’s RNA genetic material. This has raised concerns among some scientists that the treatment could cause cancers in humans, even though Merck’s clinical trial showed no ill-effects.

“We need to be cautious,” said Ronald Swanstrom, professor of biochemistry UNC school of medicine.

Kartsonis said Merck had done a very thorough analysis of molnupiravir and the safety profile was reassuring. The drug could potentially become a tool to prevent future pandemics, as some trials had shown it worked against other coronavirus, such as Sars and Mers, he said.

“Governments are going to have to consider: is this is a drug which the world needs to stockpile to meet future threats?”.

Amarinder hits back at Rawat, says Cong in pathetic state in Punjab